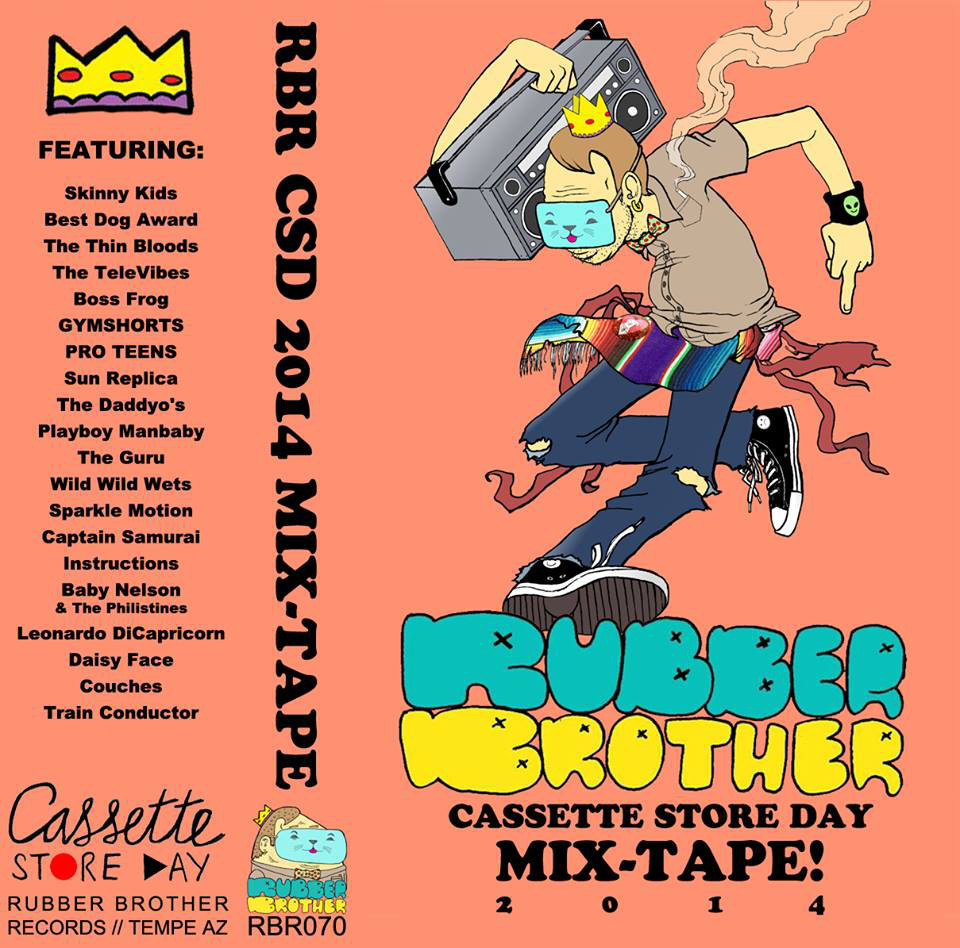 Rubber Brother Records fostered a cassette revival in the Valley of the Sun. Averaging more than one cassette release per week over the course of their very first year. The label decided to take part in this year’s Cassette Store Day – tape culture’s answer to Record Store Day – with a rad 20 song cassette featuring some of the bands they’ve worked with over the year.

To celebrate the release, Rubber Brother Records also hosted a show at the Trunk Space in downtown Phoenix. As many of you may recall, Tempe’s Parliament had been the label’s mainstay for some time, but after they were forced to close the doors on the establishment, some folks worried that the emergent scene would lose its unique cohesion, that sense of camaraderie that pervaded Parliament shows, but at the Trunk Space for the release, everyone could feel the spirit that lived on. And, when Rubber Brother calls for a gathering, it will continue to live on.

I got my copy of the Rubber Brother Cassette Store Day Mix-Tape to add to my very respectable tape collection. I must say that during my first listen of the songs I was pleasantly surprised. I mean, I expected to enjoy it overall, but with each new track I was constantly restructuring my list of favorites. It is ridiculously good. If this was the sole marker of what Rubber Brother Records has accomplished from the start of their operation, I would say it’s been time tremendously well spent. How many of the bands that I love on this compilation were introduced to me through their efforts and releases with the label? More than not.

I can listen to this collection from beginning to end without exercising my right to skip tracks. Favorite bands from around town like Boss Frog, Playboy Manbaby, and Instructions are featured on the Cassette Store Day Mix-Tape along with bands new to my knowledge-base like Baby Nelson & the Philistines from Guadalajara, México and Sun Replica from Warsaw, Poland. The inclusion of The Daddyo’s from Tulsa, Tucson’s Best Dog Award, and Tempe’s Leonardo DiCapricorn was the triple cherry on top. All three are bands I stumbled across this year and can’t stop listening to.

My favorite track might be “Talk Talk Talk” from The Thin Bloods. The band is just so fucking good. I just don’t know how else to say it. Other highlights include the party classic “Killer High Life” from Playboy Manbaby and “Sabertooth Boogie” from local funksters Boss Frog.

The tape offers a cohesive sampling of the Rubber Brother oeuvre. If you like any one of bands listed on the track list, you’re guaranteed to find another new favorite before you reach the end of the cassette. For me, that song was Sparkle Motion’s “Silver” and now I want to hear everything they’ve ever recorded.

Give the Rubber Brother Cassette Store Day Mix-Tape a listen and get your very own copy. It is more than a fabu collection of twenty songs for a bargain price, it is an object of commemoration marking a certain time and place in the history of music. Get yours.