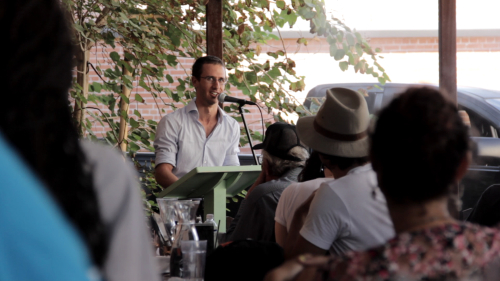 All photos by John Haas

You may have seen it in storefronts around Phoenix, or at a booth off Roosevelt and Fifth Street one First Friday. You may have come across pages and pages of stories, prose, and artwork from hundreds of contributors. Some contributors are experienced writers. Some are just having fun.  But many of them are local, from right here in the Valley. And if you haven’t seen Four Chambers Magazine yet… you will.

And who knows – you may be one of the authors published inside the pages.

Jake Friedman, founder and Editor-in-Chief of Four Chambers Magazine, didn’t start meeting people right away when he moved to the Phoenix area almost 3 years ago. He didn’t feel truly at home until he started attending local poetry readings and open mic nights.

“The interaction you have with people at those types of events – you get such a strong bond interacting with them; a bond you don’t get from walking down the other side of the street,” Friedman said. “Literature is how I met my friends here. Creating a bigger variety of events, a bigger physical existence of literature… we really are trying to build a community here, where people can come together and share something substantial and meaningful.” 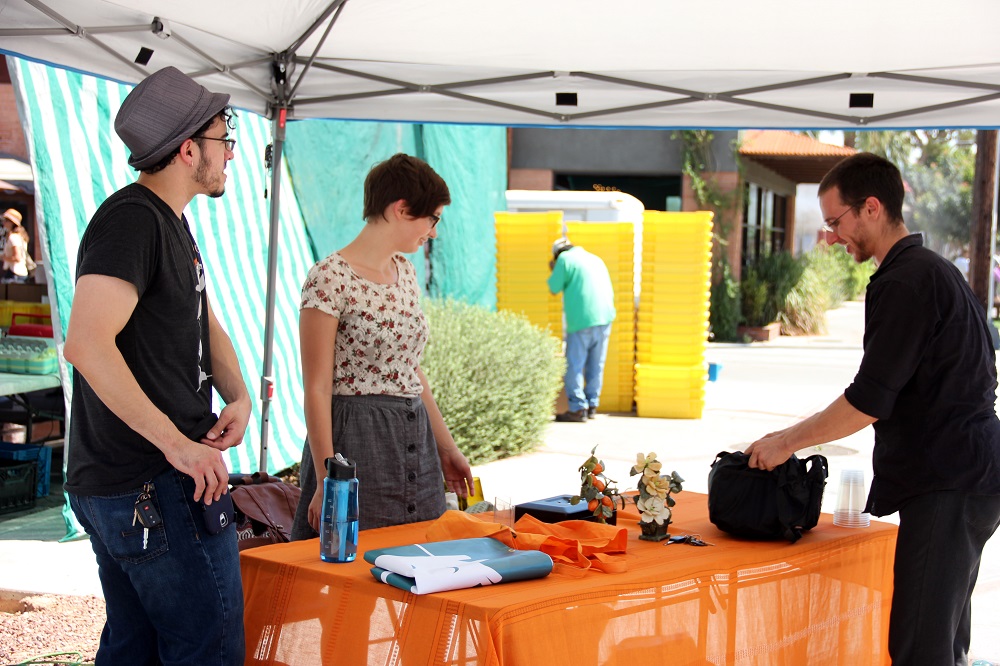 Friedman started Issue 01 of Four Chambers with a letter from the editor.

“We want Four Chambers to be a heart: something central, organic, and part of a larger body – that connects, supports, and circulates life,” he said in the letter.

Friedman is proud of how Four Chambers has begun growing into its own here in Phoenix. For its first issue, published in December 2013, the magazine received 912 submissions of literature, according to the Four Chambers website. For its second issue – set to be released this October – they received 1100.

“Four Chambers has been a really weird thing, that there’s a spot for us in Phoenix,” Friedman said. “That I have only been here 3 years and we have found a way to direct this energy from the community. We’re actually responding to what it’s like in Phoenix, the fact that you have to be more of an active consumer of arts and culture. This is a platform, a way to do what we do.”

Four Chambers, with Friedman at the helm, is still starting up – resolving issues as the magazine moves forward with each new edition released.

“We’re out there, we’re engaging,” he said. “We are not an underground arts and culture organization, and we don’t want to be. We want to be of value to people. That’s what I want – more public, more out there… We want to be putting people out there, putting ourselves out there.”

Friedman said there are an incredible number of talented people out there, especially around the Valley. And seeing as so many artists in music and visual art are testing new boundaries, trying new things and showing great vision in art today, he said Four Chambers is trying to do the same for literature. 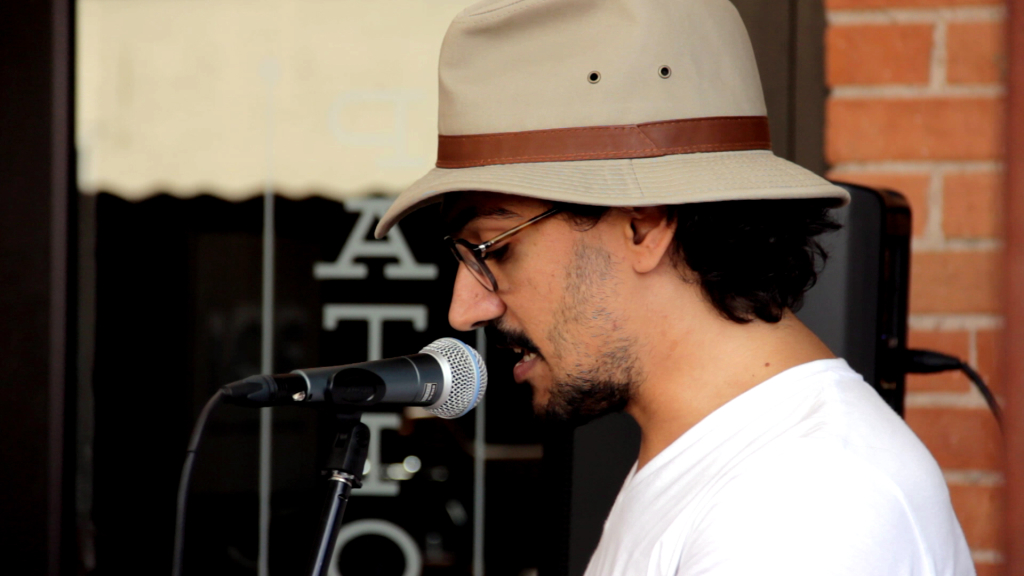 “Our staff and editors can respond to contemporary voices, as well as relate to the past,” he said. “This is bringing literature up to speed with the other art forms. We have some places where we can take literature seriously as an art form. We wanted to re-create the experience we had ourselves as we moved through Phoenix: ‘Wow, I didn’t know this was here – this is great!’”

“We try to publish diverse styles and tastes, and I think that’s to our credit,” Friedman said. “We have a pretty diverse board of editors – an ASU Phoenix professor, a literature magazine academic – all of us are coming from a place where we are familiar with contemporary literature.”

Rosemarie Dombrowski is a great example of Four Chambers’ talented, versatile editorial staff. Dombrowski is a professor of English at the ASU Downtown Phoenix campus. She said since she was in graduate school, she has been dedicated to contributing to a literary community which students and locals could plug into.

“As the Editor-in-Chief of the ASU downtown campus undergraduate writing journal, I’ve seen the value of student-centric publications to ASU writers and artists,” she said. “But these types of publications aren’t inclusive, which means there’s a need for something that reaches beyond those walls – something that can showcase the voices of former students as well as community members.”

Dombrowski said she is inspired by the collage of voices and styles of writing the community has shown in sending submissions to Four Chambers, as well as the varied backgrounds of individuals that come together for literature events around town.

“There’s genuine support and camaraderie amongst community members,” she said. “Additionally, we reach out and forge connections across the Valley and the country. I think most of us share a common vision – specifically, we want to foster the evolution of Phoenix into a dynamic, strong, and highly regarded literary and arts community.” 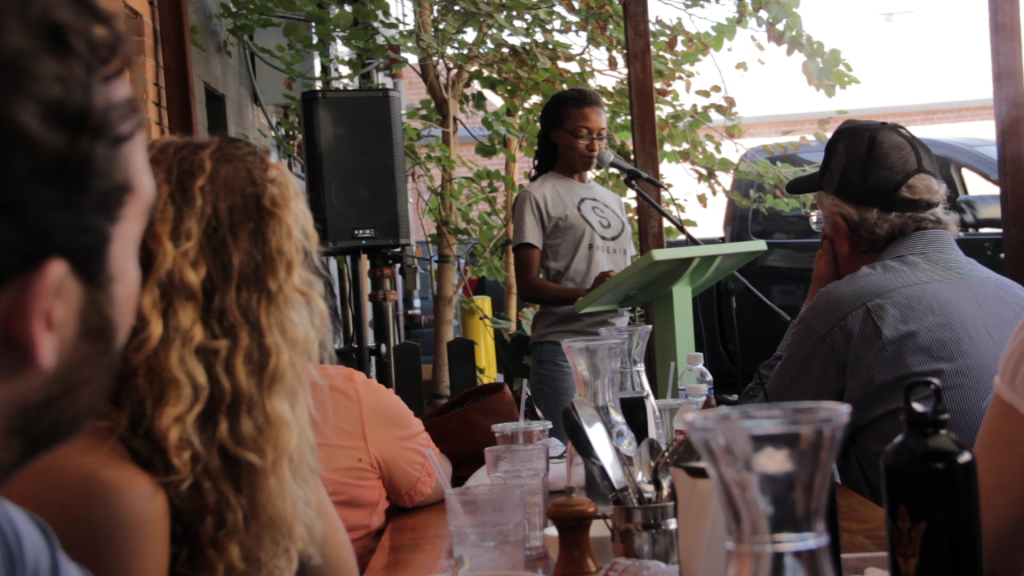 Dombrowski started an independent literary journal (Merge) when she was in graduate school.

“It was rogue and unique, and, admittedly, a little raw in the beginning,” she said. “But we grew our staff and our readership, eventually brought on an art director and went digital, and built a national readership. It was the most gratifying thing I’d ever done. Our founding staff was small but dedicated, and we were together for the duration of the magazine. I suppose I believe in forging families… comprising them out of people who share poetic visions and core philosophies. And I think we’re doing that at Four Chambers.”

Dombrowski feels contributing to the evolution of the literary arts community is the ongoing goal.

“I think fostering partnerships is the key to that – partnerships between poetic communities, between academic and community organizations, and between a variety of artists across demographics and genres.”

Four Chambers has goals beyond the magazine as well – goals that speak to fostering that growth and those partnerships out in the community. And the group is already well on their way, with literature events already across Phoenix – and even bigger plans in the works, involving collaborative mixed media and social readings, getting writers and the community to start something new… and to be truly proud of their town.

“This is what I love about local art,” Friedman said. “It doesn’t have to be literally local, but they are not celebrities. They have jobs – they are people just like us. Come hang out with us and do writing stuff. You can do this if you want to do this. Just to see somebody post, ‘I live in a cool place, I’m proud to live in Phoenix!’ If I helped even be partially responsible for something like that… there is nothing greater.”

Four Chambers Magazine is releasing Issue 02 at local participating venues October 2. A launch party at FilmBar begins at 7 PM, featuring Travis Mossotti and Where Are All the Buffalo? Submissions for Issue 03 will be accepted until November 28. For more information about Four Chambers Magazine, local Four Chambers events in the community, or how to get involved with the magazine, visit fourchamberspress.com. 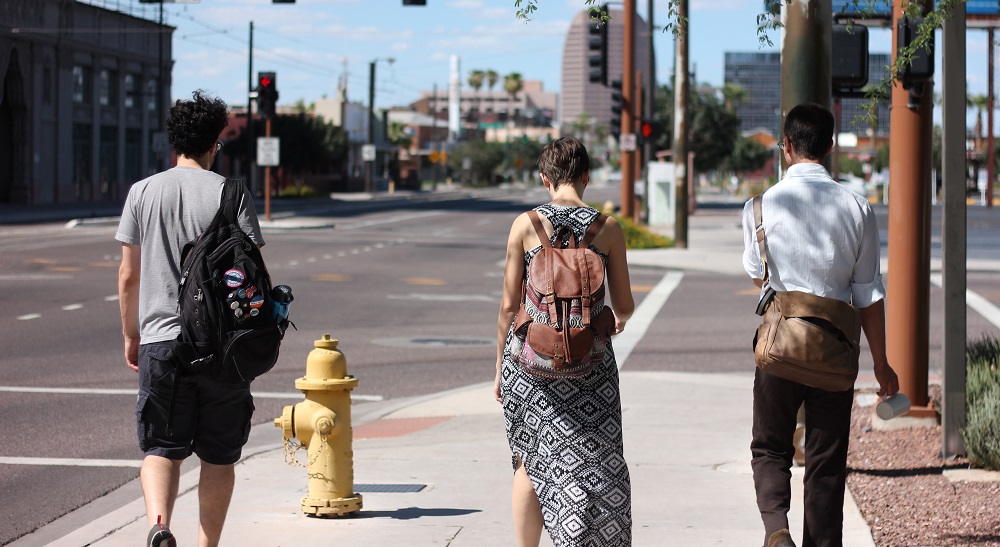