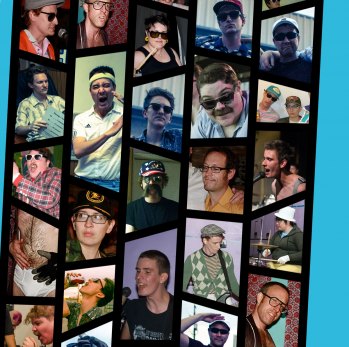 Fathers Day has been shaking up the local scene with their unique brand of punk for, well, a whole decade now. Yes, folks, ten years of the irreverent dad rock we’ve come to know and love.

There have been several changes to the lineup over the years, all of whom adopted a “dad” moniker for the band. Many of the changing crew appear on the cover of the“…It’s Called A Separation”: 10 Years of Fathers Day.  Over the years, Fathers Day has worked with Tristan Jemsek (Drunk Dad), Emily Spetrino (Classy Dad), Diana Welsch (PTSD Dad), Dave Driscoll (Single Dad), Toby Fatzinger (Little League Coach Dad), Jason Kron (Conspiracy Theory Dad), and Ben Nandin (Step-Dad), amongst others. Ray Reeves even signed on for a short while, but he didn’t have a paternal alter-ego because, and I quote, “because he is Ray Reeves and he is an amazing drummer and played drums for Bob Seger(we figured that’s dad enough)”. Only Andrew Jemsek (Golf Dad) and Ryan Avery (Business Dad) have held to the lineup since the inception of Fathers Day.

Avery, the man with the moniker of Douglas Patton, is a born performer. As Patton, he appears determined to deliver a memorable show every time he gets on stage and this has proven to be the most impressive facet to this longstanding local act. Any band can keep up a long-running joke concept, but Patton really sells it to us by completely disregarding who he is outside of Fathers Day when performing with Fathers Day. Total immersion.

This is a very difficult album to write about. Writing forces judgement calls and I really don’t know if I like Andy Warpigs’ cover of “Did I Use the Word Divorce?” more than Soft Shoulders’ version. Stylistically, the album proves so eclectic it’s sometimes difficult to remember that you’re really hearing the same song 16 times. Even the tracks vary in length which wouldn’t surprise me too much except for how disparate those numbers are. From 420’s 31-second version to Soft Shoulder’s which clocks in at just over 5 minutes long.

Everyone has their own approach to “Did I Use the Word Divorce?” Django Ramone puts a lounge spin on the number while Serene Dominic takes some artistic liberties, both lyrically and musically. Many of the bands I recognize from the local scene, but a few new names were introduced to me by “…It’s Called A Separation”: 10 Years of Fathers Day.

Okay, the Treasure Mammal track might really be my favorite. It is the first moment in perhaps the span of Fathers Day that the band breaks character on an album for the inclusion of a short monologue from the real life father of Ryan Avery (a.k.a. Douglas Patton) discussing some of the larger implications behind the project. The misogyny and aggression, the bad dads. The track was in fact recorded by Abe of Treasure Mammal who works with Avery’s father.

In truth, the original will always be my favorite. You can hear the Fathers Day version of “Did I Use the Word Divorce” here, but you really want to want to check out “…It’s Called A Separation”: 10 Years of Fathers Day.  Listen/purchase here. Do it or your grounded.