The fresh sythnpop of Robots with Rayguns always gets a cheer down at HQ whenever a new release looms in the approaching distance. “One More Time” is the first release from Fresh As It Gets, the latest EP from Lucas Patrick Smith also known as Robots with Rayguns. This marks the third full-length from the project. “One More Time” definitely found a spot on my gym playlist and maybe even my next party playlist. It’s made to get people moving. Listen here. Album drops at the end of the month! 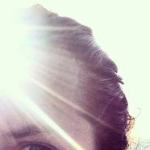 “Giving Up the Ghost”

Putting an indie rock spin on electronica, Elmo Kirkwood has been posting tracks from his recent forays into experimental music. “Giving Up the Ghost” is my favorite of these endeavors. The tracks are part of a new LP that Kirkwood is planning to record on his iPhone. Yeah, this shit is crazy. He’s using apps like Garage Band to mix samples and arrange tracks. Technology, kids. And it’s probably a good thing that Elmo’s opting for the phone over the studio for this project because it looks like he’ll be touring this Fall with the Meat Puppets. I suggest checking out “Giving Up the Ghost” here and continuing onto other tracks available through the artist’s Soundcloud page. 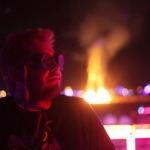 I Must Be Dead

The photographer we all know and love has been indulging his other love… music. “Sex Machine” is an early endeavor into the world of sound production. There is something dirty about “Sex Machine” and it’s not just the inclusion of an orgasmic (literally) vocal track. It’s exactly the sort of musical experience I would expect from the sex-crazed, drug-addled (or aided?) creator of the visual experience that is I Must Be Dead. Listen here. For more about the photographic arts of I Must Be Dead, head here.

The innovative experiments in sound that Lorne Mills releases as Cable Car Crash are as innovative as they are enjoyable. For “Esprit En Rose” the artist deconstructed Louis Armstrong’s “La Vie En Rose” and Four Tet’s “Spirit Fingers” and reassembled the pieces in for his own musical purposes. The result can be heard here. You won’t find just a musical mash-up, but a totally re-imagined piece that integrates elements of its predecessors fluidly.