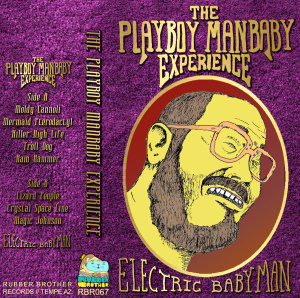 After another sold-out show at the Crescent Ballroom, Playboy Manbaby fans now can get their hands on the latest cassette and (dare I say?) the best album from the band. Ever. It’s true. Electric Babyman, which was released to expectant fans on Saturday, August 23rd, finds the Manbabies moving beyond those adolescent phases of self-doubt into the realms of hard won self-confidence in the band and the sound that is the Playboy Manbaby Experience.

Now, I’ve been a Playboy Manbaby fan ever since their 2012 self-titled debut… which, upon revisiting, sounds like a beautifully reckless fiasco from the distance of a few more recordings. Both Playboy Manbaby and Obsessive Repulsive (their sophomore release from 2013) were home-recordings that, at their core, were valued most as a reminder of the tremendous live performances put on by the band. I can always listen to “Funeral Pizza” or “Minivan”, no matter how shitty the recording, and enjoy that rush of energy echoing from the delivery of live shows.

For their last recording, Playboy Manbaby stepped up their game and stepped into the studio. In a recent exchange, frontman and vocalist for Playboy Manbaby – Robbie Pfeffer – explained, “On our last release, Bummeritaville, we recorded with Jalipaz [of Audioconfusion] for the first time and that was right when we started taking things a little more seriously. It was definitely a huge step up for the band. But looking back at how we were thinking when we were recording that album, we were a lot less comfortable with where we fit in the music world than we are now.”

Bummeritaville boasted a grueling, one-day recording schedule for eight tracks. Many of the songs were recorded in single takes with lyrical content that ranges from full-of-feist to totally incomprehensible. And, still, I found the album enjoyable from beginning to end. The band’s true draw lies in their originality, their unconventionality, and everything that keeps them from fitting in ultimately makes them wonderful.

For Electric Babyman, Playboy Manbaby opted to return to Audioconfusion to work with Jalipaz. This time, they allotted two days in the studio for eight tracks, but many of the songs were newer, still not totally familiar to the players. According to Pfeffer, “Of the 8 songs we recorded 5 of them were made in the last month and 4 of them had only been practiced in their entirety maybe once or twice before we went in to record. We’re all very used to working under pressure, but this deadline was completely absurd.”

“The album is really schizophrenic,” he continued. “Which probably comes from how we write stuff, we only write songs as a group. Which is awesome because it means everyone has an influence on what comes out. I’ve always hated recording music because I though of it as tedious and inorganic. But with the help of Jalipaz and the fact that we are in a really good spot as a band really made this album our least sucky album so far, and I actually had a really good time doing it.”

The result of this controlled “schizophrenic” endeavor is one of the best albums of the summer. Opening with the anthem “Moldy Cannoli” gets the blood rushing with its convolution of fun and rage. “Mermaid Pterodactyl” – the second track – holds court as my personal favorite, arguing, “I don’t got time to work at minimum wage / I got a lifetime of adolescent rage”.

By “Troll Dog”, the music writer in me has decided this is definitely punk, but unlike any other punk outfit I’ve heard before: one that merges a sea of influences as wide as the array of cultural references that also shaped the band. Much more than sugar cereal and Saturday morning cartoons, Electric Babyman channels all that discontent into a ruckus party with songs like “Lizard People”.

And, despite my labeling the album as “punk”, there are disparate elements that push the boundaries of that definition in strange new directions for both the band and the genre itself. Ska, metal, pop… no genre is beyond the reach of the Playboy Manbaby melting pot of sound.

Electric Babyman offers fans a more solidified sound and a stronger sense of self than we’ve ever heard on the band’s prior recordings. And, it almost seems as if no one was more surprised about this development than the band. When I asked Robbie about the experience, he replied with “Considering the fact that we had to go from writing the songs, recording them, mixing them and then duplicating them onto physical media in less than a week, I figured this album would be a mash-up of half-baked garbage. But something really wacky happened. Out of this weird adrenaline fueled panic we actually managed to pull out the best piece of recorded music I think we’ve ever done. I’m generally a pretty self-critical guy, but when I listen to these tracks I’m actually proud of them.”

Easily the band’s greatest album to date, Electric Babyman  offer eight tracks of fiery punk rock for all you high-strung kids out there. The first four tracks from the album are available for streaming through Bandcamp here, but you’ll have to cough up five bucks for the complete album. You won’t be disappointed. Eight songs and more than a dozen underwear-clad men with every cassette… 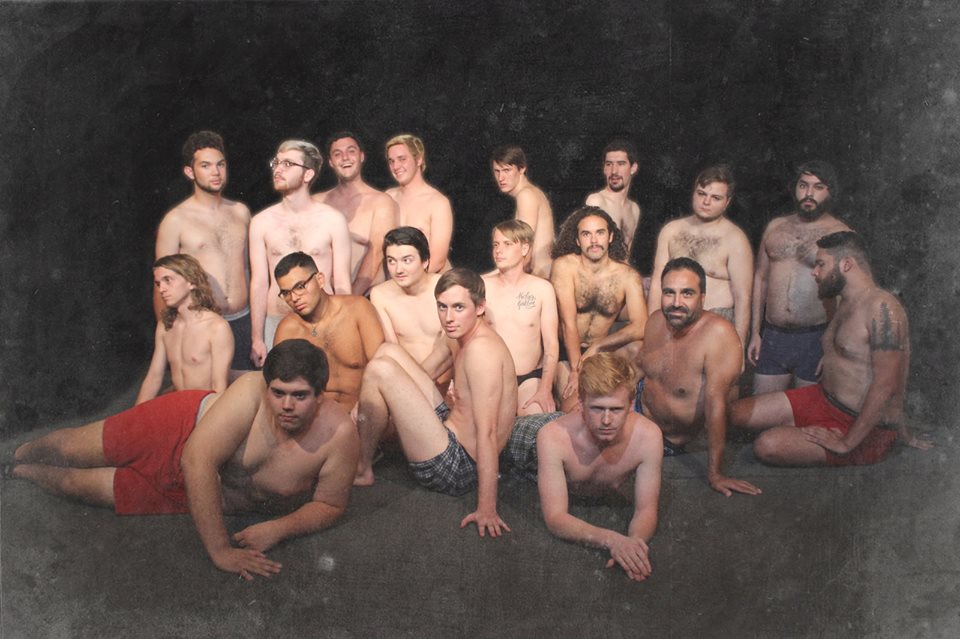 Photo by Eryn Wise from the Playboy Manbaby cassette insert.