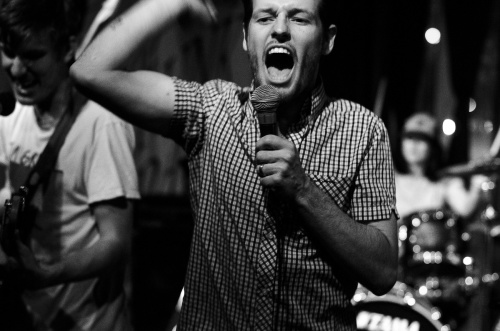 “Vengeance”, the first track off the new Liam and the Ladies album Tour EP, strikes at the heart of the Ladies’ enduring and growing presence as one of the premier ska acts in the Valley. They’re inflicting righteous retribution on those who would dare say “ska is dead.”

Sure, the only lyrics are a fistful of “Hey!”‘s in “Vengeance”, but I think each one is a shout out to the demons that break up bands. Even through revolving members, limited releases and other work/commitments, Liam James T. Murtagh has lead his valiant Ladies t’wards shimmering triumph. This isn’t mere words folks. L&TL have not only opened for some stellar bands of late, they’ve been the band to open for some of ska’s better-known acts.

More on that later… “Never Get Along” is the second track on the EP and it’s staccato rhythm and build-up perfectly matches the “You can try but we’ll never get along” theme of the lyrics. “Better” arrives next and is one of my favorite tracks on the album. The juxtaposition of the organ and saxophone on what is essentially an instrumental chorus is a melody that will stick with you for days and put you in a better state of mind while the words, “It has to get better because it can’t get much worse” will fuel you through another mundane day of existence.

Now I can admit it, this isn’t the first time I’ve written on L&TL. I first wrote on them back in 2010 and since that time they have risen the ranks of skadom to become the dancehall leading, number one soundsystem playing ska band in this desert-isle. I mean it. Within this last year alone they have opened for such ska mega-acts as: the Aggrolites, Buck-O-Nine, Mustard Plug, the Slackers, Voodoo Glow Skulls, Mike Park and Dan Potthast – becoming the backing band for the final two men and delivering their songs, and classic ska covers, in their full glory. Now, these names might mean nothing to you. But in the world of modern-day ska music, they’re huge.

“Tonight”, another great track and favorite, comes in at number four on Tour EP . The song is beautifully led by the harmonic tenor and alto saxophones provided by Aaron Goodman. When Claire Griese’s drums and Tristan Jemsek’s guitar come in, the track is full on groovin’ before it  breaks way down to showcase the bass line of Alex Cardwell. “Put on your best, brand-new second hand dress because tonight baby we’ll make a mess,” is my favorite line on the whole album. Liam, in addition to exceptional leadership, also provides guitar and organ on the EP.

As the name implies, the Tour EP was originally created for the Liam and the Ladies’ West Coast Tour. They kicked the tour off at the Trunk Space on June 25th before taking a week to go up and down California. I spoke with Liam in an online exchange where he informed me, “we basically wanted to throw something together to have on tour (thus the tour kick off being the CD release), so we recorded the whole thing ourselves, at both Tristan’s house and Alex’s houses, did block-printed sleeves, the whole deal.”

The upbeat “Get to Your Head” is fifth on the EP and, while starting in a more traditional manner of ska, ends with a punk rock finish. As the song does a key change at the end and everyone chimes in on the gang vocals, the band gets a chance to show off – including another wicked Alex bass line.

The Ladies incorporate all the elements of ska’s 50 year history to create their own unique sound. I feel they sound as much like the Aggrolites and the Slackers as they do the English Beat and the Specials. They’re definitely more doo-wop than punk rock, and that’s a good thing. This is made none more evident than on the track “Sights Too High”. With it’s straight-from-the-50s feel and sound, including a rollicking sax solo and the lyrics “I’ll be yours and you can be mine,” this is the longest track on the album (finishing off with some lovely disdain).

The instrumental “End of Wave” is next and truly does blur the borders as to what “wave” of ska this track can be defined as. Part pop, part surf, and part soul, this song showcases some of the finest playing on the entire EP. Ok ok, there are vocals in the form of “Bop bop bah” that follow the melodic lead of the track provided by the entire band. Throughout the album, the Ladies got help with vocals from their friend Spencer and if you listen hard enough you may just hear Steven FullStop and Betty Beat from KUKQ singing along as well.

The final track, “Working Week” is another personal favorite and a wry look at the work week and the weekends that come before and after it. Featuring a party in the background and more of Aaron’s sweet sax, the track – and album- ends with a toilet flushing. There are many ways to interpret this but I prefer to think of it as flushing away the weekend-induced technicolor rainbow as opposed the ‘ok, this shit’s over’ approach. I didn’t actually ask about it so I’m left wondering all by my lonesome.

When I asked Liam if there was anything else he could bring up about the album he responded with, “We were recording the Tour EP until about 5 days before we left, got done mixing about 2 days before we left and were literally stuffing the sleeves on our way to the show. It’s kind of the Ladies style… Also, shout-out to Gabriel King Radley, who took the photo that is printed on the disc. That dude is the nicest, and does great work.”

Liam and the Ladies Tour EP is a must-have for any ska aficionado. And, chances are, if you’re a real ska fan you’ve probably already seen the act live opening for one of your favorite touring bands. Check out and download the Tour EP on Bandcamp here. You can catch Liam and the Ladies open for Five Iron Frenzy this Thursday, Sept. 19th at the Nile Theater in Mesa. Click here for more info.