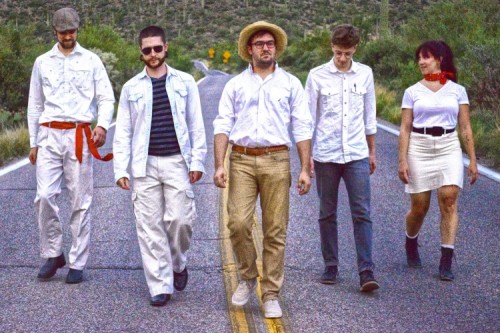 Every song is different. Ask Tucson group Sun Bones, and they will tell you all four members had a big role in writing different parts of the songs on their debut album, Sentinel Peak.

“It’s really different from song to song, from person to person,” said Sam Golden, vocalist and lead guitarist for Sun Bones. “It feels very comfortable writing for our group. We’ve been together for so long, we can play to our strengths and vocal harmonies. We can read each other’s body language, and even just listening to each other. We know each other and the songs so well, it’s easy to go off the beaten path of how we do our songs… It keeps us on our toes.” 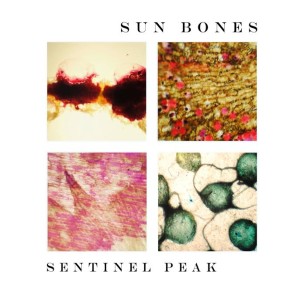 Golden said once the group writes a new song, it is only the beginning – they also continually change older songs to play them in new ways.

“I would not want to be in a band that plays the same songs gig after gig,” he said. “It’s constantly evolving…  I hope to give fans a fun new experience every time they see us.”

The group has already gone through changes leading up to this point, from a young band, hastily named to make the deadline of a high school battle of the bands, to recording a new album at the studios inside the University of Arizona.

“We recorded that album ourselves,” said Seth Vietti, Sun Bones drummer and vocalist. “Our ambitions were much greater than our actual talent. We had so many great ideas, and we forced them into the recording, but we had no idea how to re-create it live.”

Then under the name Boreas, the group went out on one tour, but by the time they returned, the music had changed so much from all they had learned from their time performing live onstage, the group evolved once more. Besides, the trio of Golden, Vietti, and bassist Rob Hanshaw had recently added guitarist and percussionist Evan Casler to their roster.

“He brought something new, this punky swagger,” Golden said of Casler. “It changed our songs and changed our sound. We are known for our energy, and Evan brought a lot of that energy. He is always dancing with crowds; jumping off stage… he’s great.”

Vietti said it seemed as if the name Boreas was holding them back, and with Evan now in the group, the sound changed considerably. And when the name “Sun Bones” came to Golden in a dream… it all fell into place.

“It was a good move,” Vietti said. “It was a good name. Sun Bones works. We wanted to sort of evoke the local desert vibe as a part of our sound, and we were so grateful to Tucson, so it worked out.” 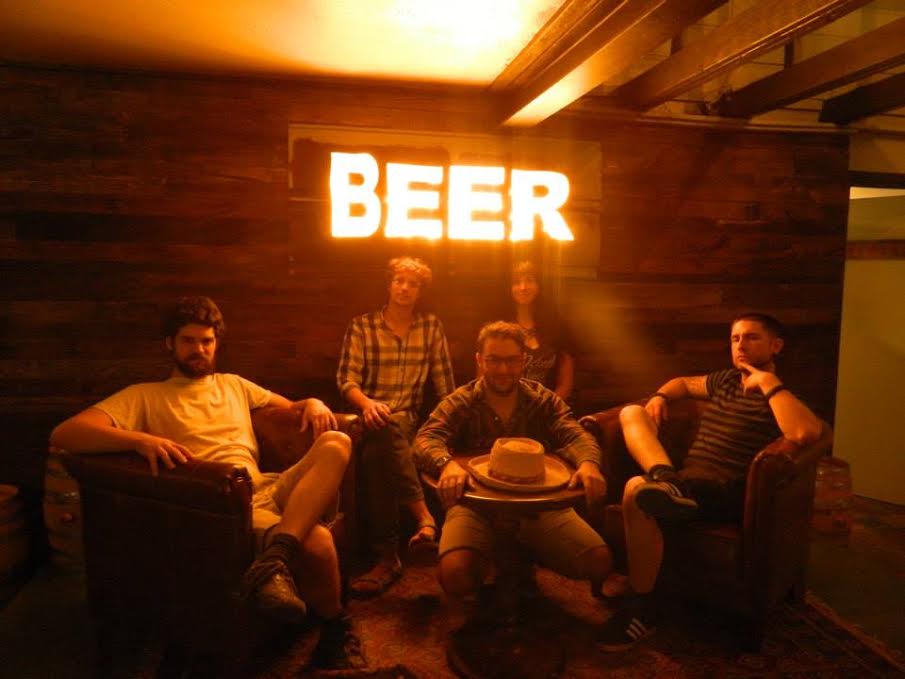 Golden also commented his dream-inspired band name has a very Tucson sort of resonance – a very desert-like name, so they wear it with great pride, showing homage to their hometown and its fantastic music scene.

“I like Tucson’s musicians,” Golden said. “There’s a lot of stylistic diversity in Tucson’s sound; a lot of open-mindedness in the Tucson scene. I’m really excited to see where it’s going from here.”

Casler agrees with Golden, and admires how mutually supportive – as well as mutually ambitious – the Tucson music scene can be.

“And it keeps on getting better and better,” Casler said. “The musicians in town are here to support one another, while in other towns we’ve seen, it’s dog-eat-dog: if your band succeeds, it is taking gigs away from my band. In Tucson, bands support each other, and recommend groups to similar groups so they can perform together, and in turn, succeed.”

Casler said Sun Bones, as well as most every group in Tucson, truly values their city’s music ecosystem.

“In order for there to be a really healthy music scene, there has to be good local music playing all the time. It just makes sense to make sure this happens – for them, and for us. All you have to do is keep your ear to the ground, and you’ll find great music. It’s a really great time to be a musician in Tucson.”

Sunday evening, Sun Bones proudly announced they were welcoming one such great Tucson musician into the Sun Bones ranks as the group’s fifth member: Laura Kepner-Adney.

“I’m really excited,” Golden said of their new fifth member. “We toured together with her about a month ago. She adds something new and awesome to the Sun Bones – it’s really rewarding and fun.” 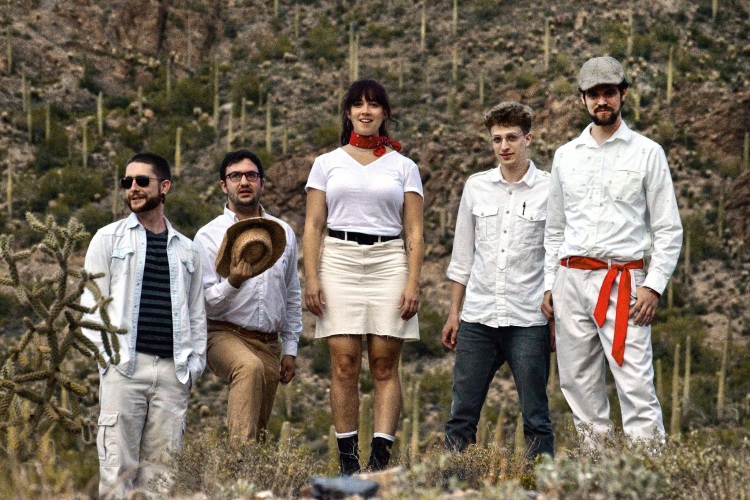 Vietti agrees, and looks forward to the talent Kepner-Adney brings to the group.

“Her voice is amazing, it really cuts through our 4-man group,” he said. “Her musical references and talent for melodies are fantastic. She’s been great to play alongside.”

Together with Kepner-Adney, Sun Bones will soon begin work on their second album. Casler said their debut album, Sentinel Peak, was very eclectic, and did a good job representing the varied tastes of the members of the band.

“We are very proud of that album, but some songs didn’t quite fit,” he said. “It accentuated each voice individually. But in our new album we are working on, we are trying to make one musical statement; something someone can listen to front to back and gain one story from the album.”

Casler said with their upcoming album, Sun Bones are working to find their own sound.

“There was a different sound for every song before, but now we are trying to find the Sun Bones sound,” he said. “We are becoming less and less a group of individuals, and more one being with multiple limbs. We know enough about our own musical styles that we talk less, and it just happens more naturally. It’s a process, but a fun one.”

The group has begun recording their new album, and producing songs they can really be proud of.

“It’s a good problem to have, where we have too many songs to record,” Casler said. “Then we just get to decide what to do with the others. We choose only the best, the ones that best fit with our voice as a group. It’s good news that every time we come up with a new song, that becomes my new favorite song. That is further proof of why I love doing what I do.”

Meanwhile, the group plans on heading north to the Phoenix area in the near future, including a show at the Yucca Tap Room in Tempe on September 21 with Kepner-Adney, under the group name Laura and the Killed Men.

We’re really just there to interact with the audience, and have a positive impact on the crowd,” Casler said. “We really like having this mutual support: we like to entertain you, but you support us in return. If you’re ready to participate – dance, snap, and clap along – you’re pretty much assured to leave the audience smiling.”

Vietti said Sun Bones tries to head up to Phoenix once a month, and the group is excited to play for new crowds in a different city.

“We just want to make our music with appreciative people,” he said. “We have a lot in common, Tucson and Phoenix: we’re all desert rats. I’d encourage everyone to check us out, listen to us, and feel some warm desert heat coming off the stage.”

Visit their webpage for more info. You can listen and purchase Sentinel Peak on Bandcamp. 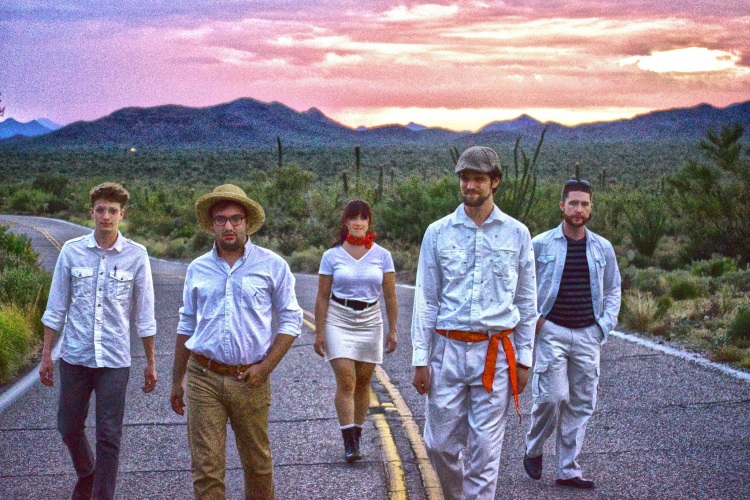