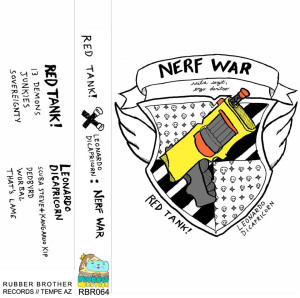 This split cassette release off the Rubber Brother Records label out of Tempe comes with a walloping seven tracks as opposed to the usual 2×2 we get find on splits. Somehow that feels like an extra bargain once you get into the goodness contained therein. Leonardo DiCapricorn kicks things off on the digital stream, proving once again that they’re much more than a snappy name. Songs like “Ded Byrd” and “That’s Lame” capture the band’s live energy – all you’re missing are dozens of thrashing bodies moving to the music. To be honest, I can’t get enough of “Worbal” with breakup lyrics everyone can support. Red Tank! begins their side with “13 Demons” which, even I must admit, sounds way better digitally than it does on cassette. At first, I was a little worried about what I would have to write when I listened to the tape, but the surf sound and layered vocals lost that muddled quality when I utilized that digital download code that came with my cassette. “Junkies” has that beachy sound that will have you in a sway of summertime nostalgia. I definitely recommend taking this split for a spin (metaphorically or literally). You can listen/purchase Nerf War here. 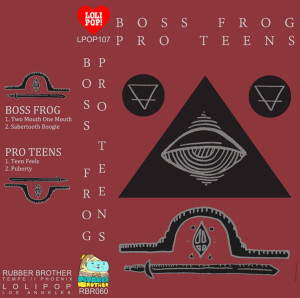 Boss Frog kicks off the cassette with their song “Two Mouth, One Mouth” and, instantly, the mellow moving funk took hold. These are some seriously talented players with a very individualized sound, something we sadly don’t hear enough. “Sabertooth Boogie” – also from Boss Frog – gives you something weird to dance to. The B-Side (or track 3 and 4 for those digital listeners) comes to us from Pro Teens, relative newcomers on the scene that have created quite a stir and played with many of our favorite AZ acts including There is Danger and Prom Body. “Teen Feels” offers a throwback surf sound with a healthy splash of musical modernity. In “Puberty”, Pro Teens push the experimental end of their pop sound for a memorable number I can’t wait to hear live. The cassette is available locally through Rubber Brother Records and also through Lolipop, but you can also listen (and purchase) it here!

Released back in June, this split cassette comes to us from our northwest neighbors. Bubba claims Eugene, OR as home while Bad Hex haunts Spokane, WA. On this digital version, Bubba’s track titled “Bubba’s”, offers a sampling of garage punk from a place where you can actually practice in a garage without succumbing to heat exhaustion. In my opinion, it adds a layer of authenticity to the flannel sound of their punk. “Hot Dog”, the second track from Bubba, has a feisty, scream-it-out, old school approach to punk that I can get behind. Bad Hex provides the emo punk behind “Crushing” and “I Hate Pop Punk”, the latter being my preferred track of the two. This has been a big year for Bad Hex with regard to split releases, having also put out music with King Mountain Petrol as well as Xtramedium (both of which can be found here). As for me, I’m sort of partial toward Bubba, and you can hear that split release with Bad Hex right here.