We at YabYum are all about cooperative artistic efforts so when I heard one of my favorite bands was teaming up with one of my favorite visual artists for a collaboration that would yield the album art for their latest release, I was nearly giddy. Well, as giddy as I get. Of course, the band I speak of is Andrew Jackson Jihad who is known for returning to their home turf here in the desert when it comes time to make a new album. Knife Man, their last studio full-length, was recorded at none other than Audioconfusion back in 2011. For Christmas Island, Andrew Jackson Jihad came back to Phoenix for the artwork that would grace not only the album cover but the extensive merchandising (including skateboard decks) that accompanied the release – their first with SideOneDummy Records.

And what Valley artist would be better suited to the wry humor and dark undertones of the music of Andrew Jackson Jihad than Suzanne Falk? Answer: NO ONE. Both AJJ and Falk possess the rare ability to freeze certain moments, to crystallize them so they might be observed from a variety of angles in spite of the separation time and distance might create.

On the cover of Christmas Island, the viewer is confronted by a lunar landscape encapsulated in the cardboard confines of a grade school style diorama. A landscape as envisioned by children complete with monsters and glitter and skies of teeth in which the depth and precision of delivery is disguised by the vibrant colors and candy-coated nostalgia. The album art clearly speaks of the artist who created it. Falk’s distinctive visual sense and iconic approach to the still life bustle out of the painting so that anyone familiar with her work will immediately recognize one of her progeny when they look upon it. A strange amalgamation of altar and dream.

The painting, however, does not stand alone. I received my pre-ordered, early-arrival digital copy of Christmas Island and began to hear the conversation between artists unfold visually and musically. Some connections could be easily drawn if you looked and listened together, the “blood-collector” collected blood and sky “full of teeth,” for example. To further my own understanding, and my personal obsessions, I decided to go to the source and discuss the creation of the artwork for Christmas Island.

Suzanne Falk works from her home studio, punctuating the central role her art plays in her everyday life. I could identify her house from the moment I saw the front door even though I’ve never been there before and have only had brief exchanges with Falk in person, but I knew. If you also know who lurks inside, coming upon her residence might be a thrilling discovery. If not, the little altars of knicknacks long abandoned throughout other childhoods might seem a bit strange. “Lurks” might also be the wrong word, one cannot sincerely lurk in such a cheerful (and well-lit) home. But if strange and unusual creatures can be said to lurk than it is aptly applied to Falk. She possesses a mystical presence, a certain otherness, that makes her seem as if she’d be perfectly happy in the eerie lunar world she imagined for Christmas Island as long as Starflash (dog and lifemate) was at her side.

Suzanne grew up surrounded by artists and she found herself in Tempe after she landed a graphic design job designing t-shirts for fraternities and sororities. After some ups and down, Falk moved toward painting as a means of escaping the difficulties surrounding her and discovered her true calling. It was some years later (but many moons ago) that she met Sean Bonnette and Ben Gallaty of AJJ before AJJ at the now-defunct Willow House in downtown Phoenix. 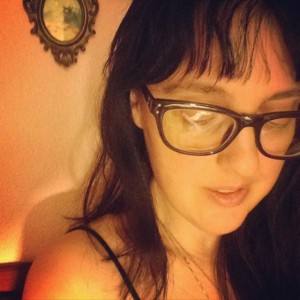 Little did she know that their meeting would eventually result in an artistic collaboration until last September when Sean contacted Suzanne by email to let her know that they would like like her to paint an original work for the cover of the forthcoming full-length set for release through SideOneDummy Records. She received an early version of the album to delve into while brainstorming and began arranging her diorama.
“The album changed for me the whole way through,” Falk recounted during our conversation. Christmas Island – like most albums to emerge from the AJJ oeuvre – is nuanced, ornately detailed, and runs an emotional gamut that oscillates from blithely optimistic to a stiff drink away from suicide. Everything from inside jokes to highly specific cultural references wind through the album like a labyrinth inviting the listeners to always think about what they’re listening to even if they don’t always understand. (Is Bad Lieutenant 2 really the greatest movie ever?)

Around Thanksgiving, Sean came to visit Suzanne and take a look at what she had underway for the album. During their conversation, Bonnette asked if he could “mess with it,” a suggestion Falk initially felt some internal resistance to, but she gave in. This was the first collaboration of this nature she had embarked upon and, unlike musicians who frequently work with others in their craft, painters are often the jealous gods of their own creations. But Suzanne permitted the exchange to continue and Sean added a few items to her still life from around her house. The tiny altars and relics that cover nearly every available space in Falk’s home provide a rich hunting ground for novelty items vibrating with personal symbolism, for each and every person. Sean added a few items including the mice and a die from a game the band plays while on the road. Then Suzanne set to work transposing her diorama into oil on canvas.

Christmas Island, the album and the artwork, both demonstrate a wavering sense of love and beauty. We see darkness and despair, but never too far from the brightness of hope. “Find a nicer way to kill it,” is a recurring sentiment throughout the album (not surprising considering not one but two songs are named for Temple Grandin, an advocate for animal rights and autistic activist who supports humane 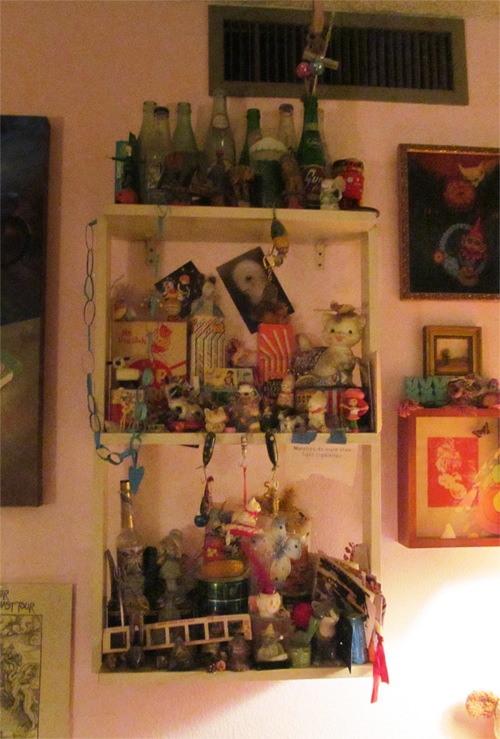 treatment of animals in the meat industry).  A more pleasant way to die might be considered a morbid fixation but there is something somber about the acceptance of it all. Maybe even comforting. Both album and artwork, dare us to laugh at our deepest fears.
Of course, with anything, if you stare too long you might begin to imagine things that are not there. The girl entangled in to the lower right of the painting, for me, called to mind Temple Grandin’s squeezebox referenced in the song “Temple Grandin Too” in the line “A hug without a human is alright.” Falk maintained that the figure was added to convey a sense of friendship and was her own addition.

“[Andrew Jackson Jihad] stayed close to their roots,” Suzanne asserts. The band frequently returns to Phoenix for shows or to work on projects, recording or otherwise, but they go a step beyond all that. They have managed to remain present in the continuing dialogue that is the Phoenix art scene. They have remained aware and involved despite their successes beyond our dusty desert.

When an album begins with “Open up your murder eyes and see the ugly world that spat you out,” but, you know, with a beat you can dance to joyously, you’re in for the distinctive cocktail that few can properly concoct: one part hope, two parts melancholy, and enough humor to make it sweet going down. Suzanne Falk knows the recipe as do those behind Andrew Jackson Jihad and you find its matched expression in Christmas Island – the painting and the recording.
Get your hands on a copy of the album on vinyl while it lasts from SideOneDummy here. You can steam the album (and purchase digitially) here. Perhaps even more exciting than all of that is the fact that Andrew Jackson Jihad is on tour right now, this very minute, and they’ll be closing down their summer run in Phoenix this week on August 1st at the Crescent Ballroom. And that very next day, Suzanne Falk will be joining John Tuomisto-Bell for a Two-Person / Two-Day Show on August 2 & 3, also in Phoenix. For more information about the art show, please head here.
~ 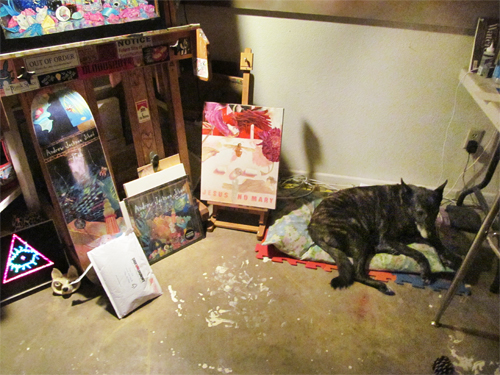 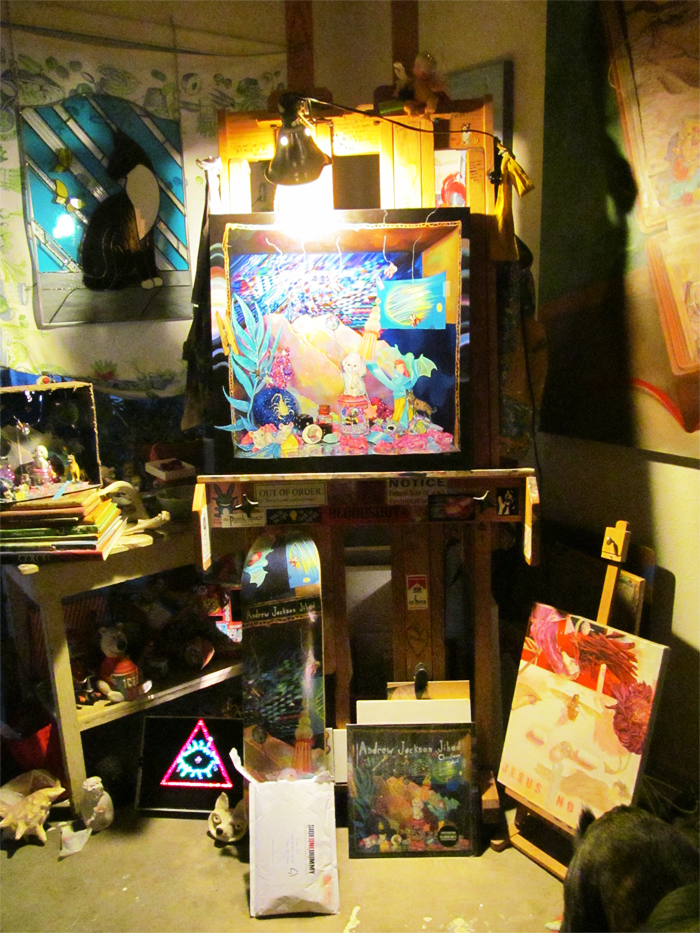