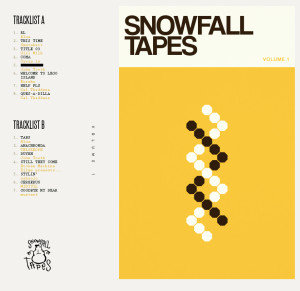 Snowfall Tapes, the first volume compilation from Snowfall Tapes in Flagstaff features artists from West Virginia, Sweden, Canada and Belgium and is a veritable World Cup of electronica and experimental music.

When it comes to music from different parts of the world and hailing from the same genre, sometimes the vibe is vastly different. For instance, Swedish Metal is remarkably different than American mostly due to the fact that Swedish metal heads were influenced by punk rock, whereas their metal brethren here in the States were channeling blues and psychedelic rock.

But when it comes to chill/experimental/electronica, there’s a common thread: technology. More specifically the brilliant use of it. But make no mistake, these aren’t simply a “let’s pick out some noises and record them” tracks. There’s some very good musicianship to be had here. And the composition on these tracks are terrific.

On Snowfall Tapes there’s enough samples, drones, and marvelous textures to satisfy even the most discerning taste. On many of the tracks I could hear the brilliance of Kraftwerk, the soothing impulses of early Radiohead, and the orchestration and penmanship of Brian Eno.

If you’re looking for an international taste to add to your collection, the entire compilation is a buck. Find it here.