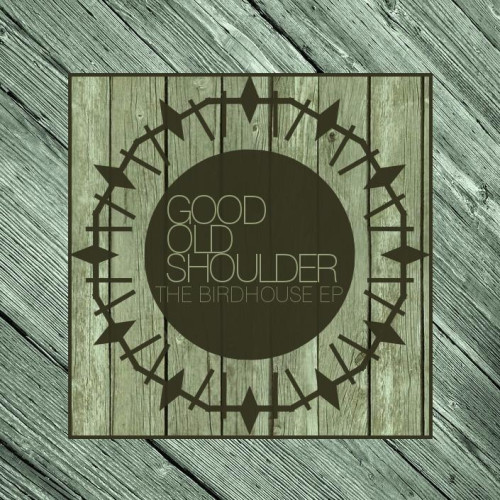 The Birdhouse EP from Albuquerque-based Good Old Shoulder sounds a lot like what you might imagine a birdhouse would sound like, if it were a five song EP. It’s lovingly, if crudely crafted from rustic materials. It’s something I could picture small birds lighting into for shelter and pecking at flax seeds before flitting away for something more interesting. Also, the album art looks like wood.

The opening track of this five song EP is actually called “Little Birdie,” and it begins, appropriately, with a recording of (presumably) little birds singing. What follows is a very typical and traditional folk ditty that begins with an old-timey filter on the vocals and lapses into a drawl when pronouncing the word “hollow” as “holler.” It wasn’t until the second verse that I realized this song might not literally be about an actual bird.

“Smaller Things,” to quote its own lyrics, sounds like it could be “rearranged by steadier hands.” The melody and lyrics are unsure of themselves. They finally find their focus when the chorus rolls around. Unfortunately they’re wrapped around the four oldest chords in history.

On “Down By the Salley Gardens” the EP starts to get its footing thanks to a lush, lo-fi electric guitar tone that explores the scale and underpins the melody nicely. Lyrically it suffers from a Yoda-esque, awkwardly-striving dedication to its rhyming meter.

It’s not until the best song on the EP, “Trips,” that I began to see the potential in the band’s songwriting. The production brings some depth to the record that’s missing on this overly mid-rangey EP. The chorus plays to vocalist Jonathan Mouchet’s strengths as he lets his voice do the heavy lifting. He sounds more confident in his melody than he does on some of the other tracks. The open-hearted sincerity that runs through the EP wears this song well, whereas it’s at odds with the determined folksiness of the rest of the album. The album should end here.

Sadly, we’re treated to a painfully unfunny ode to bacon in the form of a banjo hoedown, complete with a fake hillbilly affect. It’s called (and I sigh) “The Name of This Song Is So Long You’d Think We Were in a Pop Punk Band But We’re Not.” To the credit of this song, it ditches its strict rhyme scheme at one point to use the words “sumptuous eggs.” That’s clever compared to the opening line: “There once was a boy in the land of Nantucket/Who had a nice frame, and of money had buckets/One day he met Sally, sweet as could be/And they settled down and stuff.” I have no beef with funny songs, but humor is harder than it looks. A little wit goes a long way. This song is not worth the time it took to record, which probably wasn’t much. I bet it’s popular live.

The title of the last song actually counterpoints the main problem with The Birdhouse EP: it might as well be titled “The Name of This Album Is So Precious and Folksy You’d Think We Were in a Precious, Folksy Band And We Are.” It gives exactly what you would expect at almost every given moment. At a few points it manages to fulfill those expectations in a pleasing way, but then I’m let down again, wondering what this birdhouse would look like in the hands of a seasoned pro.

I don’t recommend this EP, but I am curious to see which way the band develops. The more effort this trio spends on fashioning their front-porch aesthetic, the poorer they’ll be. Hopefully their next record will build itself around strong, singable melodies, solid production and audacious moments. Also, you’re not fooling anyone with your slang, boys: we know you’re not from 1920’s Appalachia.

The Birdhouse EP is available on Bandcamp. Good Old Shoulder is offering a “pay-what-you-want” deal on the EP. You can find out more about the band, including show dates on their Facebook page.