Since exploding onto Phoenix Valley stages and just about everywhere else in Arizona including Prescott, Flagstaff, Tucson, Bisbee, and quite possible a quarry in Nowhere, Arizona (still trying to confirm), Fairy Bones has left its mark on local music.

Their EP, The Fairy Bones EP, is a synthy-punkfest that has more hooks than a fishing village in Alaska and has been endlessly spinning on local radio and iPods since its release in January of 2013. To rave reviews, might I add.

Fairy Bones is led by the fiery and can’t-take-your-eyes-off-her-performance front woman, Chelsey Louise, who is a singer with a voice that can woo you and punch you in the mouth equally well.

But make no mistake, guitarist/bassist, Robert Ciuca, bassist/keyboardist, Ben Foos and drummer Matt Foos, together with Louise, have crafted an album that is powerful, original and dare I say, fucking catchy as all get out. In between playing and touring, the quartet has remarkably found time to write a new record, Dramabot, and plans to release it in January 2015. I had questions. They had answers.

Frank Ippolito: Dispensing with the same ol’ same ol’, and we’ll get to Robert’s ab routine directly, but was there a moment when you decided, “yeah, let’s do this shit…”

Robert: Matt & Ben threw a party for the “end of the world” on December 21, 2012. Chelsey and I sat with Matt at that party and totally had that moment.

Ben: For me, it was the first time we heard our EP at Flying Blanket, and from that moment on I knew that this was it, this is what I wanted to with my life.

Chelsea: The first time I heard “Filler, Baby” recorded was basically a religious experience. I agree.

Matt: Our first show after finishing the first song. The audience lost their shit, and I knew we’d be okay.

Tell me a little about your fundraising efforts for the new album. Will there be fabulous giveaways for donors?

C: YES! Go to dramabot.org to help us raise funds for our first album! We’re trying to raise a bit of money to help complete the album, and we’ve thought up some unique prizes we think you guys will be interested in. Any amount truly helps us, even sharing the page with your friends and/or talking about it obsessively on the street to strangers.

Describe for the audience playing at home, the Fairy Bones’ “lair”.

C: I’d describe it more like a mental-orgy-torture-dungeon. Lair works, though.

R: Red walls, wood floors, tiny dogs that want to lick you incessantly, conjoined bedrooms, Matt’s graffiti in the backyard, and a skeleton in the corner.

B: I’d describe it as an unconventional home.

Any, “I really didn’t need to see/know/hear that” moments?

C: They’re pretty great roommates. Last week we screamed at each other and then group hugged and cried. We’re just VERY EMOTIONAL OK?!

R: I’m in love with these people at this point, so there’s nothing that’s like “whoa what’s that??” We’re all weirdos and you never know what you’re gonna walk into when you get to our house and I love it.

B: Since my brother is one of my roommates, I’ve already seen a lot of him. But nothing at our house has truly shocked me.

M: We all love each other, and half the band is family. So it’s all comes with the territory.

What are the advantages/disadvantages of having a “band” house?

C: Personal space is sometimes an issue. Our house has no doorknobs. Advantages include learning to take care of each other, picking up where another one might slack, which is great for touring. Being in a band has a lot to do with the individuals, as well as the music.

B: It’s awesome let we can practice at anytime when we are home. But all of us sharing one bathroom can get a little chaotic.

Since emerging on the local scene you’ve played on just about every stage in the Valley, still fun?

C: All the venues differ and I think that’s pretty neat. Last Exit Live has amazing sound, Crescent has a great stage, Rogue has my heart, Parliament has its crowd, Long Wong’s had personality. They’ve all got something unique to offer to musicians.

B: It’s fun being able to switch up the way we usually arrange everything, depending how big the stage is.

M: Any opportunity to play is a blessing. Being able to turn it up and dance. How can that ever get old?

Ben leaves to get a burrito. Yeh, he did that.

Your EP, The Fairy Bones EP, is beyond fantastic, how long was it in the incubation stage? Where did you record it?

C: Thank you! Honestly, not very long. They were the first songs we came up with as a group we thought were good enough. We were gonna shop around studios, then we met Bob Hoag at Flying Blanket and we were like, “Yeah we already know this is it.” And went for it. Nicole from The Love Me Nots had a lot of influence with “Like Like.” We weren’t even going to record it actually.

R: We basically went in to Flying Blanket with four of the songs we had been playing since the beginning that we thought would all work as singles, with enough variety between the four of them.

M: Those songs came together rather quickly in Fairy Bones. Nothing was more than a few months old, as they were. That being said, some of the music started as early as five years before. It was all just waiting for the right moment. 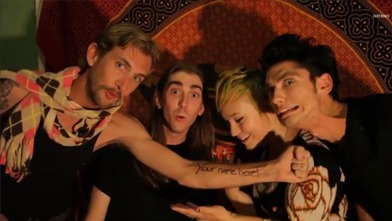 I’ve been outspoken about bands here in Phoenix not getting out there and taking their music to people outside the city, but there’s something different, good different, about you, what is that?

M: Because we try? We try to play outside of the city? This feels like a trick question.

Any, “I really didn’t need to see/know/hear” tour moments?

R: Some used needles in the alleyways of Hollywood when we were unloading gear.

C: I have no idea what they’re talking about. I guess I’m not in alleyways, I guess I’m DOING MY JOB.

So, you’re playing a bar in <enter city here> are they like, “who the heck is this band?” or “Whoa, didn’t know bands like that were in Phoenix”.

R: I’d say more like, “Who the heck is this band?” I think the fact that four people are setting up way more instruments than they need is confusing right off the bat.

C: The sound guy goes, “Okay can you check the mic?” and I’m all “BELLLLLLLLLLTING” and they’re like, “Oh shit okay wait let me just.. uh..”

C: We usually get a lot of, “I don’t really know how to describe that… Have you heard of No Doubt?” I get the No Doubt thing constantly.

OK, new music. Where are you at in the process?

C: We’re actually in the process of becoming an Oasis cover band.

R: There’s new stuff happening every day whether it’s Chelsey laying on the couch singing some random melody and she demands I come up with a guitar part or spontaneous riffs that become a full band song within an hour. We keep it loosey goosey.

C: I don’t expect a lot Robert. Just for you to read my fucking mind, not that hard, god…

M: The grueling part of gathering resources. Of clawing everyday to get where you want to go. Waking up every morning, not giving a solid fuck if the worlds going to end, and KNOWING you’re creating the world you want.

C: Dramabot is a lifestyle, it isn’t an album. C’mon now.

Any drastic changes in sound and style?

R: Depends on how serious we are on the word drastic…

R: More mixing guitar and synth in one song because Chelsey started wailing on that shit. Can I say “shit”? It’s been great because I can take a little break and dance on the song instead of being part of the driving force of the song.

M: I hope every day that we’re getting at least a little sexier and slankier. But we’re all horrible nerds. 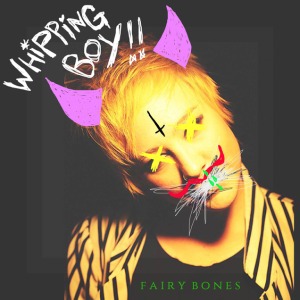 Your releasing a single on YabYum along with this interrogation, tell me about it…

C: Ah, yes, “Whipping Boy” is an entire song about how I totally suck.

M: Whipping boy!!! I love playing this song. It’s so pirate-y. It’s honky in a great way. And it’s a waltz, our only waltz. So it’s a nice change of pace.

C: I GOT YOUUU BABEEE!

Any plans to do a big shindig CD release party?

M: If I could have my way, there’d be elephants, fireworks, UFO’s, free funnel cake and cherry pie for everyone… I’m sad that I can imagine that. I’m tortured by my dreams.

R: Freakshow of the year.

C: To answer your question truthfully: Yes. 2015. Plan your year around it, obviously.

R: Copious amounts of coughing…followed by even more laughter.

C: I just cry in the corner.

Listen to the new singles from Fairy Bones here!