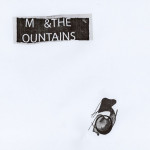 My bandcrush on Mickey & the Mountains started back with Creepy Martini, their 8-track debut from May of 2013. The latest single from the group, “Fatigue”, was released just last month. Mickey & the Mountains continue to push the experimental aspects of their sound: the dissonance and drone and discordant. They continue along the path of deconstructing the traditional rock song into something with a little more sway and a little less sense, but still totally listenable. I’m definitely digging the new track and wonder what shape future recordings will take on. I hope they keep a safe distance from going totally amorphous. The tentative hold to familiar structures is part of what I enjoy so much about their sound. Listen to “Fatigue” here. 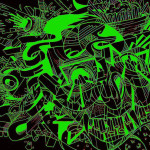 The psychedelic garage punk outfit known as Sunbeams are relative newcomers on the Phoenix music scene, but already they’re creating quite an anticipatory buzz for their soon-to-be-released EP, Verses. “Ok, Explode” is the first single from Verses and, if it’s any indication of what’s to come, I’m expecting a stellar summer album from Sunbeams. The band combines throwback pop (that’s all the rage with the kids these days) with some feisty garage fuzz. The sound is well-suited to the home-recording Sunbeams opted for when recording their EP. Verses should be expected around August/Setember. Maybe we can hope for another early single beforehand? We’ll just have to wait and see. In the meantime, you can enjoy “Ok, Explode” here. 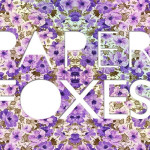 Just released, “Marz Attacks” by the Paper Foxes offers a preview of what’s to come from their upcoming album, The North American Shuffle. Driving, dynamic guitar work brings to mind bands like The Mars Volta while the track has some decidedly pop appeal. I like the added flair of the Brian Malko-style sound of Paper Foxes’ lead vocalist. “Marz Attacks” is a song meant to be played loud. You can check out “Marz Attacks” here and make sure you peruse some other early selections from Paper Foxes while you’re there. Get on the bandwagon before you can even get your hands on the album. It’s cooler that way. 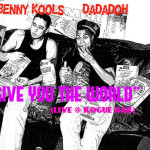 “Give You the (fucking) World”

DaDadoh is a man of many names and even more songs. Infusing hiphop and a rocknroll guitar, Dadadoh lays out a killer track that we couldn’t possibly play on the radio but you can listen to it as loud as you like at home. The track was recorded live at the Rogue Bar on July 5th and word has it that the entire show might find its way to a new album. Of course, DaDadoh is one of those folks you want to see perform live, but a live album might be the next best thing. While you’re waiting, you can enjoy “Give You the (fucking) World” here. 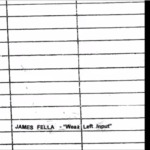 Is this a single? Is this not a single? More importantly, do we really care? In actuality this “track” is Side A to the LP by James Fella about to be re-released on Gilgongo Records. Atypically rhythmical, with the most literal approach to drone we’ve encountered in sometime, the song moves, it transforms, amassing shape and disintegrating. It breathes. And, as you listen, you find yourself drifting through consciousness-expanding space, devoid of time. Comprised of “overlapping electronics, guitar, and tape noise” and creating a minimalist, meditative soundscape that will carry you through to the end, “Weak Left Input” will hold (or suspend) you from beginning to end. You know, if you’re into that sort of thing. Listen here. The re-release happens in September so you can join me in the wait for “Weak Left Input” on vinyl.