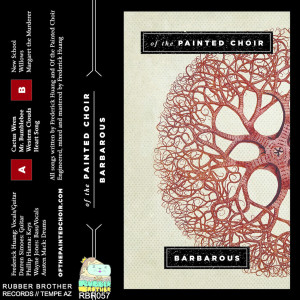 Of the Painted Choir

The seven track release from Of the Painted Choir left fans with quite a swan song in the wake of the band’s amicable demise (frontman Fred Huang is moving back to Tucson). The album opens with “Cactus Wren” and immediately sets an uplifting but dreamy tone for the album. Barbarous then moves into “Bumblebee”, a personal favorite of mine that I was thrilled to see set down in an official release. “Western Clouds” starts off with a vintage rocknroll drum beat that will have you on your feet and dancing until the moving pop ballad “Heart Song” slows you to a steady sway.

“New School” has some parent anxiety I haven’t experienced since my college days. That seems terribly appropriate given the song’s subject matter: returning to school at the wishes of another. “Willows” infuses a gospel-style choir into the harmonious sound that defines the band to create a folk-tinged OTPC classic. Barbarous closes with “Margaret the Murderer”, a dynamically shifting number that changes shape as you listen. Stream/purchase here. 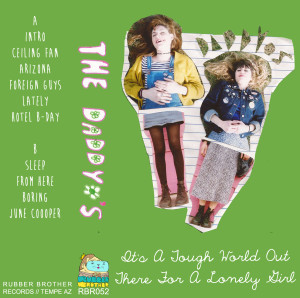 It’s a Tough World Out There for a Lonely Girl

One of the many things I love about Rubber Brother Records is that they are continually exposing me to new artists. Tulsa act – The Daddyo’s – is just one such discovery I made shuffling through new cassette releases from the Tempe label. I found myself instantly enamored with It’s a Tough World Out There for a Lonely Girl. After a short intro, the album moves into “Ceiling Fan” which is a bit of a Bell Jar moment, but there is a sweetness in the way the sorrow is conveyed that is both beautiful and moving. I think one of the things I find myself most enchanted with on this new release from The Daddyo’s is its sweetness, that light thread that runs through the darker fabric of their music.

“Arizona” is one of the more lighthearted songs from the Daddyo’s but even it carries the nostalgic hues. “Sleep” shows The Daddyo’s are not without their angsty side which finds expression through the distortion heavy, garage sound heard on the track. The combined vocal power of Kylie S. and Kylie H. has a Brit Pop feel to the post-grunge sound. There is a touch of that 90s alterna-rocker vibe a la PJ Harvey added to their own shoegaze style for a sound I can definitely get behind. Listen to It’s a Tough World Out There for a Lonely Girl here and buy your own copy to get hidden track, “Tree to Space”. Trust us, you want this track. 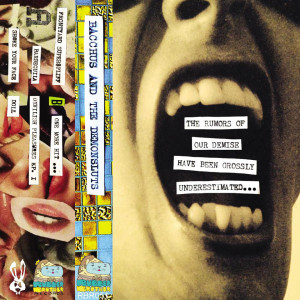 The Rumors of Our Demise Have Been Grossly Underestimated…

If you haven’t yet hopped on the funky bandwagon of Demonslut fandom, I suggest you get with it while the going is still good. This is a band that has to be experienced live, but this recording might be the next best thing. The Rumors of Our Demise Have Been Grossly Underestimated… was released back in May from 56th Street Records, another local music powerhouse, both digitally and on CD. Rubber Brother Records has the cassette version for all you collectors out there, myself included.

The album opens with “FrontYard Super$pliff” and the raw energy fueled through jazzy instrumentation will have you hooked. Honest. As the album continues, I find myself wanting to shout things that would never leave my mouth. “Get down with your bad self,” for example. I barely made it through “Barbequila” without embarrassing myself. Things slow down on “Sh@ke Your Face” to a slinky pace, but before the track even concludes, the feisty energy returns. Bacchus and the Demonsluts is a saxophone-driven powerhouse, but only an ensemble of truly talented players could pull off the ruckus debauchery of these instrumentals, compelling as any lyric’d track out there. Get a hold of the chaos (and the cassette) here.