Nerdzerker makes music for the gamer raging in your soul. The punkrock three-piece is signed to Phoenix’s 56th Street Records, home of others acts known for combining the quirky with the feisty like Andy Warpigs, HotRock SupaJoint, and Bacchus & the Demon Sluts. The album opens with “Nothing” and the listener is confronted with a vintage punk sound a la Dead Kennedys and Bad Brains, but as Rage Quit ventures onward, it’s clear the themes are less political and more, well, nerdy. Take, for example, the album’s second track “Jrpg” which dares to ask “When was the last time I saved my game?” or “BIC (Blowing into Cartridges)” which calls to mind a nostalgic moment we can all relate to. “Jurassic Fart” is my favorite track from the album and left me asking for days, why does God hate dinosaurs? Make sure you get with the goodness of Nerdzerker’s Rage Quit. The album can be purchased here or you can stream Rage Quit through Spotify here.

The Savage Wasteland Music Collective is the brainchild of members of Ramshackle Glory but is home to Pat “The Bunny”, Fridge Scum, and other fixtures of the Tucson punk scene. In May the Collective dropped a six-track, split release from Cottontail and Moon Bandits. The first three tracks come from from the folk-punk duo known as Cottontail, including one cover of a Moon Bandits’ song, “Community Love Song”. The B-side features Moon Bandits, a band i hadn’t heard before the split release, but immediately felt enamored by their lo-fi, banjo-fueled, pop punk. And, of course, Moon Bandits tackle the Cottontail song “Put a Name to It” to end the split release for a real sense of sharing through mutual covers. Available digitally and on 7″ vinyl. You’re choice. Listen/purchase here. 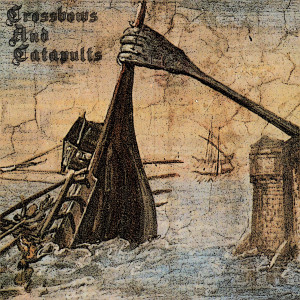 This three-piece punk pop outfit from Seattle know how to hash out a lively sound on their self-titled EP released earlier this year. Opening with “When You Look Up”, I was immediately reminded of another band known for redistricting the boundaries between pop and punk rock that used to make the Phoenix music circuit, Haggis. I have to admit that I enjoyed the music a bit more before I started delving the lyrics available through their Bandcamp page. If you’re not Mark E. Smith or even Greg Graffin, consider keeping an air of mystery to your lyrical content, punk bands. Sometimes, it works out better for the listener if they have to really spend sometime with the music before discerning exactly what you’re singing about. Just a suggestion. Listen to the Crossbows and Catapults EP here.