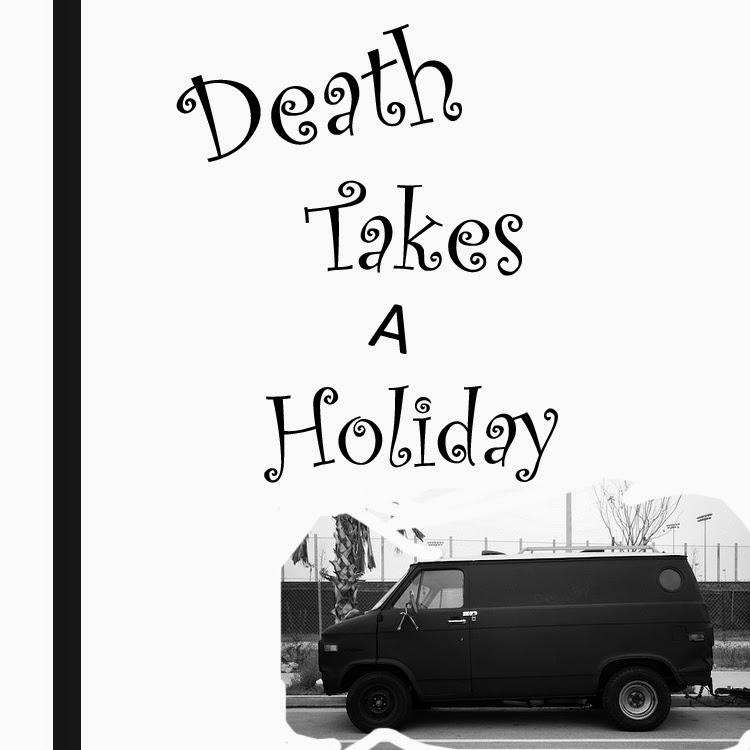 When we introduced Throwback Thursday to the blog, we were really excited to find out what sort of rad albums might come our way that, while not necessarily “current” in the media’s use of the term, manage to hold their relevance throughout the test of time. Death Takes A Holiday is just the sort of gem we had in mind.

Formed in the early nineties, DTAH took a short break and returned around ’97 to get down on the music-making. Pete Hinz (of JJCnV fame and lead bassist for Death Takes a Holiday back in the day) put up a collection of tracks [listen here] from the now defunct band and it was love at first listen.

Turns out Death Takes A Holiday was HUGE. Okay, maybe not Eagles huge, but definitely a name in the underground/alternative scene here in the Valley. They won a New Times Award and opened for some pretty stellar bands. I told Pete I would have to do a Throwback Thursday article on DTAH and he hooked me up with Andy Held and Richie Van Syckel, guitarist and second bassist respectively. The band also included a changing line up of drummers (Sam Horowitz, Dennis Hickerson, and Ray Weaver).

Through the awesome power of the Internet I was able to ask the guys a few questions about Death Takes A Holiday and they were kind enough to give me responses. 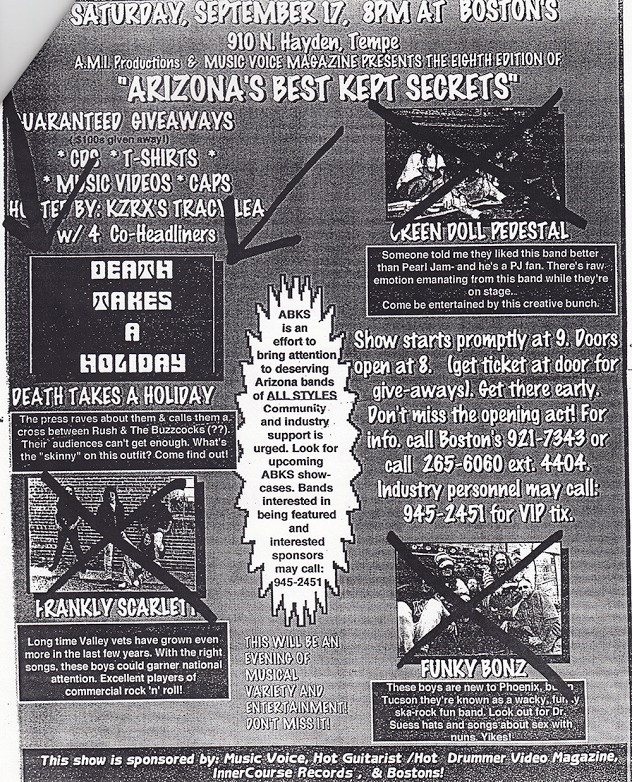 YabYum:  How did DTAH form and start playing together?

Pete Hinz: I was playing in a band called the Customers (late 80s-early 90s) with Andy, the guitarist. Then we got a new drummer and went with a new name. When christening the band “Death Takes A Holiday” I had no clue it was a movie from the 30s. I was driving a van I had painted completely black and mentioned how I should write “death takes a holiday” on the side. Then we split for a couple of years and got back together with Rich as second bassist in 97.

Richie Van Syckel: I joined the band the second time around. I was a huge fan of DTAH, I would go see them a lot and me Pete and Andy were hanging out going to shows and stuff. When they were thinking of reforming I totally wanted to be in the band. So I asked Pete if I could play bass and Pete would play 2nd guitar but Pete wanted to play bass and so we decided to do a 2 bass band. It totally worked.

Andy Held: Originally Pete started The Customers and I joined after their first guitarist left. We played out quite a bit and did some recording, then our drummer decided to call it quits, and along with a new drummer we decided to rename the band. Pete one night wanted to paint “Death Takes a Holiday” on the side of our ugly black band van, and I said that’s what we should rename the band, so there you have the beginning.   We split up around 1996ish when our drummer went into rehab for some substance abuse. In 97 Pete put an ad in the New Times classified musicians wanted section and the only people who responded to his ad were me and Sam Horiwitz, our drummer fresh out of rehab! We then announced this news of playing again to our #1 fan and good friend Richie VanSyckle, and his first response was “I’m playing with you guys this time!”, so two bass players it was.

What other projects were you in after DTAH? Are you in a band now?

Pete: Before DTAH was the Customers. After was the Shaving Party and now JJCNV.

Richie: After DTAH I played guitar in Vin-Fiz. Then bass in Seven Storey Mountain for a few years. Also played in numerous noise rock project bands that never played out. I’m am currently in a band with Andy called Hi Fi Lo. We started the band a few months ago and will be playing are first show in June.

Andy: We did a short stint as The Shaving Party with Pete, myself and Richie and a drum machine with Pete playing some keyboards as well. We played one show, and then Pete continued with it for a while until he started Janis Joplin Crap and Vomit, JJCNV of course. Richie had, and I had, a few failed attempts at getting something going, but it never really got off the ground. In the fall of 2013 Pete asked Richie if we were still looking for a drummer, and as a bonus he has a practice place. Of course we jumped at the chance [to play] with Eric Guthrie formerly of Pinky Tuscaderos White Knuckle Ass Fuck and Wirefeeder, etc. We hit it off immediately personality wise and musically, and we knew we had the right guy, but we needed some vocals to really get going  Then guess who… Pete, asks if were looking for a singer/second guitarist.  He mentions Orin Portnoy from Odds and Sods, so we set up a rehearsal with him in January of ’14 and like the missing puzzle piece we started writing like crazy and we now call ourselves Hi Fi Lo. Our first show is June 7th at the Icehouse Tavern with Pete’s band JJCNV who put the puzzle together. 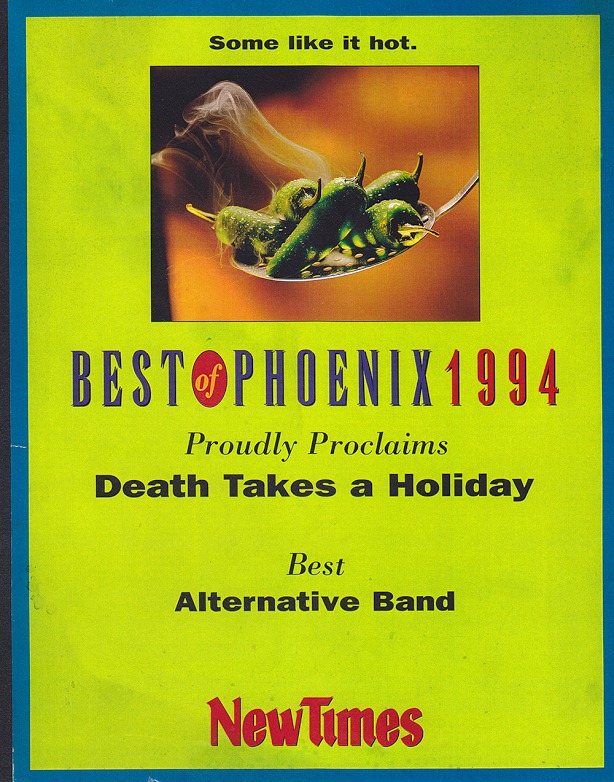 What was it like playing the Valley music scene back in the late 90’s, year 2000? How would you say it’s changed, is it better, worse, uncomparable?

Pete: Pretty much the same. Still plenty of places to play for a band. Shit tons of bands. Just different venues and locations. The crap part is what Tempe did to the Mill Ave district. They turned it into a chain mall.

Richie: Playing shows in the 90s was pretty good for us. We played often and would always try to have our friends’ bands play with us. Also DTAH was getting a lot of press from zines to New Times. I would say the main difference of the scene back then was that most of the cool venues were in Tempe and Mesa area. Now all the good venues are in Phoenix.

Andy: I considered Death Takes a Holiday a unique art/punk band, and back in the early mid ninety’s we never fit in with any bands that well in town to actually create a scene, so we got to play with a lot of Rock/Grunge bands. And I think our stuff really kinda went over the crowds heads, but we did develop a few loyal followers, mainly friends of course. But in ’94 the Phoenix New Times hired a new Music Writer, Peter Gilstrap, and we were lucky enough for him to catch us on one of our “good” shows and that year he voted us “Best Alternative Band” in the 1994 Best of Phoenix issue of the New Times, which I thought was pretty cool. Towards the end of the 90s when the Modified Arts opened up, the independent music scene started picking up and with the addition of all the new Art Galleries who hosted bands, things were looking good.

More specifically, what was it like to a in an unclassifiable rockin punk band back then when so much stuff around here wasn’t? It just seems to me that music like DTAH would be easier received these days but perhaps I’m wrong.

Pete: We got contacted by Island Records and World Domination Recordings for submissions. Nothing ever came about with those but its not like loud punk music didn’t have enough fans that the bigger labels were looking at even someone as small as we were. Back then we played shows with noise, pop, garage, weirdo, rock and punk bands. Just like now. We crossed a lot of genre lines cause we were influenced by and vomiting out many different artists.

Richie: Not sure if it would be different now. I think our crazy drunk loud funny shows might get a slightly different response from people.

Andy: I think you’re right about DTAH being much better perceived these days, there are still boundaries for all genres but I think there is a whole separate genre for bands that go beyond those boundaries.

Is there one proud/funny/shitty event or memory that sticks out more than others about DTAH that you would like to share? Like something that happened at a show or even when you guys were all together practicing/hanging out?

Pete: We played the grand opening of the original Nile Theater. Played with and spent the night hanging out with Steel Pole Bathtub. The stage lights at the Lucky Dragon set the stage on fire.

Richie: One of my favorite shows was we got asked to play a Valentine’s day show, but we wanted to do something different. So we decided to do all covers that had to do with love, sex and stuff. Gun Club’s “Sex Beat”, Cheap Trick’s “He’s a Whore”, Buzzcock’s “Ever Falling in Love” or Big Black’s “Bad Penny”, songs like that.

Andy: Well besides winning Best of Phoenix, my proudest memory was when I got a voice mail for an A&R Rep from Island Records that heard about us and was interested in possibly signing Death Takes a Holiday. So we put together our best attempt at a promo pack and sent it to her…..never to be heard from again. But I did save that voice mail forever and played it for people all the time.

Any plans for a reunion?

Pete: Already did one a couple years back.

Richie: If people totally wanted us to play a reunion I would do it. But I don’t think anybody cares.
We did do a reunion about 4 years ago, it was fun but we all have our current bands and would like to focus on that.

Andy: Well we did do a reunion gig in October of 2010 with Claire Griese playing drums. And who knows,  I would always be willing to do it again, I love playing those songs.

_
To listen to Death Takes A Holiday, click here. Thanks to Pete and Richie for scans. The band would like to dedicate this article to Sam Horiwitz.