Since its birth in 1991, The Rhythm Room in downtown Phoenix has been a popular club playing host to a wide variety of blues and other musical groups. In the capable hands of passionate people like general manager Mona Watkins, who has been on staff for the last 17 years, The Rhythm Room has become known for showing respect to everyone, from nationally renowned acts to local artists across the Valley, as well as the faithful fans and patrons who fill the crowds.

But now, Watkins has passed the torch, ready to move on to a different job. Before she left, however, the music community of Phoenix, and many of The Rhythm Room’s popular repeat performers, gave her a tribute concert event to remember.

Watkins said it was very humbling to have a farewell concert thrown in her honor – and to have so many acts play the event pro bono, just for her.

“When they started talking about me leaving the Rhythm Room, I got messages from bands, managers, everyone,” she said. “They were sorry to see me go. It hasn’t made it easy, but it was very, very humbling. I always did my best – it means a lot to be appreciated.”

Watkins said the most rewarding part of her tenure with the venue was the friends she has made over the years.

“The bands, the tour managers, even the merchandise managers – it’s such an awesome feeling,” she said. “When Coco Montoya comes back to the Rhythm Room, and the first thing he does when he walks in is look at me and say, ‘Oh, Mona, it’s so good to see you again,’ and give me a big hug… It’s such a good feeling.”

This speaks to the relationship she tries so hard to build with the performers and patrons she comes across. She called the Rhythm Room an important part of Phoenix culture, and a unique, important stepping stone for local bands.

“The things I did at the Rhythm Room… I helped cultivate relationships with bands and with promoters – a live music experience,” Watkins said. “The Rhythm Room is a music venue first, a bar second. There’s a lot of ways I managed the club to bring it to where it is now.”

The biggest thing she wants to leave as a legacy when she departs is hospitality, she said.

“My employees know this,” Watkins said. “For bands, the Rhythm Room is home. For customers, they feel like a part of the family. They need to feel taken care of, like you would a family member.”

Watkins said she felt she took the venue as far as she could, and it was time for a different aspect of management, so the Rhythm Room can continue to grow. She is taking this opportunity to try something new – heading over to lend her skills to Perk Eatery, a local restaurant owned by a friend.

But the relationships she made during her time at the Rhythm Room will stay with her forever.

“I talk a lot about relationships between me and the musicians,” Watkins said. “But those fans, who follow an artist their whole lives, and they finally get to meet their hero… The Rhythm Room can provide that, the people light up. To be able to bring that together for people… it’s pretty incredible.”

Bob Corritore, the owner of the Rhythm Room, said Watkins has been a precious part of the venue; a greeting face to countless bands and patrons over the years.

“She poured her heart and soul into this club,” Corritore said. “We hate that she’s leaving, but I think it’s best for her… She could probably never fully sleep without Rhythm Room things that needed to be done on her mind. But Mona will always be a part of the Rhythm Room. She’s loved, and her contributions are many – and they will remain.”

Corritore said the club is standing strong in her absence, and a number of people are taking parts of what she did and making it part of their responsibility.

“We are finding our way, post-Mona,” he said. “We feel good about our future, and we wish the best for Mona and thank her for her great contributions to the Rhythm Room.”

The concert in her honor, held April 20 at the Rhythm Room, packed the house with performers and patrons alike who wanted to thank Watkins for all she has done.

“It was really nice to get the call, to be picked to be included in her tribute,” said John Chavez, lead guitarist and vocalist for JC & the Juke Rockers, a popular Phoenix blues group. “Mona’s a great gal. My hat goes off to her. She deals with so many great national artists, and still shows respect for local schmoes like me.”

Chavez and his crew have been performing at The Rhythm Room for around 10 years. They began by entering in a local blues competition, and played more often as time went on, growing in popularity. Chavez worked up to holding his own blues showcases on weekends, giving up-and-coming blues performers another way to work their way up the music scene, and into the spotlight.

Chavez said Watkins always went above and beyond to help anyone she could. From giving a bottle of water to a stranger on a hot day, to showing up in the afternoon hours before the night’s show to help a group set up, she was very invested in random acts of kindness.

Chavez said he wishes Watkins the best of luck in her new endeavors – her new job is lucky to have her.

“Thanks for all the support for local musicians over the years – making us feel like stars,” he said. “You’ve seen a lot of national acts, but you still make us local cats feel welcome. There’s a saying in the business: you’ve got to leave town to get treated nice. But not here; not with Mona.” 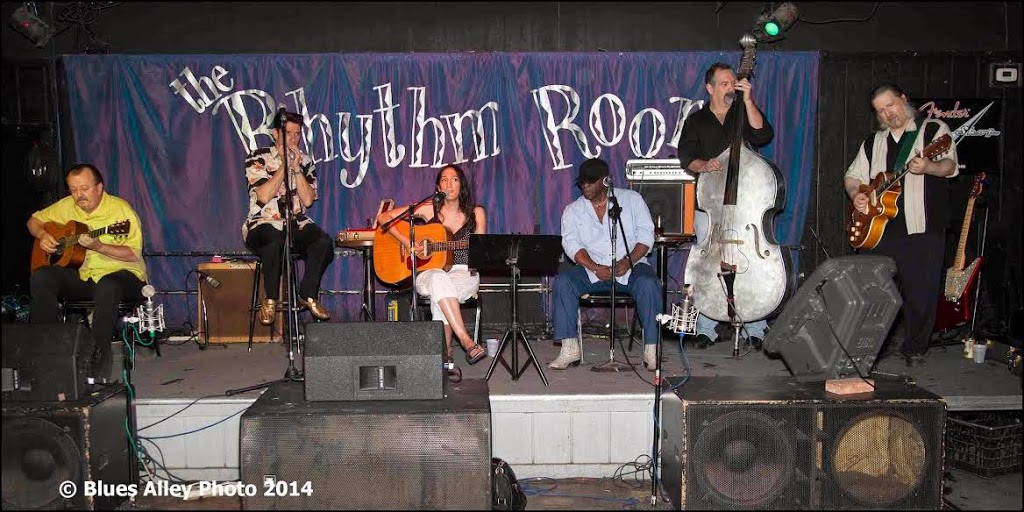