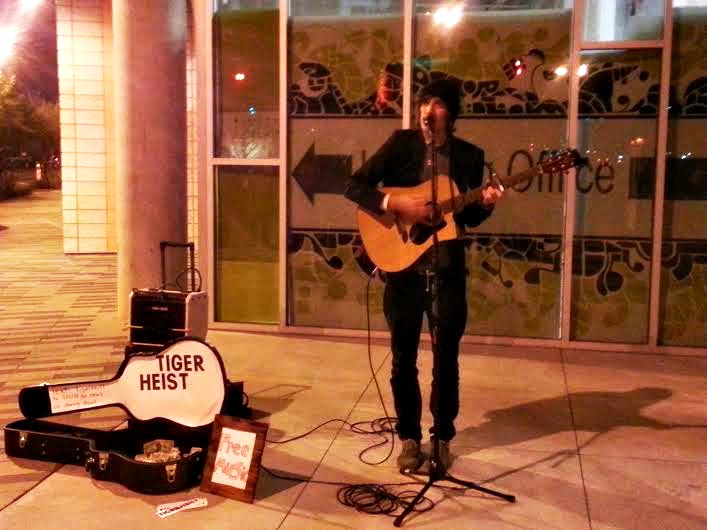 Jon Renner of Tiger Heist tries to play his guitar live every day. He practices, plans out his set list, dresses up, and heads out to play and spread the word about his performances. But the difference between Renner and many other acts is he plays wherever he wants, whenever he wants.

Renner is a member of the Phoenix “busking” community, a term for street performers. He brings his guitar out onto a street corner or near a busy concert or sports venue, and performs for passersby with an open guitar case for welcome tips.

“A lot of what I do is street performing,” Renner said. “When there is a show at US Airways Center or Comerica, I go camp out and play. Fifty people have their eyes on me, and I’m a little nervous, but as soon as I start playing, it’s all great.”

Renner has been playing since September 2013, and January was his first solo gig. He plays as much as he can, sometimes more than one place or gig each day.

“I played 60 times in the summer – sometimes two or three a day,” he said. “It really helped. Performing is only one part; the networking is great too. I try to meet and talk to people whenever I play.”

Renner pointed out now that music is his full-time job, a lot more goes into the craft once the food on your table depend on how well you can perform.

“You have to warm up and prepare for every time you go out and play,” he said. “When you play and sing as well, it’s a different muscle group. I can’t just bail on the gig… it’s my life. Also, when you get sick, it affects a lot – you have to cancel gigs, take time to recuperate. I also make an effort to dress up when I head out to play – to set myself apart.”

Renner explained looking the part truly makes a difference. The first time he went out to perform on the street, he dressed casually for the heat, wearing jeans and a T-shirt… and didn’t make much in tips.
“Later on, I went with a Johnny Cash look,” he said. “I put on a black button-down shirt, nice looking shoes – and I did a lot better. If you dress with confidence, the crowd picks up on that.”

There are a lot of things he learned from experience from street performing. There is a proper etiquette among the busking community as a whole – a mutual respect which must be shown to one another. He also had to learn on the fly about technique, amplifiers, what songs to play and when to play them, and so on. Most of all, he learned about how much you can make in tips, compared against the amount of foot traffic and people that stop to hear your performances.

“The secret is covers,” Renner said. “At first, covers weren’t what I wanted, but I got a lot of insight on great composers and artists. Learn a lot of songs, how chord progressions work. Then you can take that and adapt it, make it your own.”

Renner has a number of original songs under his belt, as well. As for the inspiration behind his songs, he said it always varies based on the song, and what is happening in his life at the time.

“Some of my original songs I’ve been writing for years, while others I finish on the spot, before the hour is up,” Renner said. “I usually start with a good chord progression – I’ve always been better starting with chords and melodies, then matching words to them, rather than the other way around.”

An Early Start In Music

Renner said music had always been around his household. His father played guitar fairly well – he wanted to learn, too, but was afraid to ask. When he was in fifth grade, Renner’s mother forced him to play the piano.

“I played nursery rhymes… I hated it,” he said. “But I guess looking back, even that helped me learn the importance of practice, and it grew my ear for music.”

He began to play guitar early, but it just wouldn’t stick. Renner’s true passion was revealed when his classmate took up the drums, and he followed soon after.

“My friend introduced me to Travis Barker, the drummer from Blink-182, and I tried the drums – and it just clicked,” he said. “I loved it. I spent a lot of time practicing to get better. My friend taught me beats during the day at school, and I went to Guitar Center every day in the afternoon to practice them in the drum room.”

Renner loves playing the drums, but in addition to drums, guitar, and a bit of piano, he also knows keyboard, ukulele, bass, and is trying to learn the violin. He used his talents to form a group during his school years first, where he played the drums, and brought in a guitarist and some other players. They played hip-hop/indie rock fusion and called themselves Tiger Heist.

“Honestly, we just picked the name because it sounded cool,” Renner said. “We looked up the name to make sure it wasn’t taken by another group. As it turned out, it was a slang term for an inside-job bank robbery back in the 40’s and 50’s. That locked it for us.”

Unfortunately, the group as it was then did not last, but Renner kept the name as he went out on his own as a solo performer. He has since quit his job and devoted everything to music.

“I didn’t have a set list or a plan… my first seven months, I lived on friends’ couches, truly living the ‘starving artist’ lifestyle,” Renner said. “I knew about street performing, I knew I could do that. But it wasn’t until I heard about the performer Passenger – and saw his successful performances and videos on YouTube, and all his CD sales just from street performing – then I knew it was possible. I knew I could do it. I got the gear I needed, and started marketing myself as a street performer.

Street performing has come with its own set of challenges for Renner, including a territorial street performer from another corner, drunken pedestrians yelling into his microphone, and rough crowds.

“With street performing, you never know what will happen,” he said. “Once, I had people not digging my music, and a really mean-looking guy walked right up to me and turned off my amp, right in the middle of my song. I guess you never know what might happen – but I still love doing it.”

Another obstacle buskers have to work with can be legal barriers to performing. While Renner is fairly certain Phoenix accepts and welcomes street performing, other cities have more strict policies, particularly when it comes to performing plugged into an amplifier.

For example, Renner found out the hard way in Arizona some cities require a permit to play with an amp. He was stopped in Tempe by the police after 25 minutes of performing and told he needed a permit. When he tried to ask about getting a permit, he was told playing in Tempe with an amp requires a $130 each time you play, and to get it, you have to state in advance where you want to play, and for how long.

“I would love to see the laws on street performing relaxed,” he said. “I know the laws are there for a reason – if you take them away, a lot of people (who may need more practice first) might turn their amps way up, and hurt the reputation of street performing overall. And we don’t want people with not enough experience or skill giving street performers a bad name, but on the other hand, they have the right to play, too… It’s definitely a tough call.”

A New Start for Tiger Heist

Renner has recently finished writing the songs for his upcoming album, and is now playing a number of pre-arranged performances at local restaurants, like Potbelly Sandwich Shop in Phoenix. While he continues to perform on street corners, he knows performing in set venues is another great way to network and spread the word about his performances.

“You lose a lot of freedom playing in venues, but it’s more professional,” he said.

A lot of his attention is also moving toward getting his album recorded, as well as his CD release party, with a tentative date set for May 16.

Renner also hopes to get a blog started, full of tips and advice on busking for street performer hopefuls. His dream for later on is to start a non-profit dedicated to sending used guitars to other areas, such as Africa, where they can find new life teaching new people to play and love music.

But for now, his advice to people hoping to learn to play guitar, or work their way up to street performing: just do it.

“Ask someone – someone who won’t just tell you what you want to hear,” Renner said. “Ask them if you’re ready to play in front of others. Memorize 10 to 15 songs, minimum. When you master those and get bored with them, then you’re ready. Being on the streets is awesome; you get so much free exposure… I wish I’d known about street performing earlier.”

Find “Tiger Heist” on ReverbNation at or catch him every First Friday in downtown Phoenix.