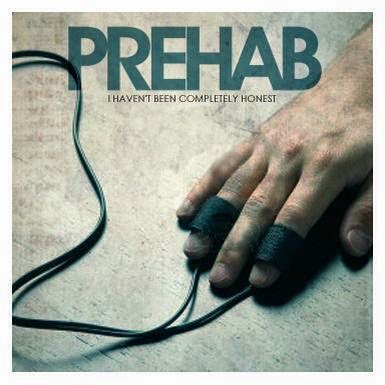 I had no idea what I expected when I first picked up Prehab’s latest album I Haven’t Been Completely Honest. Released just over a year ago, it’s not music I would generally listen to but it’s not nearly as bad as it could be. In fact, I kinda’ like it. Sometimes you just need rocknroll to be what it is best – simple and loud.

The EP opens with “Liar Liar”, a rollicking good number the assuredly sets the pace for I Haven’t Been Completely Honest. The main riff is really compelling. It’s wonderful to hear Prehab come alive on “Liar Liar” – a new song that, for me, brought back old memories.

Following that is “False Horizon”, another awesome hard rock song that ramps up the energy well beyond the first track. At this point of the album, I wasn’t sure if Prehab was comprised of young kids playing a throwback 90s sound, or older rockers coming out with modern takes on classic “Tempe rock” themes. It turns out the latter is true.

Prehab began as the Bedspins, playing Mill Ave and the Southwest for around 5 years while garnering over 500 live shows between ’93 and ’98. Almost a decade after calling it quits, band members Chris Kay, Jason Kay, Chris Cantu and Jeff Bourne reunited and released their first full length as the now known Prehab, One Is Too Many (a Thousand Is Never Enough), and began playing locally once more. I Haven’t Been Completely Honest marks the second release from the band in their current incarnation.

On “Last Time”, Prehab mellows out a bit on I Haven’t Been Completely Honest and definitely showcases the roots of this band. “Last Time” has authentic Americana feel that any fan of the genre will admire.

“Not Coming Home” kicks it back into high gear again. It has a great sing-a-long feel including a hooky chorus and calls of “HEY! HEY! HEY!”

The final track, “Breakup Song” is another Tempe Rock classic in the making. Solid vocals, a bitchin’ guitar solo, all over a warm bottom end. An excellent way to finish off the EP.

It must be said that shortly after the EP’s completion, Phillip Rhodes of Gin Blossoms fame stepped on board as drummer and songwriter, filling the spot left by longtime drummer Jeff Bourne. Catch Prehab perform with Fairy Bones at the Hotel Monte Vista in Flagstaff on Friday May 16th!

For more info on Prehab, visit their ReverbNation page. Or, to preview I Haven’t Been Completely Honest, head to the band’s website here.