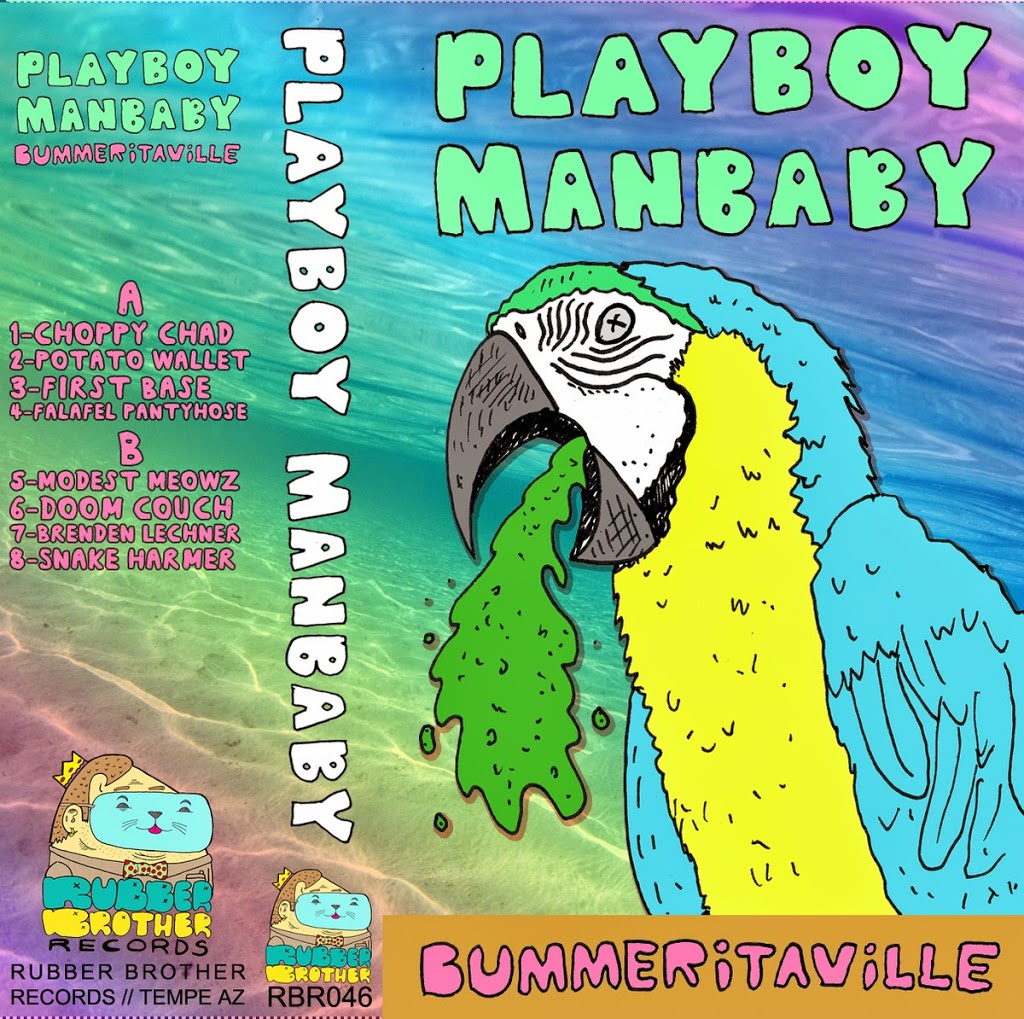 Bummeritaville is Playboy Manbaby’s follow up to the Obsessive Repulsive EP that came out last year. This is their longest release to date clocking in at just under half an hour and shows the band taking a more ambitious route. The production value is definitely bumped up and this project has more of an audible low-end compared to past works.

Things start off with a hard-hitting drum beat on the opener “Choppy Chad”.  The track does a great job of incorporating hard riffs with a slow, melodic guitar moment halfway through the song. Following this is “Potato Wallet” which begins with a killer, punchy bass line. Later, the bass is the main instrument carrying the rhythm during the bridge as front man Robbie Pfeffer delivers an intense spoken word verse before everything comes back together, louder and more pummeling than before.

The tune “First Base” is probably the most straight-forward moment, instrumentally speaking, on this album and lyrically depicts someone who’s trying to have a one-night stand. The feel is very fun and playful, like the band itself. This leads into “Falafel Pantyhose,” a track that rattles off a mean groove that feels somewhat funk inspired. It rises with intensity as Robbie counts off the high-speed finale that is sure to send any crowd into a frantic circle pit.

I love the rising horns opening “Modest Meowz,” they feel like a grand celebration is ready to begin. It also features the catchiest refrain in this collection of songs and is guaranteed to stick with you after only a couple of listens. “Doom Couch” is a hilarious anthem for deadbeat boyfriends. The bright guitar chords in the verse contrast nicely with the tough power chords in the hook. Things cool down halfway through and patiently build as the lyrics “no cash, no time, oh girl won’t you be mine” are chanted until it busts into a hectic ending starring a sharp guitar solo.

“Brenden Lechner” and “Snake Harmer” have already proven to be two crowd-pleasers since they were first released in January on Scum Brothers, a split with Petty Things. The first shows the band’s ska influence. Once again, aggression mixes perfectly with twinkly guitar notes and a memorable vocal melody during the chorus. Kicking off “Snake Harmer” is this incredible tribal drum beat that the guitar and bass compliment and ride strongly. The vocals are harsh and urgent while the lyrics portray the song’s protagonist as a deranged kidnapper threatening to kill a man’s wife if he doesn’t pay the ransom.

Overall, I think the band has really stepped up their songwriting game and have explored more fresh sounds to make their own. If there’s at least one thing to admire about this album, it’s the ambition. Many bands find a formula that works well enough and merely settle, but Bummeritaville looks to top the band’s past work and I would say it succeeds.