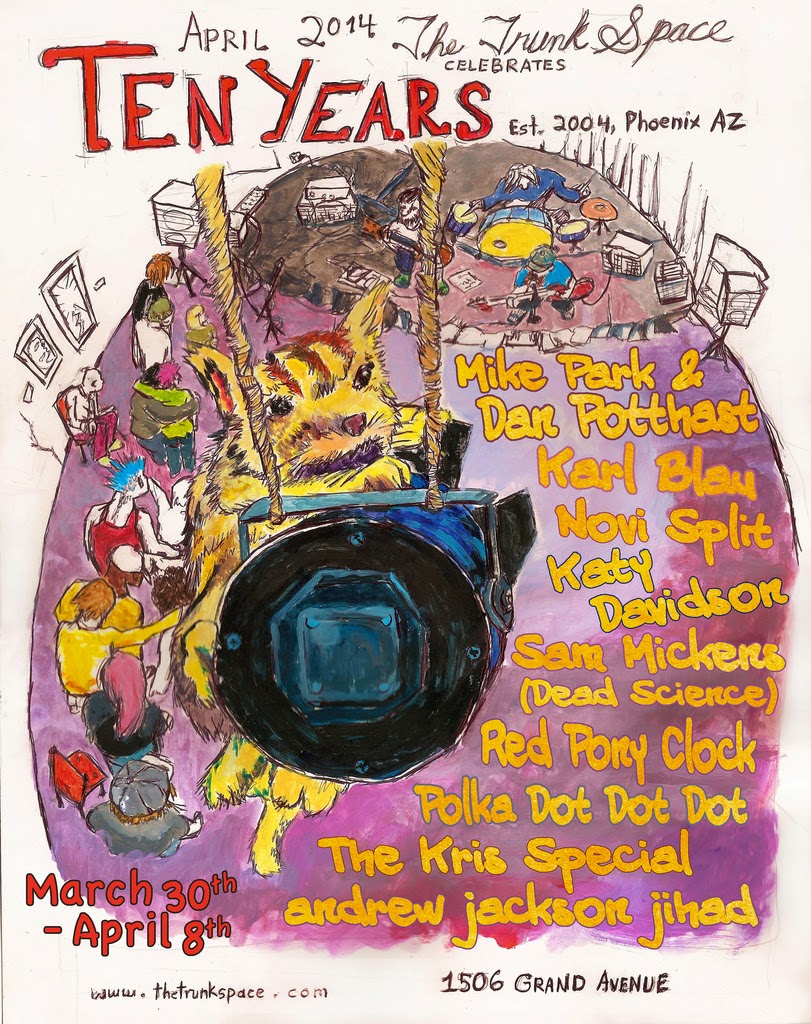 The Trunk Space has become much more than a venue during the course of their 10 year run thus far. They’ve become a key player in the Valley’s developing arts scene, a launching pad for new acts, and a hub for all the wondrous and strange and wondrously strange musicians that venture through our town from other locales, like Portland or Japan.

This year saw the launch of the Trunk Space’s fundraising project. The effort was aimed at raising not only the funds needed for the massive celebration planned to mark their first decade, but, more importantly, the money for a new air conditioning unit. This might not seem like a big deal to our readers in California or Colorado, but for our Arizona constituent, I’m sure you understand. Playing the Trunk Space in the summertime, or even attending a show during our “warm season”, has become a right of passage, an endurance tests for fans and performers alike, and adds to the experience a bonding element that emerges from profuse sweating with strangers pressed against you. This is all about to change, thank the gods.

Before we get to feel that cool rush of air from INSIDE the Trunk Space this summer, Steph and JRC, owners of the Trunk Space, have planned a truly spectacular event to mark the occasion. Ten days of music from some of the best and feistiest bands to grace the TS stages are going to be filling the bill every night starting tonight!

The event, known as the Indie 500 because the ultimate goal is to reach 500 songs performed over the next 10 days, kicks off tonight (Sunday, March 30th) when some of our very favorites from the Valley (like JJCnV, Liam and the Ladies, and French Girls) will be joined by Mike Park and Dan Potthast.

But the fun doesn’t stop there. Over the next ten days, the music just keeps coming. Acts like Treasure Mammal and Back Ted N-Ted (Wednesday, April 2nd), Man-Cat (Monday, April 7th), Stephen Steinbrink (Tuesday, April 8th), and tons more are slated to contribute their tunes to the venue’s ultimate goal of 500 songs before these ten days expire. For a complete schedule of bands, please refer to the Trunk Space’s show calendar here (also a great resource for planning your monthly show schedule EVERY month of the year).

Hope to see you all there!