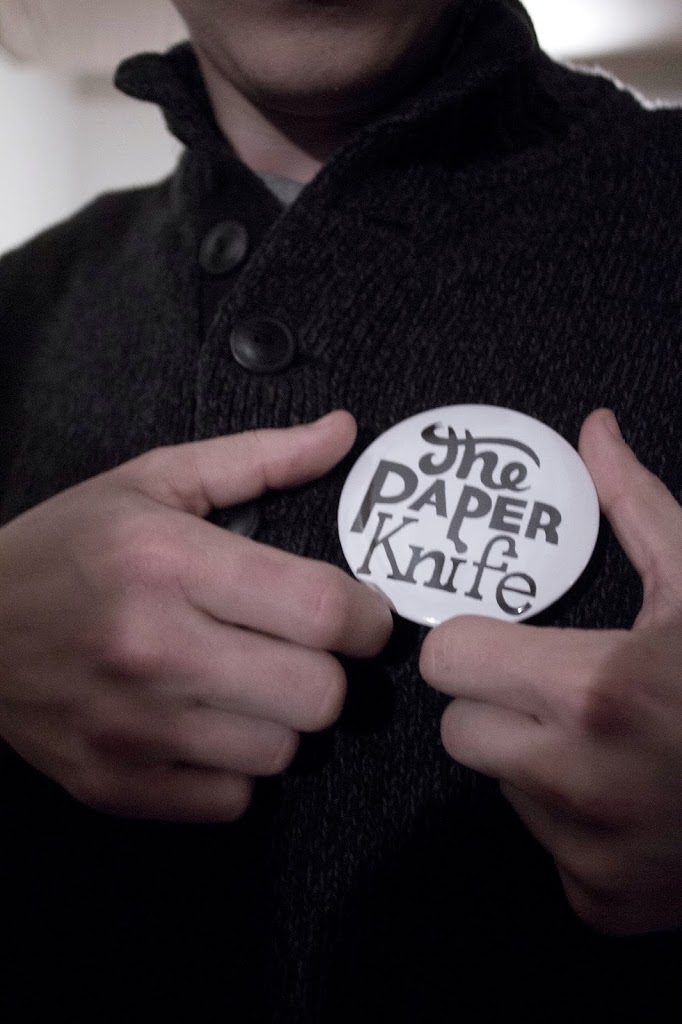 Parliament in Tempe has played host to some pretty incredible events this year, but this time around Rubber Brother Records is not laying claim to all the action. No, there’s another group of movers and shakers gathering force for the good of creatives everywhere: the art collective known as The Paper Knife.

The foursome behind the Paper Knife (Cody Inglis, Evan Bisbee, Isaac Parker, and Robbie Boccelli) has been keeping busy. In addition to the monthly visual arts show at Parliament, the group is also responsible for a bi-monthly jazz night, and they’re planning on moving into the realm of print with a loose leaf publication slated for release later this month.

There is a common thread that runs through the men of The Paper Knife that extends beyond Cave Creek childhoods and mutual Matthew Tanner adoration, and that is a deeply felt love for art, both its creation and its propagation.

When I met with the members of the Paper Knife, I was first struck by how sensitive the group seemed to misrepresentation. Usually such tendencies are the result of “bad press,” or, mainly, the all too common misquotations that grace local press and bloggers alike, but in speaking with the Paper Knife, I realized this apprehension stems from another source entirely.

The Paper Knife rejects general classifications because they are an entirely organic enterprise, subject to change at any time in response to the needs and interests of their own group and the community they serve. This month might be about Jazz and visual art showcases. The coming months could bring unforeseeable changes based on where the group decides to point their collective energy. 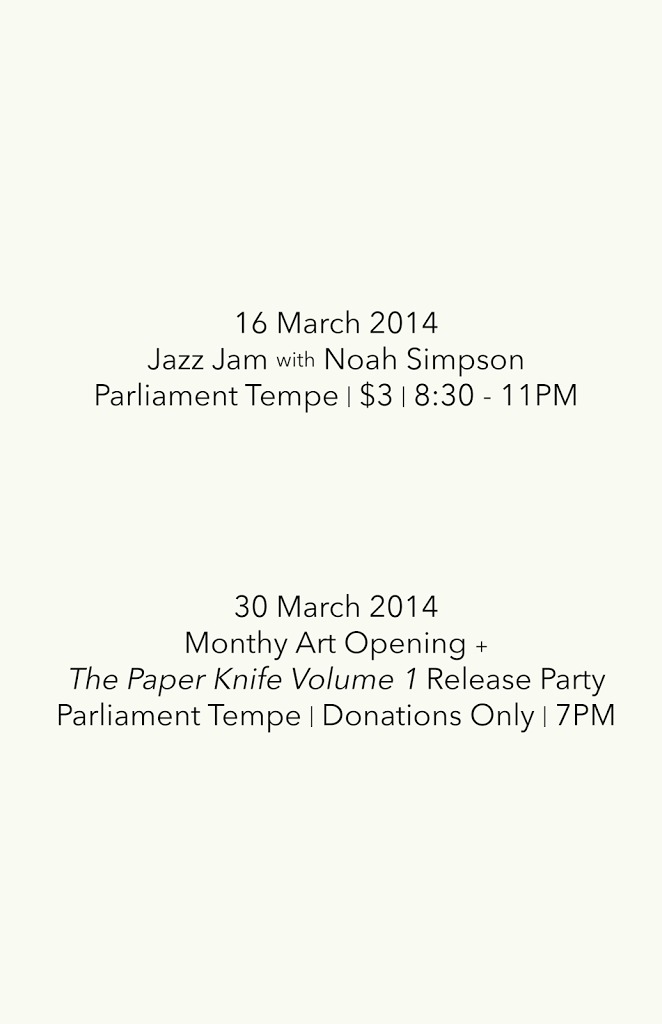 Much like the development of the Paper Knife itself, my own interest in the project resulted from a natural evolution with which I’m sure many fans of the project can identify. I found myself at Parliament one fine Sunday evening to check out the jazz show I’d heard tell of. Inside I found tables set with candles and flowers, furniture procured from home dining sets and living rooms, and young listeners everywhere bobbing their heads to intricate bass work coming from an upright on stage. I was immediately enthralled.

A conversation with some folks outside revealed that the same group responsible for hosting the jazz night was going to be holding their first visual art show, The Paper Knife & Parliament Get Physical. I made sure I was there.

The collection showed cohesion and some real potential from new artists. I was surprised to discover that, like the organization itself, the show developed naturally as artists submitted work to the group. The Paper Knife neither assigned themes nor attached stipulations. Consequently, the cohesion in the work emerged either from the collective subconscious or the effects of what is “trending” in art right now. And, it totally worked. The show had a presentness that was refreshing. Even the artists still struggling to find their own voice experimented with form or construction in ways that clearly spoke of the direction art is moving.

The Paper Knife applies this organic approach to all their endeavors. One can’t say with any certainty what they’ll be up to a year from now beyond “something worth experiencing.” In the not so distant future, however, The Paper Knife will be releasing their first print publication at Parliament. The event marking the release will also be a multi-media venture and, in case you have caught on yet, this rejection of traditional constraints is an ongoing theme within the Paper Knife. They’ll be bringing in some help when it comes to the printed product from another local artistic undertaking, Art Problems. That makes this all the more exciting for those of us who saw the show/publication from Art Problems on March 1st.

There will be an art show as well as a live music event to accompany the release of the first Paper Knife publication. The Wavelengths will be making their much anticipated return to Tempe stages that night. None too surprising considering the majority of The Paper Knife can also be counted on the Wavelengths roster.

Before that goes down, however, the Paper Knife will be hosting one of its famed jazz nights at Parliament once again. The next one is this Sunday and it promises to be extra special as musicians will be mixing things up for a Jazz Jam hosted by Noah Simpson. For more on this event, head here. And, as part and parcel of the Paper Knife enterprise, some recordings from their jazz events can be heard here.

So… live music, visual art, publishing, and now recording. In combining the efforts of Robbie, Isaac, Evan, and Cody, The Paper Knife has created an eclectic pool of talent from which to draw. I, for one, am excited to witness what’s coming.

You can keep up with the Paper Knife through their website here or their Facebook page here.