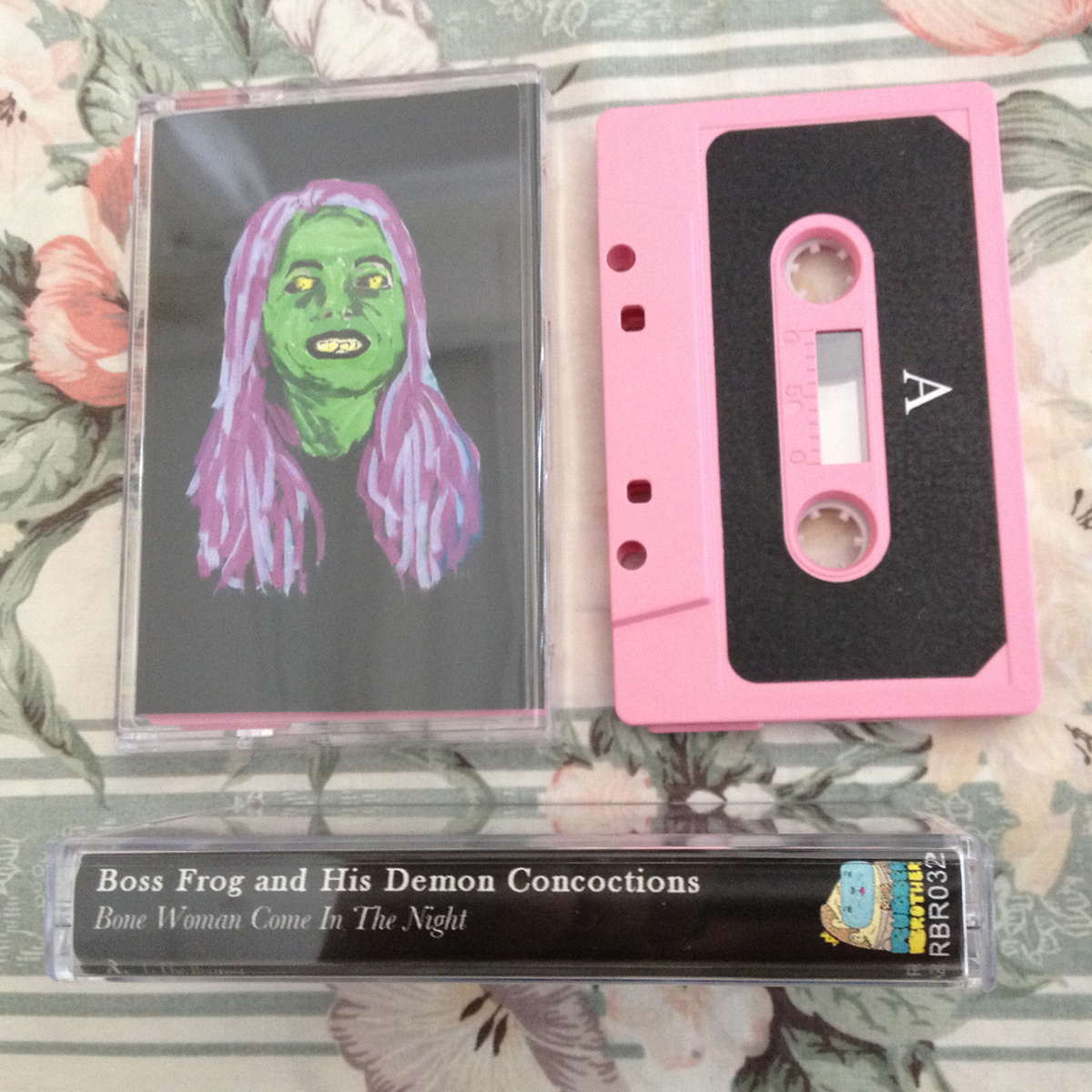 Bone Woman Come in the Night

I’ve been waiting for this tape. Ever since the digital release floated our way and we caught the Boss Frog fire. And, if you’ve ever seen Boss Frog live, you have too. Unless, of course, you have no fire in your soul. For the uninitiated, fret not. Bone Woman Come in the Night offers a stellar introduction to the goodness that is Boss Frog.

As soon as the road rough voice of Jack Bennett kicks in on “The Bystreet”, the first track of Bone Woman Come in the Night, you’ll be hooked too. Bennett lays it down on “The Rain” all Neville-style so don’t go thinking he’s a one trick pony; kid’s got range.

The bluesy, psychedelic rock of Boss Frog is certain to please, particularly with fans of retro-refurbishment. The talented players of Boss Frog (Cody Inglis, Isaac Parker, Dalton Kelchner, Matthew Tanner, and Austin Rickert) keep it fresh, eyes ever forward, but elements of old school funk and even disco echo throughout the album.

“Put a Bigger Price Up” reminds me of 60s Brit Invasion bands like The Animals while “Are You Aware” makes me think of 50s beach movies a la Frankie & Annette. “Got Nothing To Do With It” definitely has tinges of Michael Jackson’s Off the Wall era and earlier disco of the late 70s. Boss Frog takes the best of rocknroll and applies it seamlessly to contemporary modes of music.

Listen to Bone Woman Come in the Night here and purchase your limited edition Rubber Brother Records cassette tape while supplies last. Word has it, the band will be in the studio soon to record a couple more tracks. We’re excited to hear what comes out of the studio because we’re definitely digging what the band was able to accomplish on this release recorded in Jack’s mother’s living room. Let’s hear it for home recording!

And, while we’re at it, make sure you get out to see Boss Frog live as soon as you can. They have a great performative aspect that has to be witnessed to be understood. Between an injured drummer (Tanner) and a part in U of A’s production of Oklahoma (Bennett), the band is laying low for the time being, but I suggest following their Facebook page (here) because they’ll be springing back into action here shortly. Between now and then you should have time to learn all the words to Bone Woman Come into the Night. Get on it.