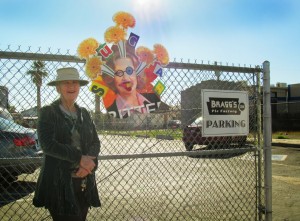 Folks who frequent the quirky, artsy strip of Grand Avenue that runs roughly between 7th and 15th Avenues might have noticed this sassy upstart bustling about the neighborhood. Maybe you’ve seen her in her gallery/curiosity shop, Kooky Krafts? Or perhaps you’ve caught her planting flowers or vegetables in available patches of earth on the side of the street? If you haven’t seen the woman herself, you’ve most definitely seen her artwork decorating the block. Re-vamped political posters, mutant piñatas, and the Kooky Krafts mural add more than color to the formerly drab stretch of downtown Phoenix. Beatrice Moore moved to the district in the early 90s and has been a force for the good of the ‘hood ever since. She brings life and distinction to the growing Grand Avenue District, encouraging innovative business owners and adventuring patrons to take notice.
_

[I] moved to the Oakland-University Park neighborhood in 1986 to a historic bungalow located at 15th Avenue and Fillmore. Moved to the old historic La Amapola Bar as a live work space downtown around 1988, after utilizing a studio next door at the Madison Studios complex for about 2 years. Founded the first Art Detour Annual Artwalk in 1988-89. Got relocated for the Suns Arena around 1990 and moved catty corner to the historic Icehouse in the Hasayampa Creamery building for a couple of years. Bought a building on Grand in 1992 and made the move to that live/work space in 1994 – mainly to get out of the path of very speculative downtown development.

[I’m] inspired by the diversity in the Grand Avenue area, which includes several historic neighborhoods and lots of layers of humanity. Inspired by opportunities to make things and display them in very public situations for all to enjoy, without any expectations related to art criticism, monetary sales, hanging on to things, legacies, etc. I created various installations for the Stop n’ Look: A Visual Community Resource windows in our live/work space for about 12 years beginning in 1994. This was a venue for both myself and other artists (who were given stipends) to create work for non-traditional installations facing Grand Avenue – everything from art to educational displays, children’s work, political, and historic commentary. I like making things that are not for sale and are temporary; that will eventually fall apart, like the Hanging Gardens and Woven Fences project that I currently head up each year as part of the Grand Avenue Festival.  I figure there’s already enough junk in the world so it’s okay if what you make decomposes sooner rather than later.

When we first came to Arizona I liked the variety in landscapes, particularly the desert landscape. We did not want to move to a hip arts epicenter and personally liked the fact that there was a sense of isolation, potential, authenticity and small town feel about Phoenix. That was back in 1986 when we moved here after living in Europe for two years. When there were still some department stores left downtown, a Woolworths, various Ma and Pa businesses, and a simplicity. Some of my best memories are of walking the dog in the visually interesting, but somewhat deserted, warehouse district in the evenings and along the railroad tracks. That view sure beat the huge, overpowering and ugly walls of ads you see down there now. 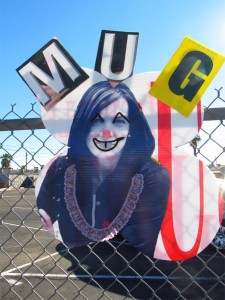 You will see my work here and there, right now mainly as part of creative projects that are self-motivated and created outside in the Lower Grand Avenue Arts and Small Business district. I am also re-establishing my painting studio in the old R & R Motorcycle building next to the Bikini Lounge and it will be open occasionally to the public, when I feel like it. I am not motivated to show in galleries and that trajectory. I like being independent and just doing my own thing without having to get approval from anyone and don’t care about building a resume and being part of the art establishment in its many forms and permutations.

Right now I would like to get all my messes cleaned up before I die : ) and everything organized and neatly stored (especially my supplies so I can find them easily!).  I want to get my studio space cleaned out and renovated and USABLE; my partner Tony’s studio building renovated and finished; our live/work space finished (it’s been about half finished for about 20 years now); and one last building we have at Polk and 15th Avenue completed.  It’s all a matter of having the time and money to do so.  And of course I want to continue to do purely creative projects, as those are what keep life fun and personally relevant.

I don’t have a mantra. But I have created a sort of mantra for the upcoming year 2014. I have adopted and tweaked one of Timothy Leary’s directives. His was “Turn On, Tune In, Drop Out”. Mine is going to be “Turn Off, Tune Out, Drop Out”. This reflects my desire to get dis-involved with social media much more this coming year, pull back from organizations that have a tendency to wear you out, and to decide what projects are indeed the most important to me. If you try to do everything (or too much) you end up neglecting those things (and people) that are truly important to you. Let go of other people’s expectations of you and hone in on your own expectations of yourself. 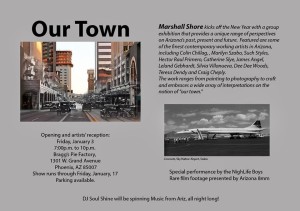