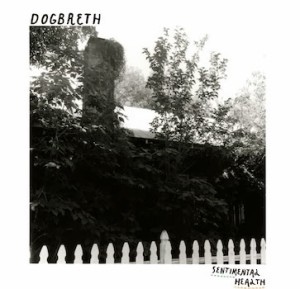 Dogbreth is a pop-punk band outta Phoenix known for their positive messages, incredibly fun music, and feel-good attitude. The group is getting ready to celebrate the release of their second full-length album Sentimental Health later this month.

The band built anticipation for this album with the release of Cassingle (and loving it!) on Rubber Brother Records which featured the tracks “Too Much Too Fast” and “How Long”. The first of these tracks kicks off the album nicely and gets the momentum going.  The song deals with realizing you didn’t know when to shut your mouth last night, something we can all relate to… painfully.  Next up is “How Long” and this song features bassist Erin Caldwell grabbing the reins and performing main vocals. This switch up is a nice change of pace and adds to the sonic variety this album offers.

Tracks like “New Friend” and “Shakin’” are very danceable and will most likely get people moving at shows. “Tru 2 U” has soaring guitar leads and finishes with a fiery solo that has that true rocknroll feel. “Blueprints” is an acoustic guitar piece with loud feedback behind it giving it a heavy, lumbering quality. 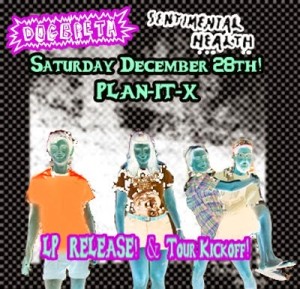 Most songs offer a unique feeling that make them stand out separately but work together to create an entertaining album from start to finish. The lyrics are easy to make a connection with whether they’re about being excited to have a new friend, having trouble focusing on your work, or the love that’s all around us. The music here is lively and it is made to dance and sing along to with your friends.

Sentimental Health is streaming on their bandcamp for free (here), but you can pick up the cassette from Lost Sound Tapes and the LP from Plan-It-X records!

Make sure you head out to the official release show (and tour kickoff) on December 28th at the Trunk Space!