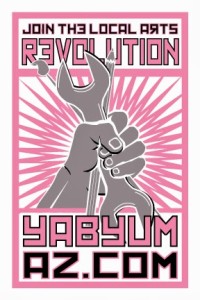 Yesterday, well not really yesterday but it sounds way more dramatic, the editors of Yab Yum (two of the most integrified people I have met in the last decade and the Valley is lucky to have them) sent me a list of a new albums for my opinion.

As luck would have it, I forgot to bring my ear buds to work (sssh, they don’t know I write reviews at work), and so I decided to listen to the music au natural, sans headphones, you get the idea.

The music started and half way through the third song, my co-worker – I work in an open space concept – says, “Hey, is that new Interpol?”

From there my mood and opinion immediately changed. I deleted the glowing comments I had written and rewrote the piece. Expressing exactly how I felt. Writing that, “They are good musicians but they sound exactly like Interpol.” And that, “There was once a wise person who said, “The art of creativity is concealing your sources and you’re not very good at hiding them.”

When I finished and re-read the piece, and I was like, “I can’t send this in.” So I searched out a trusted friend and fellow musician who I admire and respect even though I hate them because they are so freaking good, and sent it to said person to make sure I wasn’t going completely “bash piece”.

He/she told me that I was being “wishy-washy”. “Wow!” I said to myself, “remind me not to get your opinion on my music”. But they were correct.

Then, I sought advice from my editors.

“If that is what you really thought, you should write it,” was the sage advice that came back to me.

And that brings us to the part of the story where I am up at 3 AM agonizing over if I was going to submit it for publication.

Let me first state, it’s difficult giving an opinion on music, especially since I am musician. I mean, when I read negative comments about our music, and I have, it kills me. “Don’t they know that I worked hard on that?” and “What do they know about anything?” are some of things I say aloud, and some things I say are not fit to print here. So, I treat the exercise as more “opinion” than “review”.

In fact, I woke up this morning to two “thank you very much but no thank you” emails from radio stations. And, frankly, I was pissed. More confused, no…I was pissed.

But then again, it doesn’t matter.

As an artist, we/you/I have assumed the risks of critique – deal with it. And, frankly, I have read a lot of reviews that are so filled with wonderfulness and awesomefulness for the music that it goes way beyond sucking up to the point that the artist, or the reader for the matter, doesn’t really get an honest opinion.

Lookit, I am not advocating for Mean Girls bashing, here. Honesty with a healthy dose of integrity and constructive criticism – that’s what is going to make the artist, and the music and the community on the whole, better in the long run. Not a tongue bath.

One of the first reviews my band received was right here on Yab Yum. And, of course I didn’t agree with everything that was written, but you know what? I read it, learned from it, and the music is better because of it.

And I can promise you guys that you will always get an opinion that will always be constructive, so please, read it that way.

In other words: Bravely submit your music as bravely as you push the record button.

Dear Band That Shall Remain Nameless,

You sound exactly like Interpol and you need to take an honest listen to your music and change it. Not because you are bad musicians – but because it’s not original and you got more in you than that.