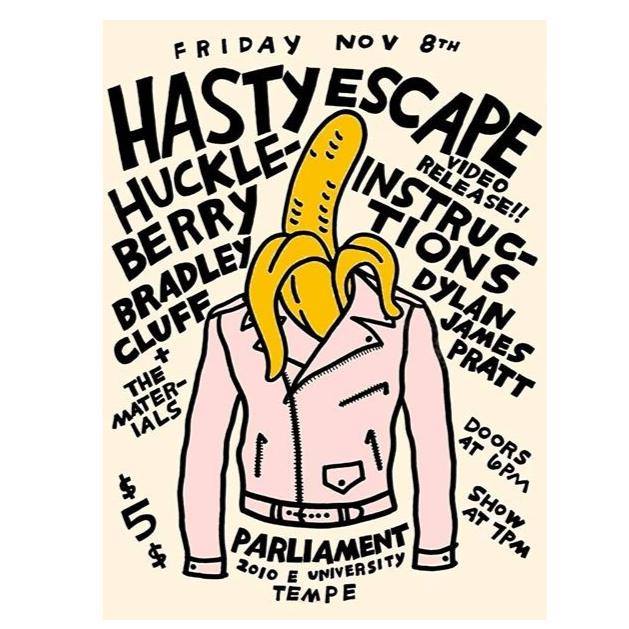 This past Friday, Hasty Escape played a release show for their new tape out now on Rubber Brother Records. The show also doubled as their music video premiere, showing for the first time at Tempe’s Parliament. They invited some friends to play and celebrate a momentous occasion.

Starting off the night was singer-songwriter Dylan Pratt. Dylan switched between playing electric guitar, acoustic guitar, and the keyboard throughout his entire set backed solely by drums. His songs range from stripped-down folk to bright and indie-rock influenced, and soft piano led pieces. The vocal delivery ranges from soft and tender to powerful with a sense of urgency as he belts out sincere, heartfelt lyrics. As he stood on stage, he was just being himself, telling cheesy jokes while he tuned his instrument; his music and stage presence feel like direct extensions of who he really is. It would make sense that he chooses to not go by an alias because when he’s on stage he is simply Dylan Pratt.
Following was Huckleberry who takes a very fresh, modern approach to Americana music with some distorted guitar, keyboard, pedal steel guitar, backed up by percussion and bass. Their music has feel-good vibes all over it and would make the perfect road trip soundtrack. Huckleberry’s songs sound like small whispers passed around the campfire that build up to epic stories. The tales are anthems for anyone who has taken a dip in the river with their buddies. They play a lively set and fans get a chance to see how all the instruments work together in perfect harmony.
Next up was Sundressed who got some people out of their seats and dancing. They play a fun take on rock with jangly guitars and occasionally gruff vocals with bass and drums providing a strong backbone and bright synthesizers adding a welcome touch. What makes this band stand out the most is their young, teenage attitude; at times riddled with angst but still looking for a good time at any given time. “C’mon it’s Friday night!” said lead vocalist Trevor Hedges as he encouraged more people to come up front.
Finally Hasty Escape finished things off for the evening. They started off by showing their brand new music video that was a dreamlike bombardment of strange visual images. It’s very logical considering their music consists of hazy pedal steel guitar, soothing vocals, and slow folky guitar. They’re a breath of fresh air for folk music and definitely set themselves apart from other groups with a slightly psychedelic edge to their music. Watching them on stage, it is clear they have a lot of fun playing music, which also makes their music very fun to listen to. Make sure you show your support for Hasty Escape by picking up their tape from Rubber Brother Records.
by Miguel Guzman
Contributing Writer