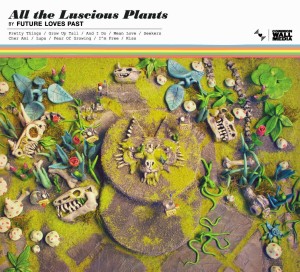 So here’s the deal: we at YabYum love Future Loves Past. It seems like forever ago now that we saw them perform at Mesa’s Second Friday. We rocked the shit out of the Future Loves Past EP when it came out. And sure, we mentioned Lush Fest and “Grow Up Tall” (especially after we mentioned them in our 2012 Bands We Should Have Covered), but never before have we featured just Future Loves Past in their own write-up. Thankfully, all that has now changed with the bands debut album All The Luscious Plants from Common Wall Media.

FLP consists of  Tristan DeDe (guitar, keys, vox), Sarah Hibner (vox, keys, percussion), Enrique Naranjo (drums), Eric W. Palmer (vox, bass, guitar) and Sean Wintrow (keys, bass, vox) and their sound is somewhat hard to describe, especially to write about, but I’ll do my best. I am paid the “big bucks” after all.

During continual listening of All The Luscious Plants I deemed a term appropriate to what I was hearing –  progressive pop. I had never thought of this term before so of course I looked it up on the Interwebs. What I read I agreed with: “the complexity of arrangements and musical structure found in [progressive rock] are combined with the catchiness, oftentimes simple melodies, and accessibility of [pop] to bring a sound distinct from both.” I couldn’t think of better way to describe FLP. Probably why I quoted it. Even the bands that were brought to my attention remind me, in essence, of the Past’s sound. Groups like the Beach Boys and the Moody Blues, the Dirty Projectors and the Alan Parsons Project, Supertramp and Super Furry Animals.

Believe me though, Future Loves Past definitely have got their own thing going on. Even a quick listen of Plants will show you that. Opening All The Luscious Plants  is “Pretty Things”, a driving, funky dance number that will literally “take you so far away” from whatever it is that you’re doing, you better have a safety cable attached to your former thoughts if want to get them back.

“Grow Up Tall”, the first single and second track of the album, delivers a theme that remains constant throughout the album – growing. Whether through factual personal narrative or metaphorical relation to flora, the act and art of growing continually sprouts up on All The Luscious Plants.

Formerly released tracks “Mean Love” and “Seekers” have been re-recorded and sound better than ever. Bob Hoag and his Flying Blanket Studios recorded, engineered, and mixed the whole shabang and really, I couldn’t think of a better studio to capture the crisp, beautiful pop that is Future Loves Past.

The theme of growth appears again in “Fear of Growing”. Currently my favorite song off this album, this track has everything I want from FLP – a solid bass and drum groove, wicked funky guitar, a sweet keyboard sound, and those stellar harmonic vocals.

The band really breaks it down on “I’m Free”. With an upbeat, almost reggae feel giving way to a lick driven, heavy rock chorus, “I’ve got to open up” will be gestating in your head for sure. I think I changed my mind. This is my favorite song now.

The final track of All The Luscious Plants is “Kiss,” and no, this isn’t a cover of the Prince song, though if anybody could pull off a Prince cover, I believe it could be these guys. This “Kiss” is a perfect closer: open drums, dancing bass, sweeping keyboards, wah-pedal guitar, and of course, dreamy back-up and lead vocals. By the time this song ends you’re in just the mood for “Pretty Things” to come back on and start the listening cycle again!

If you don’t get to catch Future Loves Past perform at the Crescent Ballroom tonight as part of the Dry River Yacht Club El Tigre release, make sure to catch them on December 28th with Bogan Via, Vial of Sound and Roar at the Crescent. Maybe Future Loves Past will end up performing their next purported full length, Our Solar System, in its entirety. It’s been known to happen. In the meantime, make sure to dig All The Luscious Plants here.