Dry River Yacht Club has been making rounds on the local circuit for six years now and, this weekend, they are set to release their best album to date.

El Tigre opens with “Dead Mother Dearest”. The track was first recorded live for their 2011 release Family Portraits Calm Memory. Fans will definitely hear a difference between both versions of “Dead Mother Dearest”. The first noise to hit your ear is the wail of strings which fits perfectly with the gypsy sound that denotes Dry River Yacht Club as much as Garnet’s sultry voice.

Strange lyrical narratives paint surreal pictures and complete the circus-esque flair of DRYC’s musical production. Instrumentation includes a bassoon as well as a bass trombone and accordion, naturally. The songs’ construction speaks to an understanding of composition that goes well beyond the traditional bar band. Their tendency toward grand orchestral musings originally caught our attention a’ways back when we named Dry River the winner of our award for “Best Use of Unexpected Instrumentation” in 2009 for their debut album The Ugliest Princess. This same defining current runs through El Tigre, raising it in both quality and liveliness. 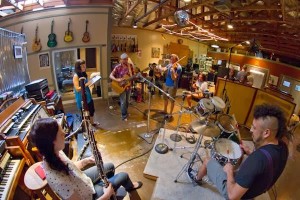 There is decidedly a unifying Dry River sound that shapes each track as a part of one whole. They might flex their songwriting muscles from time to time in offering a song that is a bit more folk or a little more indie than the rest, but there is an undeniable continuity in El Tigre from start to finish. Tracks move into one another giving the listener the sense of a singular experience rather than individual songs.

“Garden” has a folksier sound than the tracks leading up to it. “When You’re Down” has a slower, meandering pace and western sensibility. Isolated from the rest of El Tigre both tracks carry the Dry River brand… something a little wild and maybe even a little mystical.

For an early preview of the album, head here. Dry River shared a couple early tracks from El Tigre earlier this year. We’ve been eagerly awaiting the full release ever since but that time is nearly upon us.

The release show for El Tigre happens this weekend. Saturday at the Crescent Ballroom, Dry River Yacht Club will be celebrating the release of their album with Dylan Pratt, decker., Future Loves Past, and many more. For a complete list, check out the event’s page here. Tucson folk should head out to Plush on Friday to catch Dry River Yacht Club along with Sweet Ghost, The Tryst, and Missing Parts. 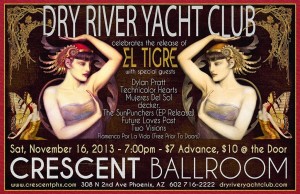