I am an artist and musician living and working in Phoenix, Arizona. Born and raised in Akron, OH, I graduated from Ohio University in Athens, OH with a BFA in studio arts. After a few years of  working and skateboarding most every evening in Venice Beach, I landed here. Years of commercial art ensued, including establishing and development of the art program for a Grateful Dead Merchandising licensee. In 2003 I began devoting more time to painting. Active in downtown PHX, I enjoy working in a variety of styles, often exploring new media, techniques and ideas. My “polynesian-pop” (tiki) works vary from pinatas and other unconventional objects to more traditional paintings and murals, such as the “Polly Rhythmic” mural at the Bikini Lounge in PHX and inclusion of a tiki pinata in the People’s Biennial, a 5-city touring museum exhibition. I am also a musician (Arabic and West African percussion), and was lead musician of the seminal music/dance troupe, Domba. Currently I perform with the Jamila Lotus Dance Carnival and with various projects in Phoenix, and at events across the U.S.

For my art, it was a postcard art show in 1987 at the Vox Gallery in downtown Akron, Ohio. That place was similar to downtown PHX at the same time, a “donut city” where artists were moving in to the fairly deserted city core for cheap rent and big spaces. For my music, it was at the Arizona Renaissance Festival in 1991 with a troupe named “Shahi Tukree”.

The skies, the landscape and the weather. I moved to PHX on statehood day, 1990. The temperature hit 122 in June, then I got snowed on that December. I really digged being able to see the Meat Puppets at Hollywood Alley for 3 bucks. More broadly, I like the lack of preconception and room for growth here. You’re free to experiment, mutate and become something that might not be as easy in other places where identity and structures are more established.

Grand Avenue Festival, the Bikini Lounge, Kooky Krafts. I have a large mural on the Wagon Wheel building on 7th Avenue south of Camelback. Occasionally at Second Fridays in downtown Mesa. The dance floor mandala at Plaza de Anaya studio in Tempe. Tiki Oasis in San Diego. Upcoming, a bowling bar in Hong Kong, that’ll be a hike though. Also tomsartproject.com.

To make physical a lot of the ideas for art projects I have on my list. I’d love to do a series of sky paintings around the Sea of Cortez. 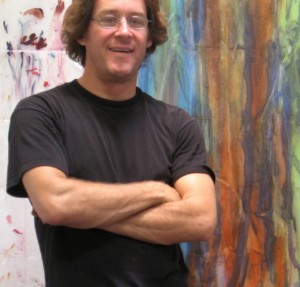