Lisa Starry’s Scorpius Dance Theatre has been bringing their unique brand of contemporary performing arts to Phoenix since 1999. This past weekend I caught my first performance from the company during their annual run of A Vampire Tale, something of a cult classic here in the Valley for dance lovers and vampire lovers alike. Saturday night marked the close of 10th year for A Vampire Tale, an event I already have plans to see next year as well.

fiends and then eaten. Conflicted love enters and adds a healthy dose of anguish to the storyline. The performance itself combines traditional and modern dance with aerial arts. This year also included aerial pole artistry which is as different from stripping as the name hopes to suggest.

This evening marked the final performance of David Starry, Lisa’s husband and company co-founder, as Viktor. He’s ready to turn the role over to another, feigning an aching back as the announcement was made to a packed house of disbelievers. After all, we just watched him descend into the theatre in a wicked display of physicality. But ten years is quite an impressive run for anyone.

Nicole Olson as the Vampire Queen and Alexis Stephens as Eve provided the perfect contrast of light and dark; striking innocence and alluring depravity. Jose Soto and Gavin Sisson were two of the most stand-out performances from the Vampire Klan for both their unholy athleticism and their commitment to their dark characters.  Lisa Hammond of the Vampire Klan captured my attention in group scenes with her nuanced humor in both movement and expression. Damon Dering was our “Strange Man” for the evening. He kept the audience on task and the narration lively… and he gave me candy. 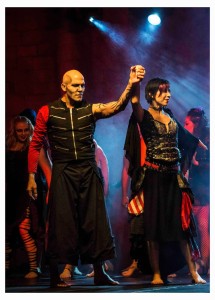 ASU grad and accomplished composer Kristofer Hill wrote most of the pieces heard throughout the evening, the exception being a well-placed inclusion of Nine Inch Nails’ “Something I Can Never Have”.

I’ve decided to see every show Lisa Starry and her company put on, forever. Next February I’m looking forward to The Kick-A but really I can’t wait for Catwalk which combines dance, fashion, and Duran Duran in July. How will I not love it?

Scorpius Dance Theatre Studio offers classes for those that want to move beyond astonished audience member to active participant. There are plans for a new aerial studio as well which will open in November for the brave and muscular (or soon-to-be muscular).