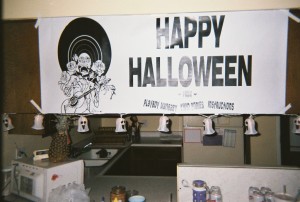 In the spirit of the season, Playboy Manbaby put together a Halloween house show this past Saturday. Playboy Manbaby has developed a reputation as one of the strongest live acts in the local scene and Tempe house shows are definitely this band’s niche. They brought along Rubber Brother Records label-mate Instructions and the newly founded Twin Ponies formed by former members of Tugboat. 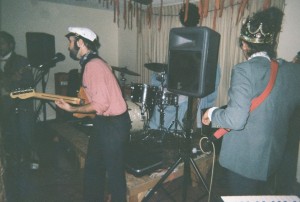 Kicking things off was the band Instructions who put out a fantastic tape earlier in the year on Rubber Brother Records. These guys have no difficulty in getting the crowd dancing. Instrumentally they are reminiscent of 90’s emo with strong bass playing locking in with punchy drums and pretty, melodic, and, at times, twinkly guitars. Take all this, add clean vocals and an up-tempo fun-loving attitude and you get Instructions. The band played a very energetic set that had everyone moving and singing along. They also surprised us with an awesome cover of the Ghostbuster’s theme song! I’m looking forward to any new material from them in the near future. 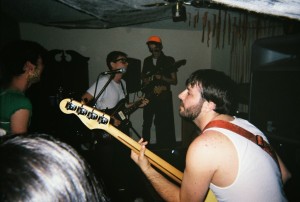 Twin Ponies are proving to be a very promising, up-and-coming band. Fresh off an excellent new EP titled Pores, they played a very tight set. The band started by creating a very murky atmosphere with a warm, thundering synthetic bass and slow melodic guitars. The tender, reverbed vocals cutting through the instrumentation produced a very haunting mood. Following with a more upbeat song, trading in the synth bass for bass guitar, Twin Ponies showed the crowd that they are not a one trick pony. The hard-hitting drums and faster chord progressions made for a unique, dance-inducing, melodic rock. Their ability to change direction with each song and create very moody tracks along with cheerful, lively songs is pretty amazing. Be on the lookout for these guys.

Finally, finishing things off was Playboy Manbaby; famous in the land of Tempe for their very unique sound borrowing from all different types of genres. Dirty garage rock guitars, pounding drums, memorable bass lines, fierce trumpet playing, and intense yelling vocal delivery create an unforgettable musical experience. They started things off with a brand new song that could be one of their most fiery, fast, and unforgiving yet. Robbie, the vocalist, thrashed about on the floor as he delivered harsh and powerful screams, throwing himself into the audience. The band added some new songs to their set list the past couple months. The new jams are going over great with the audience and already have people yelling the lyrics right back to them. I’m praying Playboy Manbaby is cooking up a new release for us. Until then, make sure you catch the band live if you have failed to do so already. 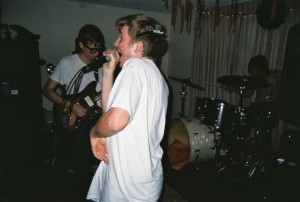