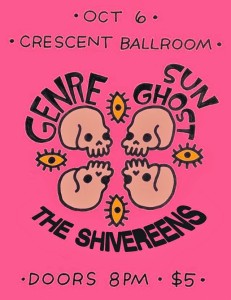 Sun Ghost has become a favorite of more than one of the YabYum staffers which is why we’re extra sad to say farewell to the band. The group recently announced that they will be going their separate ways this year but Sun Ghost assures us there are no hard feelings. The bandmates are just ready to move on to other projects.

Don’t start crying just yet, however. There are still a couple more chances to log some Sun Ghost time in before all is lost. This Sunday, Sun Ghost will be performing their LAST Phoenix set at the Crescent Ballroom. Genre and The Shivereens share the bill which promises an evening of musical good times for all involved.

Prior to the great dissolution, Sun Ghost is also set to perform at two of the upcoming Fall Festivals happening around this fine state: the Apache Lake Music Festival (Oct. 18-19) and the Sidepony Music Festival in Bisbee (Nov. 15-17).

Finally, their last hurrah will serve as a fitting end. Sun Ghost will be offering fans their annual Beatles’ tribute on December 20th and performing only Sgt. Pepper’s Lonely Hearts Club Band songs.

Make sure you head out this Sunday for your last chance to hear Sun Ghost performing their own songs on their own turf. The end of an era is upon us but we’ll go out celebrating. We look forward to hearing more from the members of Sun Ghost as they move on to new projects. Nick will be continuing to perform with his band Deer Leader and Trevor will continue to write songs on his own…

Come to think of it, maybe we should just view this breakup as a positive. Consider the possibility of expotentionally increasing the rad-ness of AZ music by dividing the members of a rad band into new streams of potential music making. Or, maybe I’m trying to identify the good thing in a sea of sadness in the face of no more Sun Ghost. Only time will tell.