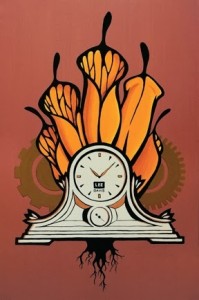 As you enter Eye Lounge you are transported into the imagination of artist Lee Davis. At first glance the gallery is filled with a dozen fascinating clock paintings but with closer examination the viewer discovers strange plants organically growing out of the timepieces. As an artist, Lee Davis aims to create “approachable conceptual art” to engage his audience while grabbing their attention with bold, recognizable imagery and humor. His new series of work is entitled Steam Chunk, focusing on “time as the premise of the series and the iconography is the melding of carnivorous plants with timepieces”, said Davis. The title for this new series came to him over time while working on his new series and “the end result wasn’t quite surrealism and it wasn’t quite steam punk; I chose to play on the words ‘chunk’ of biomass and ‘steam’ punk – ergo, “Steam Chunk”.

Mr. Davis’ series centers on the image of a clock, a strong color palette repeated throughout the entire series, bold outlines of forms, and subtly abstracted plants. In his painting “”Quantum Time Zones” we see a beautifully depicted floating clock with aggressive plants growing out of it ominously facing the viewer. He explores a wide variety of clocks and plants throughout the series. One can sense Mr. Davis’s love of science and humor in this new series focusing on the idea of “time.” Lee said “time is an axiom but also an abstraction, my goal was to relate time to something visually tangible.” Like with his painting “Primordial Circumstances” which depicts a grandfather clock with cogs and gears behind it and, of course, plants growing from it. Everyone will recognize the clock but they are not expecting to see the plants growing out of it. His paintings are far from quiet and he encourages the audience to examine the paintings closer. He prefers to paint using acrylic on canvas. 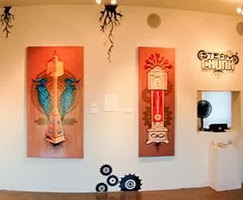 It is obvious that science aides, excites, and fuels Mr. Davis’ artwork. After such an engaging series what will his new work center on? Mr. Davis simply said, “Science gives me plenty of subjects to interpret with the arrangement (or perhaps derangement) of neurons in my head.” He is currently working on several new projects exploring “zombie insects, bioluminescence at abyssal ocean depths, and orbital space junk”, as well as “the debate of feathers on dinosaurs”. He will definitely keep his audience on their toes guessing what he will come up with next!

Since joining Eye Lounge in early 2012, Lee has continued to grow as an artist and exhibits more regularly around the valley. Through Eye Lounge Mr. Davis feels he receives “constructive feedback and resources of fellow Eye Lounge members [that] has helped to take my work to the next level.” Also Eye Lounge is one of the Valley’s top galleries and a founding member on Roosevelt Row. This artist collective has an impressive list of old and new members so keep your eye on Mr. Davis and his intriguing work in the future. Don’t miss this intriguing new exhibition Steam Chunk which runs from September 20th through October 13th at Eye Lounge. In addition, Eye Lounge has a members’ exhibit at ASU Gammage, which runs until October 7th. Eye Lounge will also be exhibition in December at Gallery Glendale at Westgate.

For more information about Lee Davis visit his website. Find out more about the Eye Lounge here. 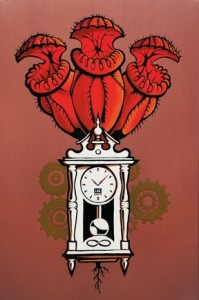 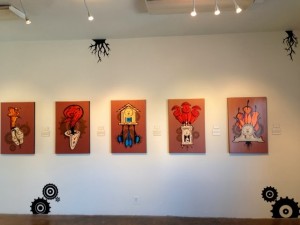