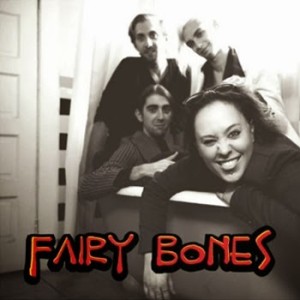 Just a little over a month ago we heard the first single from Fairy Bones’ first recording project as a group. Since then we’ve been counting down the days until the EP dropped. We’re thrilled that wait is finally over. The Fairy Bones EP has arrived.

The 5-track EP opens with “Like, Like” – the aforementioned single – which sets a lively pace upheld throughout the remaining tracks. Fairy Bones definitely has their own sound which is something I don’t get to say quite as often as I’d like. Synth-pop infused garage-punk combined with the diva-worthy vocals of frontwoman, Chelsey Louise.

Chelsey is fucking fierce and Bob Hoag of Flying Blanket did an amazing job of capturing the nuances of her voice without lifting them above the instrumentation in that awkward studio-style popularized by 90s lady crooners. Music is in her blood and she seems to embrace it in her every breath, even when sleeping. Roommate/bandmate Robert Ciuca claims Chelsey even sings in her sleep (thank you, Facebook). She has incredible range, power, and control. Just listen to “Filler, Baby” or “Anything”. Actually, just listen to any single track from Fairy Bones. Chelsey never disappoints. True story.

And, the band is able to back her up every step of the way. These musicians are tight. You can see it in their live shows and you can definitely hear it in The Fairy Bones EP.  When I called dibs on the new EP from the band the dialogue went something along the lines of “Say that they’re drummer is really good.”/ “And the guitarist.” / “Yeah, uh, they’re all really good.” Usually, it goes more along the lines of “Are you going to mention the hair / face tattoo / singular yet embarrassing live performance, etc. etc.?”

And did I mention that I love this band live? They’re like this adorable family of miscreant elves. Or, excuse me, Fairies. Whatever you prefer. Tthey will rock the roof off the house every single time… even if they’re tired, or sick, or it’s their second show of the night, or all three at once. The real power of their live show is the one thing missing from their EP, but we can’t have it all. So go see them live.

I’m sure you’ll have plenty of opportunities; this band is on the rise. Recently signed to 80/20 Records which hosts local heavy weights like Zero Zero and Captain Squeegee and Fairy Bones is ready to move on to new projects. Next year, they plan to release a full-length album of all new songs, head out on tour, and celebrate their one year anniversary which doesn’t happen until January. They’ve been keeping busy since the get-go and it’s looks like they’re just getting started!

We’ll keep you posted. In the meantime, check out The Fairy Bones EP available for purchase through iTunes or for preview through Spotify.