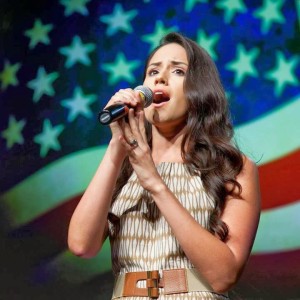 The Star-Spangled Banner has long been tagged as the most difficult song to sing. Many have tried. And, judging by the number of people who are routinely shown singing it incorrectly, it may just well be.

Very few have mastered it. Whitney Houston nailed her performance of the Anthem and it became a Top Ten hit. Roseanne Barr’s rendition on the other hand was a massive fail. In fact, it was so atrocious the fans booed her throughout the song. And on her way off the field she gave the fans a one-fingered salute.

Here in Phoenix, there is one woman who has elevated it to an art form.

By day, Erica Cardenas is a mild-mannered owner of a PR firm. But some days and nights, she routinely sings the Anthem before events throughout the Valley.

I recently caught up with this very busy businesswoman, “Mrs. Phoenix” 2013,  and mother of three and asked her how she became the go-to singer to perform the song.

Frank Ippolito: When did you begin to find your voice?

Erica Cardenas: I’ve been singing as far back as I can remember. As a young girl, I was always singing around the house, in my room, in the shower. I remember as a little girl, probably around the age of 4 or 5, always singing and belting out the song, “Tomorrow,” from the 1980’s movie, “Annie.” That was one of my favorite songs! I never sang publicly, though, I was always too embarrassed and too shy, which I definitely regret now.

How did you choose a song, that historically is the hardest to sing?

I kind of like to say that the ‘National Anthem’ chose ME! I sang in my very first school talent show when I was 14-years-old. At the time a girlfriend and I sang “His Eye Is On The Sparrow,” still one of my favorite songs to this day. I believe that was my first ‘real’ public singing performance. Well, a few years later, as a Junior in high school, another girlfriend of mine remembered that very same talent show performance and that I could sing, and she asked me if I wanted to sing the National Anthem with her for the Senior high school graduation that year. I was hesitant, but I agreed. Little did I know that would be my first of literally more than 100 public National Anthem performances!

How long did you practice before you sang for the first time?

I remember my girlfriend and I practicing several times a week for about a month for that very first performance. The following year as a Senior in high school, we sang the National Anthem again, but for our own graduation. After high school, I took a National Anthem ‘sabbatical,’ and didn’t perform the song again publicly for about three or four years.

Ever forget the words?

I’ve never forgotten the words, although that thought often does cross my mind! I will say to this day, I still get butterflies before I sing, I don’t think those pre-performance ‘jitters’ will ever fully go away.

Ever take a crack at any other Anthem, you know, like the Mexican Anthem? Ever sing it in Spanish?

I’ve never sang any other Anthem, only the US Anthem in English. I actually have thought about learning the Mexican National Anthem, though, just for fun! Who knows, might come in handy one day…

What are some of the venues you sang the Anthem?

Boy, I’ve performed the National Anthem in probably more than 75 venues between the year 2007 and today. I’ve sang the song for every type of community event you could think of from business luncheons, to 5K Walks and sporting events, both big and small. I’m a regular National Anthem performer for the Arizona Diamondbacks, the Phoenix Suns, the Phoenix Mercury and more.

Do you sing any other song in public?

I’ve sang a song here and there publicly, other than the Anthem, but up to this point I’d have to say the National Anthem has been, and is, my signature piece! Actually, I’m going to start singing here in the next few weeks with the band from my church, so I’m pretty excited about that!

What would be your advice to someone who wants to sing this song?

Practice makes perfect! Actually, there are so many variations and styles that one could sing the National Anthem, but my advice is to just make it your own and have fun. For me personally, singing the Anthem is really an honor and privilege, so I view it as such with each and every performance.
_

Visit her website to find out more about Erica Cardenas. You can also watch Erica perform the anthem here.