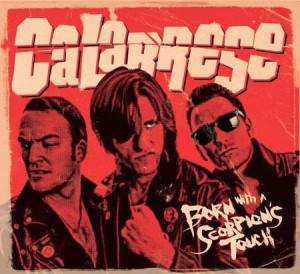 Arriving just in time to give your Halloween Party playlist a swift left to the jaw, Calabrese’s newest (and arguably best) album Born With A Scorpion’s Touch will paralyze you with venomous wonder.

And yes, I do realize that with each subsequent Calabrese release we end up saying it’s their best effort yet, but I mean c’mon, have you heard this thing? It exemplifies what good artists do: refining their ideas, image, and craft into an ever-better version of themselves. With each Calabrese release, the audience discovers just truly what these brothers are capable of in the “horror-core” genre. This isn’t just music, this is their life.

Consistent themes bookmark Scorpion’s Touch. With tracks such as “American Rebel Death Riders”, “Ride With The Living Dead”, and “There Is An Evil Inside”, you get the idea that these songs are meant to “reveal the shocking truth about motorcycles, rebellion and the occult!”

But it’s not campy. For those that think this is too tongue-in-cheek to be taken seriously or that it delves into the realms of the trite, you just haven’t heard good ol’ fashioned “American Rebel Rock and Roll.” The brother’s themselves are lighthearted, any follower of their social media can see that. However, when it comes to music, these boys are all business.

And what a business. With each album release there is a full website re-design, new cross-country tours with exclusive t-shirts, new music videos, and a whole host of goodies added to the Official Calabrese Store. These boys have been doing there thing for 10 years now and it shows. Like any band they want to continue to please the fans they have all while broadening their base –  and they do a good job too.

Still, when the brothers’ Calabrese sing “I Wanna Be A Vigilante” or “Born With A Scorpion’s Touch”, I believe ’em. When you hear them croon “I Ride Alone” or belt “Loner At Heart” you feel the path Calabrese has chosen to take. The music doesn’t lie.

With a couple of show dates at the end of this month including Nightmare in Mesa on Fri. Oct. 25th and in Tucson’s Plush Sun. Oct. 27th,  now is your chance to get bloody with Calabrese!
_