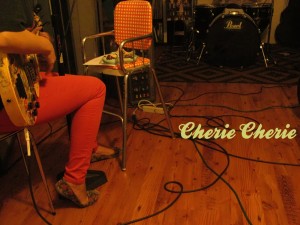 Night of the Living Fest is nearly upon us and we at YabYum couldn’t be more excited. First of all, we’re about any upstart festival that brings together bands like The People Under the Stairs, Deerhoof, THEESatisfaction, and Shannon & the Clams with some of the best bands to emerge from the Arizona underground like the Meat Puppets, NOBUNNY, Lenguas Largas, and, of course, Cherie Cherie.

Cherie Cherie just so happens to be my favorite band from this great state. True story. And I’ve been editing this here publication for nearly half a decade so if right now you’re thinking I haven’t heard your album, I probably have. Personal preference, people, and Cherie Cherie is mine.

This leads me to the second reason I was super excited to hear about Night of the Living Fest. It gave me an opportunity to go “Behind Closed Doors” with the band as they get ready for the festival and their upcoming release due out later this year. 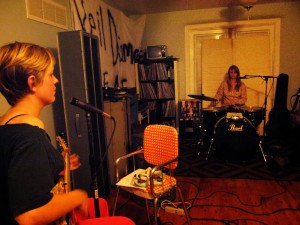 The band practices at singer/guitarist Lonna Kelly’s Phoenix digs. The home is colorful and cozy with a nod toward vintage that comes from keeping things rather than a cognitive style choice. The practice room is open and adorned with a spray painted banner reading “Neil Diamonds are Forever”. I am told that the band’s first performance was actually under this moniker and their first show was a performance of cover songs at the Crescent Ballroom wherein they performed Neil Diamond songs, naturally. Only then were they able to move forward into developing their own songs as Cherie Cherie.

Initially, Cherie Cherie started with just Lonna, Matt Wiser (lead guitar), and Ann Seletos (vocals/drums) but they recently filled out into a four-piece with the addition of Luke Mathers on bass and vocals.

Let’s just be honest right here from the get-go. It’s hard to think of bands that Lonna is in as anything other than “Lonna’s band”. Admittedly, she’s worked with some names (Giant Sand included) so there might be some exceptions when she’s only moonlighting rather than a regular fixture. For the most part, however, the audience will think of it as Lonna’s band. Some people are just like that, so compelling that everyone automatically assumes they’re the ringleader even when they’re not front and center. That’s just not the feel of Cherie Cherie. It has an almost familial atmosphere when the band plays together or even just hangs out with each other between songs. Ann and Lonna share the spotlight. They toss answers back and forth like they’re a family badminton game. One picks up the thread as the other trails off. There is a kindredness that comes across in conversation; a warmth. 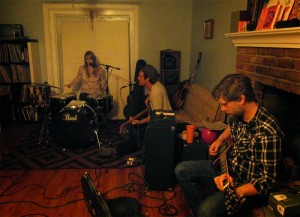 This warmth carries through to the music in the vocals in Cherie Cherie’s songs. They are the uplifting force that draw the listener through the darker undertones of the instrumentation. The juxtaposition of voices and music, light and dark, inviting yet still threatening in the way night can feel obscurely threatening.

For a band that’s only been together roughly since March, Cherie Cherie works seamlessly together. They’re getting some covers ready for Night of the Living Fest (not Neil Diamond covers) to include in their mix of songs that will be available on their forthcoming release due out later this year. Rumor has it that Nico’s “Fairest of the Seasons” might make the set list. Somehow, the idea of Cherie Cherie performing this Nico song reminds me of an inverted image of the band’s own music wherein the music is light and slightly ethereal while Nico’s voice provides the darker element. I can’t wait to hear it.

Cherie Cherie’s five-song EP is tentatively titled Share and isn’t due out until December but festival go-ers will be able to score the album early (if you didn’t already have enough reasons to head to Night of the Living Fest). I got to hear an early track from the EP called “Down Down Down”. Recorded in just two days in the same rehearsal space where we listened to the song, Ryan Breen recorded the tracks that were later mastered by Roger of SAE Mastering. The band was unanimously effusive about the experience, describing Breen as “totally positive” and “super cool but down to earth.” 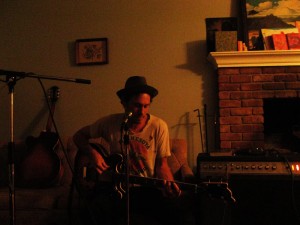 As for the decision to record all five tracks at Lonna’s home in just two days, the band was all in agreement: they wanted to capture their sound at a particular time in a particular place. The same space they gather every week to play together. It wasn’t about over-thinking things but about keeping things in the present.

And, at the present moment, Cherie Cherie is more focused on getting their set together for the festival only a few weeks away than they are about vinyl release looming ahead in December. We’ll be sure to keep you posted on Share. Until then, add catching the band live to your must-do list if you haven’t already.

Head out to Night of the Living Fest in Tucson on Saturday, November 2nd, and you’ll not only get to hear Cherie Cherie live but you’ll have your opportunity to buy an early copy of their forthcoming album before the rest of the schmucks who have to wait for the general release a month later. And you don’t have to pack up your camping gear and hot dogs for this one as it is a one-day-only event. Drive home that night or  you can stick around for Tucson’s annual All Souls Procession in honor of Day of the Dead also happening that weekend. 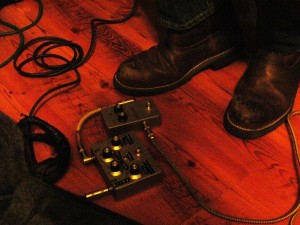 For more information, check out:
Cherie Cherie
Night of the Living Fest 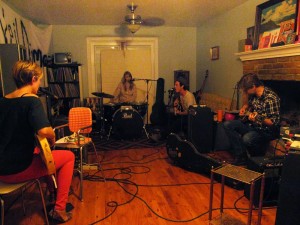 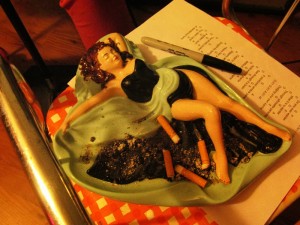