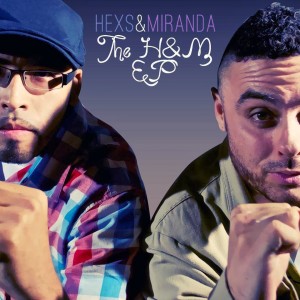 Dropping that old school flavor within a modern context, the superb combination of beat-master/producer Hexsagon and rap connoisseur Mr. David Miranda results in Hexs & Miranda and their first album, The H&M EP.  Now both of these gentlemen have been in the Phoenix rap game for quite some time but as Hexsagon put it on his Facebook page, “We took a different approach on this project and stepped outside the box.” I believe it shows. With throwback references a-plenty, tracks such as opener “Like The 80’s” and single “Down” are party head-bobbers while “We Go Far” and “Dreams Now” focus on the more serious side of hiphop all while maintaining a chill vibe. “Pushin’ A Benz” and “I Don’t Know” showcase a lighter, comedic side to the duo which I really connected with. With both of them consistently releasing music under their own monikers, I hope to see Hexs & Miranda release more music in the future. Listen to their EP here.

The Stakes are good. I mean really good. Reminding me of past Phoenix live hiphop act Antedote or even Drunken Immortals and Cousins of the Wize, the Stakes are a full band that definitely shakes things up. I just so happened to catch the Stakes at Bud’s Glass Joint during this past September’s First Friday and boy was I impressed. Comprising of Emcee’s ZeeDubb and Lord Kash, vocalist Beth Jeffress, pianist Ben Scolaro, guitarist Caleb Veazey, bassist Alex Meltzer, and drummer Kevin Phillips, the Stakes lay down that stoned soul picnic kind of music for sure.With smart lyrics and musicianship, I strongly recommend heading to the band’s SoundCloud page to hear a recent live set. With their debut, full-length album set to drop in the spring of 2014 engineered and produced by Clarke Rigsby, this is one Stakes fan that can’t wait!

When I first checked out THC’s music on their Bandcamp page, what I noticed first was the extensive use of the number 432. Not only is it the name of their debut EP, the price of the album is $4.32, and it was described as being recorded in 432 Hz. Now I don’t know about you but I had to look into this. So while I put the album on and began grooving to “Sense,” I did a quick internet search on 432 Hz. At least I thought it would be quick. I ended up falling down the rabbit hole of Pythagorean tuning and the conspiracy behind switching the note of “A” from 432 Hz to 440 Hz (and thus every note by a difference of 8 Hz) following the persuasion of J.C. Deagan (inventor of the xylophone, aluminum chimes, orchestra bells, marimba and many other instruments) and Nazi propaganda minister Joseph Goebbels. Sounds nuts right? Well apparently music in “A432” frequency provides a natural resonance throughout the body and that the seemingly ever-present degradation of our American society is due to the fact that music for the last 100 years or so has all been in “A440” and it has slowly demoralized our entire state with the universe. By the time I got to “Yoga Butt”, the last track of 5 songs, I was completely hooked on THC’s Slighly Stoopid-esque vibe and neck deep in researching the 432 Hz phenomenon! Thanks a lot, Hourglass Cats. Check out their EP here.