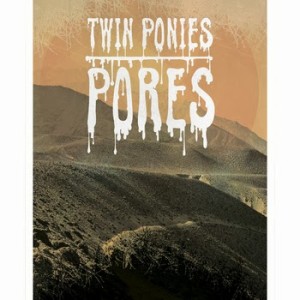 It appears that the band Tugboat has sailed back into port, kinda.

The former members of that defunct band, Wayne Jones, Phillip Hanna and Jordan Tompkins, along with newcomer Jason Lauxman, have formed Twin Ponies. And their new EP Pores has got them sailing in a very good direction.

Too many times when a band reunites, they ultimately repeat the past, but from the very first track, “Muggers,” Twin Ponies show they have no intention of doing that.

Jones, lead vocalist, (who gives a strong performance throughout the 4 track EP), hasn’t missed a step since we last heard him. Melancholy but strong. Wanting, yet easily capable of drawing the listener in. His voice perfectly fits the music.

The second track, “Phallacy”, is where one can hear what guitarist Lauxman brings to the party. His melodic styling lifts and pushes the music forward without getting in the way. Well done, sir.

“Cool Jeans” and “Willoughby” explore a more alternative sound, but what I enjoyed is that here the guys really have put their mark on the songs.

Lest I forget to mention Hanna on bass/synthesizer, and Tompkins on drums. You tell that these gentlemen are completely in sync with each other. The melodies and the breaks are very well written and executed.

Overall, I’m digging this, (and still have the album on repeat). Twin Ponies took what was terrific about the past and are charging full steam ahead in new directions.

The format for release adds an interesting texture to the Twin Ponies’ EP. Rather than offering fans the always cool vinyl option or the re-emergent cassette, the band is releasing Pores in a 5×7 coil bound song book. Digital download is included for those of you who might not actually want to play the music and would rather simply listen to the band performing their own tracks.

Head out to the Rogue tonight to score your own copy of Pores, the song book, and catch Twin Ponies live. Captain Squeegee, the Electric Blankets, and Celebration Guns will be joining in the festivities.