I made it out to Night One of the Northern Hustle release extravaganza last weekend and helped the band “break spring” which involved beach balls and good times all around. From the intro of Forgether onward, the rustic rhythms and poetic lyricism of Northern Hustle envelope the listener in an aura of childhood and mystery and warmth. By “Homestead” you should have just enough listening time to carve out a niche for yourself among the Northern Hustle fanbase, particularly for you Mumford fans, but I guess Mumford & Sons is the go-to reference these days for earthy, heartfelt folk rock.

Before you start thinking Forgether is all lighthearted, feel-good jam, I must say nay. The album promotes somber reflections that can leave the listener in a pensive mood of half-remembered moments and bittersweet nostalgia as heard in “Empty Notes” and “Weak Mouth”. “Tangled” might just be my favorite track on the album; the dynamic musicality swirls around you as the lyrics draw you into the hidden regions of heart and mind. The album ends on a angsty note, sort of like childhood too, I suppose. “Alma” punctures the final magical layer and returns you to the earth charged.

Northern Hustle started as a collaborative project between Johnathan Malfabon and Drew Dunlap but was expanded to include Bradley Kleeman and Max Barrezueta. The added players definitely give a fullness to the album that adds to its playful, campfire atmosphere which helps it achieve an overall sense of community and togetherness.

Forgether is decidedly worth hearing (and owning) and you can do so right here. I also recommend getting out to see the band perform live as soon as possible if you have not done so already. Northern Hustle will be playing a couple more Arizona releases we’re excited about including Lushfest with Future Loves Past this weekend and Jared & the Mill’s release on September 19th. Feetie pajamas may or may not be involved. 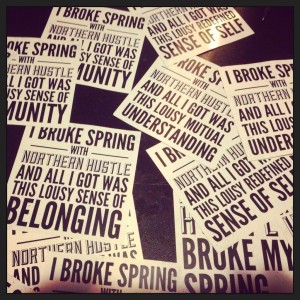