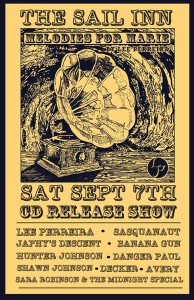 Melodies for Marie is singer/songwriter Lee Perreira’s brand spanking new EP and he’s throwing a release party on Saturday, September 7 at The Sail Inn. He’ll be bringing along some of his friends like Danger Paul, Avery, Banana Gun, Decker., Sara Robinson and the Midnight Special and more.

Adding to the fun, Dust Circuit Radio will be broadcasting live from the venue – an event that looks to be an all-around great night for music.

Originally from Long Beach, Perreira mixes blues, folk, and rock with his unmistakable voice and has turned out a very, very good album.

Working with Grammy-winning producer and Engineer Joshua “Igloo” Monroy and songwriter Shannon Brown, Melodies for Marie (dedicated to his grandmother) is a very personal record. It made over seven days in the recording studio for the six songs, but it has been in a year in the making.

Opener “Red Water Calling” is straight-up blues with slide guitar. “Run From the Rose” and “Spider Dress” take a hard rock turn and, if you like Pearl Jam, you’re gonna love these tracks. “Thievin’ Man” and “Vaudville Slide” show Perreira’s versatility, taking on ol’ time swing and put it squarely in the now. And finally, “Dear Marie,” a Delta Blues love letter to his grandmother completely encapsulates his songwriting abilities.

This solo artist stuff is new for Perreira. He has been performing in bands since he began writing and singing. He told me now that the new record is completed, he’s ready to do it all again.

Lee Perreira’s CD release party will be on Saturday, September 7 at The Sail Inn. Click here for event info.