Jacob Meders is drawing a line.

Local artist Jacob Meders’ work focuses on altered perceptions of place, culture, and identity as they relate to the assimilation and homogenization of indigenous peoples. His exceptional and thought-provoking work has been shown in Agents of Change: An Exhibition of Artists’ Books and Prints With a Social Conscience in Gallery 31 at the Corcoran, Washington, DC; Something Old, Something New: Nothing Borrowed: Recent Acquisitions From the Heard Museum Collection at the Heard Museum in Phoenix, Arizona; Illustrious at the Heard Museum North Scottsdale in Scottsdale, Arizona; and Transcending Traditions at the Mesa Contemporary Arts Museum in Mesa, Arizona.

When I visited him in his studio, Meders, a member of the Mechoopda Indian tribe of Chico Rancheria, California, was preparing to travel to Santa Fe, New Mexico, to show his latest work, Divided Lines, at the Museum of Contemporary Native Arts.

Divided Lines takes a pointed and thoughtful look at historical events. As Meders puts it, “History was either oral or through the written word, and many times the events, specifically the accuracy, was . . . misrepresented.”

Creating conversation with his art is one of Meders’ main goals. He begins the creative process using his personal experiences as a Native individual and carries this dialogue as it relates to the viewers of his work. 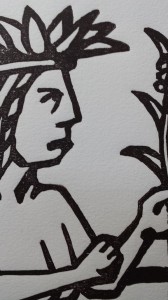 “Some of the dialogue that I try to depict in some of my works, they relate to other cultures in other parts of the world in different times or in current times. A lot of the imagery is Native or indigenous people in North America, but I try to allow the art to be approachable enough for people who aren’t that to insert themselves into the piece and let the dialogue begin,” Meders says.

Composed of five panels printed as one long piece, Divided Lines, the 15th-century-inspired woodcut print, depicts Native peoples with bodies split at the torso – one half Native, the other European.

“The woodcut or an oral presentation was the historical document at the time, but rarely was it ever accurate, or wasn’t intended to be accurate, possibly, so the split torsos represent assimilation or homogenization or adapting to the European culture. So these divided images represent the idea that people see things differently depending on which side you’re on,” Meders says.

Using these prints as a symbol of western knowledge and the linear mind, Meders challenges the historical accuracy of events and asks viewers to rethink and maybe even change their opinions about what transpired.