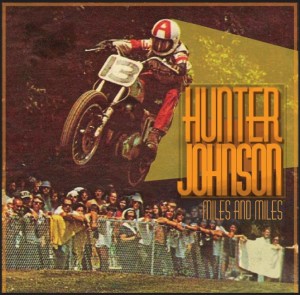 I grew up in a time when Lynryd Skynyrd and Pure Prairie League owned the airwaves and after listening to Miles and Miles, the latest release from Hunter Johnson, I believe he and I have that in common. He holds to those songwriting traditions: honest, salt-of-the-earth, and heartfelt but not sappy with sentiment. Miles and Miles, the follow-up to a collection of early tracks called The Very First, marks the first full-length studio album from the Phoenix singer-songwriter.

The album kicks off with “So Long Suzy”, a rollicking anti-marriage anthem (written in third person for anyone that might get huffy) certain to thrill many a drinking crowd. By “The Younger Me”, Hunter’s more soulful side begins to shine through, reminiscing over the free-spirited, unencumbered days of youth.

The album’s title track and “She Ran Away from Everyone” both showcase Johnson’s ability as a storyteller skilled in songcraft. The album doesn’t dwell in slow-moving ditties, however. There are plenty of ruckus bar ballad moments to carry the tough guys through, like the track “Lay Your Burden on Me”. Miles and Miles definitely has more of a Southern Rock feel than a lot of the desert rock one hears around town, but I can definitely get behind a rock album that doesn’t have to be prefaced with indie coming out of this town.

Recorded at Flying Blanket, Hunter Johnson gathered a stellar cast of players for his album including guitarist Jason McGraw, bassist Tom Stuart, and John Rickard on peddle steel and dobro. Bob Hoag and Danny Aday both drum on Miles and Miles, as well. Listen and purchase the new album now available right here.

For more Hunter Johnson good times, I also suggest checking out the artist live on the Airstream Sessions from Last Exit Live, right here. And don’t forget to head out to the release on September 22nd at the Ice House Tavern!!!