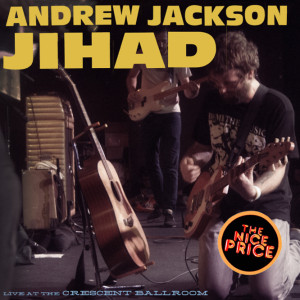 On the final night of Andrew Jackson Jihad’s chaotic 2012 tour, the band played their hometown and recorded the event so all you disappointed bastards who could not attend might share in the glory of the evening, while those who were there might relive the memory again and again. Live at the Crescent Ballroom is chalk full of AJJ goodness at a whopping 25 songs, banter included, but not to fluff the track count.

The album ironically opens with the song “We Didn’t Come Here to Rock” because that’s exactly what they do for the ensuing hour. The collection includes a few new tracks in the mix, but I was super excited to discover quite a few of my favorites from Knife Man on the album. I was a late arrival to the Andrew Jackson Jihad party, as much as it shames me to admit, but I consider Knife Man a changing point in my life, musically and philosophically.

Andrew Jackson Jihad is comprised of Sean Bonnette and Ben Gallaty but the duo was joined but a full cast for the tour and live album. Deacon Batchelor, Preston Bryant, Dylan Cook, and Jeff Rosenstock all appear on Live at the Crescent Ballroom, giving the fullness of a studio album to the band’s usually stripped-down live show.

Live at the Crescent Ballroom captures not only the band’s performance energy with the adage of an enthusiastic hometown crowd, but also the honesty of personal presence which carries through to the recording, complete with everything from impromptu quips and hometown sentiments to salad gloves and gender pronouns. And, yes, the secret of the salad glove is revealed on “People II 2: Still Peoplin'” with a tag line certain to secure millions in sales. I’m not telling you what it is. You’ll have to listen to know what I know.

The recording was done by Jalipaz of Audioconfusion and Matt Higuera with house sound provided by Andrew Winhold. Keep these names in mind because the recording sounds amazing for a live recording. Sorry to other local bands with live albums but they usually have some level of sucky sound to first be overcome before listening pleasure can kick in. That’s not to say the album is entirely pristine, but the minor quirks only add to the sense of being there rather than detracting from the overall listen-ability.

The band gives a deserved shout-out to Jalipaz after “Bad Bad Things” and I love that the rest of the world might spend a moment pondering what exactly a Jalipaz is before being swept under the sorrows of “Back Pack”, the following track on the album.

Highlights from the album definitely include the new song “#armageddon”, to attach AJJ’s painful present-day observations to a trending topic. “Black Dog”, also a new track, was an unexpected gem on Live at the Crescent Ballroom – a tribute to Ben’s dog running just over a minute presents one of the album’s tenderest moments.

“Inner City Basehead History Teacher” appears on the album as well as on the Bringin it Together Like Pangaea limited edition compilation available on vinyl with other some other Arizona artists like Treasure Mammal and Roar.

The album ends on a powerful note with the shout-it-out anthem “Big Bird” and I think the band should personally apologize to all my neighbors for the noise disturbance that has resulted.

“It’s good to be home,” Sean Bonnette says on Live at the Crescent. To which we say, “Come home anytime.” But until Phoenix, the city of their youth, can reclaim the members of Andrew Jackson Jihad at least we have Live at the Crescent Ballroom to remind us of all the good times had. Listen and purchase the digital album here. I personally recommend scoring one of the limited edition vinyl pressings from Asian Man Records before they run out. Available right here.