Local band Sundressed bathes its music in a little folk-y jangle with furious moments of punk plus terrific lyrics and vocals. And thanks to that combination, guitarist/vocalist Trevor Hedges, lead guitarist Tyler Kees, bassist Evan Kees, drummer Garrett Tretta and guitarist/vocalist Ryan Osterman are building quite a following and are ready to take their popularity to the next level.

Frank: What was the most gratifying thing about recording your new record, Whiskey with Milk?

Hearing it back at the end and having it sound exactly like us! Jalipaz (of Audioconfusion) had the ear for what we needed and made it happen, couldn’t recommend that guy more!

This is a very personal album for you, right, Trevor?

Yes, Some of the lyrics were even written long before Sundressed formed. Lyrically it’s a culmination of addiction, getting clean and sober (4.5 years sober now), heartbreak, bouts of spirituality, etc. It’s hard for me to write songs that aren’t personal; I’ve never been good at telling someone else’s story. 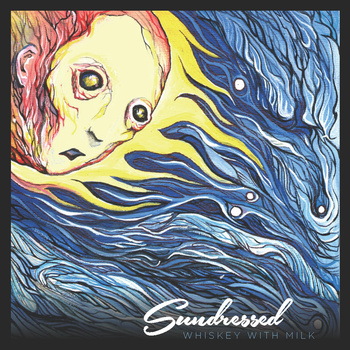 You guys play a lot of shows, how has the response been?

We’ve had some killer shows over these two years and the response has been great! Especially playing with more notable touring bands recently like the Front Bottoms, we’ve gotten to reach a new younger audience – it’s been awesome!

Tell me a little about your new video.

Well, we picked “Paper Cups” based on popular demand. We had wanted to do a video with Cory Davis (the man with the yellow box) for quite a while now and we finally booked him once he got back from Warped Tour. It’s a very simple video, which showcases Cory’s incredible camera work and editing. Not to mention, he had a rough edit for us the morning after we had been filming all night! The guy rules!

Where did you guys shoot it?

It was filmed at Mind’s Eye studio in Mesa. Shot and edited by Cory Davis.

How much fun was that?

It was super fun! Cory kept telling us to make sure our guitars were tuned, even though we weren’t even plugged in! You can’t see it in the video because its dark, but the room had some strange decor, like nets of mutilated Cabbage Patch Dolls hanging from the ceiling. It was pretty metal.

What’s next for you cats?

We are currently rehearsing new songs for another EP that will be put out on vinyl early next year, and then we will be going on our first tour to the east coast. Lots of details need to fall into place, but we have some pretty sweet stuff set up already [and] cant wait!

Sundressed will be playing at the Crescent Ballroom on September 12th.

Sundressed can be found here.