Way back when in 1440, Johannes Gutenberg revolutionized the printing process by inventing a process with movable type. Then, taking inspiration from the movement of a wine press (history does not record just how much vino Heir Gutenberg drank while studying the press), he created the modern printing process.

Fast forward several centuries and a world away to a small design studio in Phoenix, Arizona and you’ll find Jon Arvizu reviving that old world technique creating some of the most unique art in Phoenix and beyond.

Saturday morning cartoons, comic books, Cracker Jacks and Bazooka Joe were just some of Jon’s earliest influences as a kid. It was early on that he knew he wanted to create art. And, if you owned a Fossil watch (I know I did), you probably were already introduced to his designs and illustrations because he was responsible for creating the art for the tin packaging.

Jon greeted me at his Trapdoor Studio along with his dog, Baxter, a wiener dog that loves licking the floor and did so throughout the interview.

The studio’s wall is lined with art Jon has created using a process he discovered by necessity, and perfected, mono screen printing. But we’ll get back to that.

As I mentioned before, if you owned a Fossil watch, you probably saw some of Jon’s earliest illustrations on

some of the tin packaging. From there he struck out on his own in 2002. But he grew bored sitting in front of the computer so he went looking for something more hands-on, more tactile. He took a letterpress class at The Paper Studio in Tempe.

“They had all these letter presses, right, and this guy who taught the class did these great flyers,” Jon said. “It was very cool. So I went out and bought this little letterpress from the 60s, but I couldn’t get a good impression. So, in the 70s, letterpress press studios were going out of style, and I met this guy who had all these presses. So I bought this Challenge-Gordon that was made in the 1890s.”

Baxter was still licking the floor as Arvizu gave me a demonstration on how he uses the press to imprint business cards, posters and more. With his foot, he pushed up and down on a pedal that moved rollers that moved over ink that inked the mold of the design and eventually pressed a plate against paper. And, with great timing and precise placement, he would take out the printed card and place a blank one in its place.

With this technique, he has managed to create some wonderful business cards, posters, and prints – all one-of-kind due to the imprecise nature of the press.

“But, as you can see, it’s time consuming. And to make money on a project using the press, well, you just don’t.”

Baxter was still licking the floor.

“Yeah, mono screen printing, I love it. I took a screen printing class. And most of the people in it were painters, and I’m not a painter, I mean I can paint, but I am more comfortable drawing something, refining it on the computer, making a stencil then painting. So I messed around for a couple of classes, but then it hit me: What if I cut stencils by hand and use them to screen print.”

The results are amazing.

Consequently, and thanks again to the imprecise nature of the process, each and every print is unique. He said he has used up to 9 stencils on just one piece. And, with every pull of the squeegee, he can determine where to put pressure to ensure an outcome he likes. A process he’s been perfecting for three years.

“I’ve mashed and mashed and mashed ink into a piece. But the challenge is, once that stencil is done, it’s done – and that means I have to start over. You know, I’m not doing this to make a thousand copies of something. The beauty of this is that it’s all hand-done, in a limited way with attention to detail,” he said. 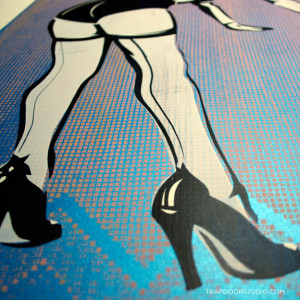 Jon’s art is truly unique, because, well, it is unique. He brought out several prints of “Bad Habit” and not one was identical. He has even gone so far as using lace as one of his stencils to create a “garter” feel for his piece “Boom Chicka.”

His art was recently shown at monOrchid and he even finds time to create and donate pieces to auctions that support worthy causes like, Xico, a multidisciplinary art organization that promotes indigenous arts and culture through art. His prints fetched over $1,500.

I got my eye on “El Valiente” and Jon guarantees me there’s not another one like it. Even if he prints several.

And, yes, Baxter was still licking the floor.

Jon’s art can be found here where you can purchase his prints online.