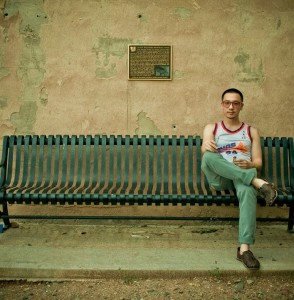 “Being named Fred and being Asian are two things I’ve been teased about and sometimes can laugh about,” said Fredrick Huang, multi-instrumentalist for the Of The Painter Choir, and now soloist.

Asian Fred is Huang’s new solo project and “Say If You Will” is his single from that effort – and I can’t wait until the second one comes around, because it’s sterling.

Fredrick, or Fred, formed Of The Painted Choir in 2008 after relocating from Tucson where he worked with Tucson-based artists when he was working at Wavelab Studios.

I asked him how does Asian Fred differ from OTPC.

“The writing process is different,” he said, “OTPC songs are built around melodies, so I usually have a song more or less complete, and then bring it to the band and we build the rest of it. The guys are so talented. It’s exciting to hear their interpretations of the songs and get their input. Stylistically, OTPC is folky, 60s rock n roll, vintage. With Asian Fred, I’m going for a more groove-oriented feel. The songs are built around drums and bass. With “Say If You Will” I started recording without a concrete idea of what it was going to become.”

The song has a real Motown feel to it, doesn’t it?

That’s what I’m aiming for. Although a lot of people are doing that right now, I’m trying to find ways to set myself apart.

Holding to his DIY recording approach he used in Of The Painted Choir, Huang played all the parts on the song. Personally I find that completely fascinating. He plans to have featured guests musicians down the road, but his main concern now is writing new music for both Asian Fred and OTPC.

“OTPC is still playing shows, and we’ve talked about recording again soon. I just wrote a new song I’m really stoked on – it came right out the blue. I’m excited to get together with the band and hear their take on it,” he said.

As far as inspiration, Fredrick draws from people he knows and every day experiences. Even, from Bob Ross. Yes, the painter on PBS.

“I was working from home last week and I had PBS on the TV – anyway, Bob Ross said something like, “My uncle used to tell me the best way to catch a rabbit is to hide behind the hen house and make a noise like a carrot. And when it comes around just grab it” – I have no idea how that pertains to this question but I laughed and thought maybe I can turn that into a love song or something.”

I can’t really praise “Say If You Will” enough. I’ve listened to it a dozen times and I hear something new every time. That’s certainly credit to Huang’s talent, no doubt, and the self-recording style he employs – a method that gives this artist the freedom to experiment and push the limits of creativity.

“Say If You Will” can be streamed and downloaded for free here.