I may be the least adventurous of the writers at YabYum. I guess I’m just a homebody. I’d rather stay home and watch Blade Runner than go to an amazing party. But sometimes…

Sometimes I leave the house. I’ll be talking about the places I go in this column. We at YabYum we’ll be bringing you our (roughly) bi-weekly installment of some of our favorite local businesses around the Valley of the Sun and beyond. Starting now…

Nami, located on 7th St. and Palm, is a great first stop in the morning. Iced coffee is my litmus test at coffee shops, and theirs is great. And the place is set up for grabbing and going, so I don’t get tempted to lounge all day like I do in the more couch-heavy coffee shops.

That’s just the beginning. There are baked goods. Vegan baked goods because Nami is entirely vegan. They go from good (Captain Crunch-topped doughnut) to amazing (the Samoa bar). The latter is my favorite new dessert of the year. I’ve described it as a “revelation” multiple times in polite conversation.

All this and I haven’t even had their signature dish yet. Called a tsoynami, I’m still not 100% sure what it is. It looks to me like a really good Blizzard that vegans can enjoy. I look forward to giving it a try. 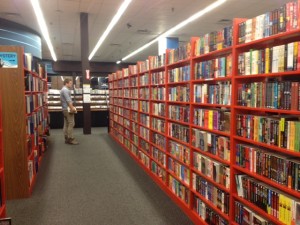 I am, like many of my generation, a media addict. Classic novels, 90s R&B albums, horror movies, whatever. Bookman’s is my most reliable dealer. I never have to wait for my fix. It’s all there. And since everything’s used, I can get a lot of it without going bankrupt.

The Phoenix location (19th Ave. and Northern) is my personal favorite. I can run in there, spend an hour, and come out with bags and bags of stuff. Where else could I get a copy of Mrs Dalloway and a Day of the Dead DVD, as well as almost impulse-buying a He-Man figure? 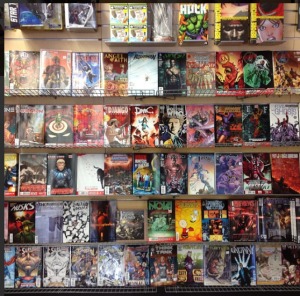 I got back into comics a couple of years ago now. Visiting Samurai Comics was what got me hooked. Friendly, knowledgeable staff and an inviting atmosphere brought me in. The selection of comics (new and old) keep me going back.

The 11th St. and Camelback location is my haunting ground. I’m there every week or two picking up the new books they set aside for me (it’s a free service, and it keeps me from freaking out about missing the new issue of Guardians of the Galaxy).

Samurai has a room of comics especially for kids, and they carry a bunch of collectibles. Something for everyone to nerd out on. They even have tournaments for Magic: The Gathering and YuGiOh card games.

Samurai has become a necessary part of my routine because, no matter how bad my week has been, there’s always New Comic Book Day. 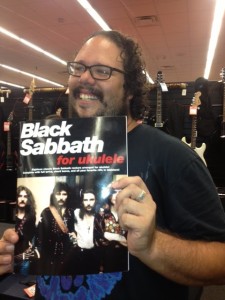 Look! We found both Black Sabbath for Ukelele and Joel Ekdahl of Exploding Oranges on a recent Bookman’s run. How rad is that? To follow along with more of our Arizona adventures please follow us on Instagram where all the above pictures originally appeared.