This summer, the Gelato Spot has teamed up with some of the Valley’s hotshot chefs to benefit the Phoenix Children’s Hospital by offering a Top Chef Flavor competition that kicked off this month. Every month this summer (June, July, & August), the Gelato Spot will be featuring three artisan handcrafted flavors created by visiting chefs. The contest ends in September and the winner will present a $5,000 donation on their behalf to Phoenix Children’s Hospital.

Now, what exactly is gelato? When I asked a friend of mine in ‘the industry’ (yes, the gelato industry) to explain the relationship between gelato and ice cream this was the answer I received: gelato is sexy ice cream. I tried to move this one around in my brain. Sure, my favorite ice cream memories usually centered around fondly recalled childhood moments. The family at the ice cream parlor unexpectedly on a school night with tin roof sundaes. Drumsticks from the ice cream truck in summers. Grandpa’s heaping cones of butter pecan doled out on visits to their house. Ice cream is comforting and indulgent and decidedly not hot. 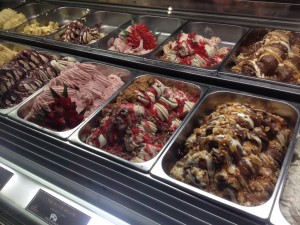 Gelato, on the other hand, is a sensual indulgence. This falsely nicknamed “Italian ice cream” uses more whole milk than cream to achieve a delicacy lower in fat but somehow richer in consistency than ice cream. Part of this also has to do with the slow-churned speed of gelato which allows for less air in the mixture and results in a lusciously denser, silkier concoction.

The Gelato Spot, also known as the G-Spot, approaches frozen delights from the sensuous side. They offer Epicurean experiences for the cultured palate as well as a scoop of bubble gum for the kiddos or chocolate for the staunch traditionalist.

This Top Chef Flavor competition seems set to solidify the G-Spot as a Valley tastemaker for their innovative approach to summer. The editorial staff dropped in for a sampling of the flavors set to be unveiled over the summer. Owner Tommy Plato set forth nine separate cups, each containing a perfectly scooped and adorned serving. The chefs requested that their flavors not be mixed so the flavor will not be obscured by any other tastes. Remember this is a contest, people.

Oh my goodness. Nothing quite prepared me for the distinctive deliciousness that followed. Picking a favorite will be so much harder than I ever thought possible. Thankfully, I can pick one for each month!

June’s flavors include the Arizona Drunken Date Cake created by Payton Curry of BratHaus, Tracy Dempsey’s (of  Tracy Dempsy Originals) Shoyu Caramel Chocolate with Candied Coconut Peanut Streusel & Toasted Marshmallow Sauce, and Bananas Foster with Aji Amarillo. The most surprising flavor of summer is perhaps the Banana Foster with Aji Amarillo from Matt Carter, chef at The Mission and Zinc Bistro. The sweet of the Banana Foster is followed by the slow spice of the aji amarillo for a well-developed and carefully crafted flavor experience. The Arizona Drunken Date Cake – think medjool dates not sorority girls – is an early favorite among patrons and YabYum staffers.

In July patrons will have the opportunity to sample The Elvis envisioned by Keen Bosworth and Joshua Reisner of Pig & Pickle which combines banana, strawberry sauce, and a cookie crunch with a strong bacon finish. Yes, bacon. Also available in July are the The PB & J (Peanut Butter with Raspberry Port Brown Butter Sauce, to be exact) from Chef James Fox of Bootleggers and, my personal favorite, the Olive Oil with Lemon Zest & Stracciatella from Cullen Campbell of Crudo which is served with a fresh sprig of rosemary. Something about the subtle hues of olive oil and lemon zest lead me to describe the flavor as graceful and then I’m left thinking, “Did I just describe my dessert as graceful?” Yes! 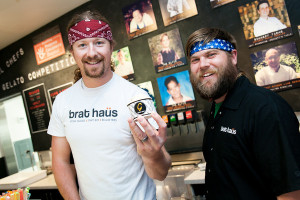 August introduces the final three flavors of the contest. The Strawberry Miso from Chef Josh Hebert of Posh elevates traditional strawberry to whole new levels with the addition of the ever so slightly salty miso. Walter Sterling offers the only sorbet found in the mix; a delightfully refreshing medley of Coconut, Lime, and Ginger. The Schnepf Farms Peach Cobbler from Chefs Justin Beckett and Jeff Schoening of Beckett’s Table perfectly captures the intricate flavor of fresh Southern pie made with ripe peaches locally grown.

There are several ways to vote. A point is given for each vote sent by text message or every mentioned favorite on Yelp or Facebook. A point is also given for every scoop sold and six points for each party pack so your purchasing power holds sway. Plan a visit to any of the Gelato Spot’s Valley locations. Actually plan at least three trips, one per month, to sample all the summer flavors. Start tonight with the location on 32nd Street and Camelback Road where the featured chefs for June will be discussing their creations and offering tastings from 6:30 to 9PM.